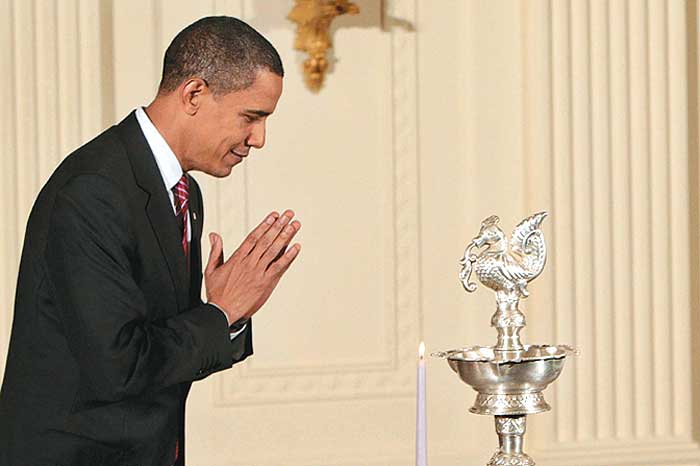 AP
Lamp-Lit: At a Diwali function at the White House in 2009
obama visit
Namaste India
Barack Obama's nod to India will get us due recognition—if not momentous deals
Pranay Sharma
http://www.outlookindia.com/article.aspx?267720

It isn't every year that the president of the most powerful country comes calling on India. In fact, till a decade ago, most presidents of the United States of America didn't think India even deserved a stopover on their forays into Asia. Then, in 2000, Bill Clinton landed in New Delhi to charm the Indians and create a new mould for Indo-US relations, followed six years later by George W. Bush, who was rated as the best American president for India. In case you think the media should have become accustomed to the visit of American leaders, and are surprised at the buzz over Barack Obama's forthcoming visit to this land of Mahatma Gandhi (whom the American president considers an exemplary leader), then you have quite obviously missed the point: he is the first US president to visit this country in the first half of his first term in office. That by itself is a testimony to the importance of India in the global arena, its gradual rise as a power, its relevance to the superpower that's said to be on a possible decline.

This also explains why Obama's visit has been pitched as a defining moment in Indo-US relations. Forget those trite catchwords—Pakistan, Kashmir et al. Do not search for an idea comparable to the civil nuclear deal, crafted under the Bush administration, before you declare Obama's visit to India a success or otherwise. It's time to think big, sources say, and it can't get bigger than what Obama plans to unfold during his November 6-9 visit: project India as a power with a sinew impressive enough to partner the US not only in Asia but in the entire world, including an emerging Africa partnership.

Two major developments have prompted Obama to try and script a grand leap for India. One, the economic crisis which has cast most western economies into a tailspin. Two, the anxiety among many Asian countries engendered by the rise of an aggressive China. Agrees a senior official in the prime minister's office, "China's rise is the biggest thing that is happening around us." And when such a big change is under way, the Americans have to wake up and take stock. 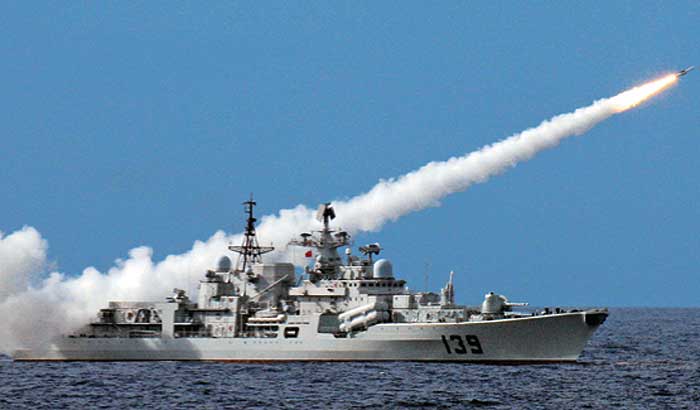 Obama did this exactly a year ago, embarking on his first trip to Asia that saw him hop from one country to another: Japan, Singapore, China and South Korea. In his Asia Security speech in Tokyo, Obama did not even mention India, not even in passing. This omission, even as he named other Asian powers, was not missed in New Delhi nor among its friends in Washington. Wasn't it terrible diplomacy to ignore India, asked American officials there. As a remedy, he chose Prime Minister Manmohan Singh as the first state guest of his presidency in November last year. And though Obama, sources say, showed great appreciation of Manmohan's views in their many subsequent meetings on the sidelines of multilateral events, there were many who remained sceptical whether the Indo-US strategic relationship would be elevated to a higher level under his presidency, as had been promised. Former foreign secretary K. Natwar Singh remains doubtful even today. "Borrowing the titles of two famous Charles Dickens novels, I can only describe his visit as 'Great Expectations' which will end up in 'Hard Times'."

A Look At The Presidential To-Do

In some ways, such scepticism is understandable, considering that Obama zeroed in on India for global partnership as a second choice. He had initially looked upon China as a natural partner with whom America could combine to manage the world. This choice couldn't be faulted. China is crucial to the US, holding as it does over a trillion dollars worth of American treasury bonds and being a partner in a bilateral trade totalling a whopping $330 billion. As a permanent member of the UN Security Council, China's help is needed to roll back Iran's controversial nuclear programme and deal with a recalcitrant nuclear-armed North Korea.

But then China began flexing its muscle, exploiting the economic crisis to surpass Japan as the world's second-largest economy and then staking unilateral claims over South China Sea and other islands in East and Southeast Asia. The other countries of the region, mostly close allies of the US, were not only alarmed but wondered whether the US was deliberately forsaking its role of a stabiliser in the Asia-Pacific and allowing China to carve its sphere of influence there. 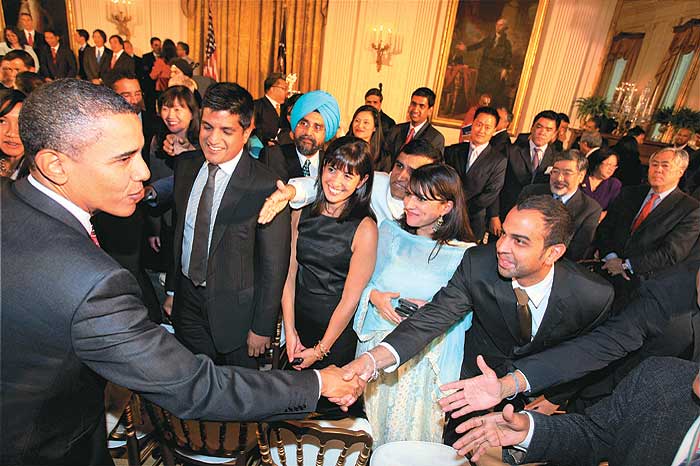 Courting India: Obama with Indian-origin Americans at an event.

Stung, the US began to cast its net for other options. India suited the American plan well, boasting as it does a large army and a blue-water navy that could ensure China didn't become the sole power to dominate the region, a veritable cradle of growing economies. And so when Obama lands in India, after visiting Rajghat in New Delhi, he and Manmohan will conduct a substantial dialogue on the implications of China's rise for Asia and the world at large. This dialogue, however, doesn't tantamount to forging an alliance against China. Says a senior Indian diplomat, "There's an element of competitiveness in both India and US's relations vis-a-vis China. But this should not be construed as attempts to gang up against China." Never mind that, as a US official points out, "India and the US have together held 50 defence exercises in the past few years, and this is just the beginning." The general wisdom is that instead of talking about containing China, Manmohan and Obama will discuss ways of enhancing their engagement with China. From Obama's perspective, the second-most important item on his agenda will be to deepen economic cooperation with India. Unable to pull his country out from the economic mire and likely to face reversals in the mid-term elections in November before he flies out for Asia, there are many who feel he will be under pressure to bag lucrative business contracts in India. And though mid-term electoral losses are quite normal for American presidents, the alarmists point to his many statements in which he cited outsourcing of American jobs to India as among the principal causes of unemployment. Officials, therefore, say he will try to gain greater access to the Indian market not only for American behemoths but also for small- and medium-scale enterprises, taking advantage of the buying capacity of the expanding middle class here. This could help Obama to convince people back home that relations with India are crucial to create jobs for Americans.

Agrees Arvind Subramanian, a senior fellow at the Peterson Institute for International Economics, Washington, "This is a serious issue. The overall climate for openness in the US is not great, especially for issues such as outsourcing. The fact that Indian companies contribute to the US economy helps but it does not fundamentally alter whether or not the US is inclined to take protectionist action." 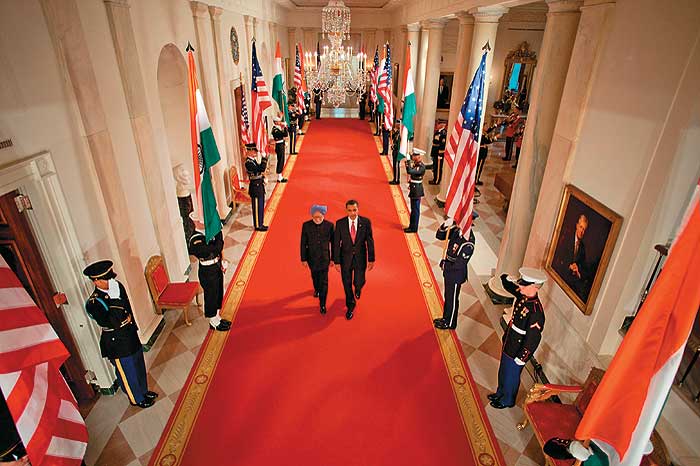 Eastern Manoeuvres: Obama with the Indian premier at the White House

No wonder, accompanying Obama is a huge business delegation comprising over 250 CEOs. The main focus of the Business Summit in Mumbai will be to contemplate steps for augmenting economic and trade cooperation that remains below $50 billion currently. In addition, the American suppliers will eye the lucrative defence market of India and cash in on New Delhi's drive to acquire sophisticated weaponry. Some arms deals are likely to be finalised during Obama's visit. Having pushed hard for lifting the nuclear apartheid against India, the US will naturally aim to grab a substantial share of the civil nuclear energy market in India, now that the last hurdle in implementing the nuclear deal has been swept aside.

Amidst fervent attempts to woo business in Mumbai, American sources say Obama will be provided a glimpse of India's progress in e-governance and panchayati raj. He's likely to be hooked live to a chaupal in session. Why isn't the media abuzz with speculation about a big-ticket deal? Partly, officials say, this is deliberate, aimed at lowering expectations to avoid disappointment. But the more significant reason is that a big-ticket idea can't be floated every time Indian and American leaders meet, that the nuclear deal was a game-changer and the gains have to be now consolidated, and that the thrust now is to have India and the US enter into global partnership.

To seed this global partnership, there are many Indian proposals on the table. To begin with, there is a desire to get univocal support from the US on India's candidature for a permanent seat in the UN Security Council, for inclusion in the Nuclear Suppliers Group, an India-specific review to remove hurdles in the way of high-tech transfers and taking off Indian organisations like ISRO and DRDO from the Entities List that hobbles them from accessing dual techonology. In addition, there will be an attempt to get the US seriously engaged in India's quest in fields as diverse as civil nuclear energy, green technology, agriculture, weather prediction for enhancing crop production and education.

Obama is expected to carve out a much bigger role for India in the immediate region, and more importantly, across the globe. The two sides are now contemplating to work together for poverty alleviation not only in India but also in the countries of Africa. A substantial role is likely to be defined for India in Afghanistan, testifying to Obama's acceptance that peace and stability there have a direct bearing on India's security. 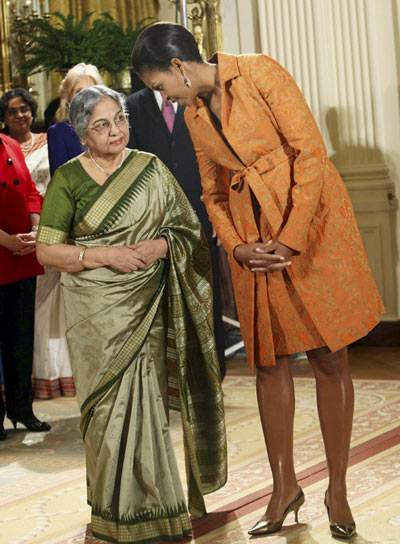 Obama's presence on Indian soil, more so in Mumbai, which was rocked by terror attacks in 2008, will inevitably drag terrorism into high-level talks. The US president will undertake powerful symbolic acts during his stay here, such as reading out a statement against terrorism and meeting the victims of 26/11. And though serious cooperation on counter-terrorism between India and the US is already under way, it is a moot point whether Washington can really stop Pakistan from supporting anti-India terror groups. The Americans desperately need Islamabad to stabilise Afghanistan, they can't just dump the Pakistanis. Says former foreign secretary Kanwal Sibal, "I don't think Obama's in a position to control Pakistan and prevent it from being selective in its fight against terrorist groups." Adds former ambassador Naresh Chandra, "Gestures like the recent military aid package to Pakistan only boost the morale of its military establishment. Extract as much from the US on technology, but don't expect much on the Pakistan front."

Ultimately, as the US plans to create space for India to play a global role, New Delhi shouldn't forget that it can't expect others to hold its hand to glory. India will have to understand America's compulsions in Afghanistan, and seize upon other opportunities to raise its profile as a great nation that's devoid of hunger and believes in progress for all.

Posted by Palash Biswas at 8:11 AM