Now ONGC is tagged with Reliance. Even after Tsunami on Indian sea coast line and Himalayan tsunami in Uttarakhand,even after Nepal earthquake and waiting for yet a series of more earthquake in the Himalayas,the business friendly RSS governance has made topmost priority to make India and the geopolitics radioactive killing field. Arun Jaitley exempts foreign investors from MAT; simple income tax returns form on way! Hindutva agenda of fascism is the reform agenda of ethnic cleansing! Palash Biswas

Now ONGC is tagged with Reliance.

Even after Tsunami on Indian sea coast line and Himalayan tsunami in Uttarakhand,even after Nepal earthquake and waiting for yet a series of more earthquake in the Himalayas,the business friendly RSS governance has made topmost priority to make India and the geopolitics radioactive killing field.

Hindutva agenda of fascism is the reform agenda of ethnic cleansing!

Hindutva agenda of fascism is the reform agenda of ethnic cleansing! Latest cabinet decisions proved it beyond doubt.Rating agencies insist that the emerging make economy should be opened up with its doors and windows ajar to make this country a fascist gas camber.Rating is linked with reforms,pardon ,no with the so much so hyped growth rate!

Rating is linked with reforms,pardon ,no with the so much so hyped growth rate!Arun Jaitley offered tax relief to FIIs and announced that an "extremely simplified" income tax returns form will soon replace the controversial ITR.

Celebration times for all the money machines as Global agency Moody's today said any upgrade in India's sovereign rating will depend on implementation of policies by its leaders to improve business environment for private sector and for infrastructure growth.Mind you,Moody's, which has given the lowest investment grade rating to India, named regulatory complexity and weak social and physical infrastructure as challenges before the country.

Nepal Earthquake is being misused to make the strategically very very important Himalayas as permanent war zone beyond borders killing man and nature.Government of India has taken over the governance there as RSS network has been deputed to lead the rescue and relief operation.

Mind you,With Modi seated beside him in Lok Sabha, Jaitley took potshots at Gandhi and Congress who have been targeting the Prime Minister for his frequent foreign tours.

Even after Tsunami on Indian sea coast line and Himalayan tsunami in Uttarakhand,even after Nepal earthquake and waiting for yet a series of more earthquake in the Himalayas,the business friendly RSS goevrnance has made topmost priority to make India and the geopolitics radioactive killing field.

Thus,fifty smart cities get the cabinet clearance with full tax holiday for foreign investors and interests.The tax forgone is not a part of revenue and financial deficit statics at all nor the militarization of the state,privatization of defense and the arms shopping have to be considered to manage Indian Economy.

Now Reliance gets the permission to develop oil discobveries and the decision is justified as ONGC is tagged with it.Media reports say that the government has removed a key regulatory hurdle that virtually prevented the start of production in a dozen natural gas discoveries, a move that would allow ONGC and Reliance Industries, the country's two largest hydrocarbon producers, to try and monetise an estimated 90 billion cubic metres of gas.

ONGC his on top in the disinvestment list since Arun Shourie times and ONGC discoveries have been gifted away to desi videsi companies.Now ONGC, to be sold off sooner or later, is tagged with Reliance.

While these gas reserves at the current market price of domestic gas — $4.66 per million British thermal units on a gross calorific value basis — are worth more than Rs 1 lakh crore, the firms have been given three options regarding the regulatory requirement of conducting drill stem tests (DSTs) at the discovery sites. Practically giving relief to the firms from the Directorate General of Hydrocarbon's (DGH) diktat that DST is mandatory for commencement of production, the Cabinet Committee on Economic Affairs (CCEA) on Wednesday allowed the developers not to perform the expensive DST, but at their own risk, implying that any obligations arising out of a shortfall in output would have to be borne by them.Indian Express reports.

Seeking to calm investor jitters, Finance Minister Arun Jaitley today offered tax relief to FIIs by exempting some of their income from MAT and announced that an "extremely simplified" income tax returns form will soon replace the controversial 14-page ITR that sought details of all bank accounts and foreign trips.

Replying to the debate on the Finance Bill, 2015, in Lok Sabha, he said Prime Minister's social security schemes will be exempt from service tax and also tinkered with indirect tax rates on raw silk, iron ore and rubber.

With funds fleeing India as the row over 20 per cent minimum alternate tax (MAT) on capital gains they made in past three years escalated, Jaitley offered relief by exempting income foreign firms earned from securities transactions and interest, royalties and fees for technical service from MAT.

The exemption would apply only in those cases where the normal tax rate is below 18.5 per cent.

He, however, offered no relief retrospectively as has been demanded by foreign portfolio investors.

The rules for the application of MAT for real estate investment trusts were also eased.

Later, the Finance Bill was passed by voice vote, bringing to close the three-stage budget process in the House.

On the indirect tax side, export tax on low-grade iron ore was cut to 10 per cent from 30 per cent, in a bid to boost shipments of the steelmaking raw material from Goa.

The new duty structure will be applicable from June 1, Jaitley said.

Referring to the controversial new ITR form, he said an "extremely simplified" income tax return form will soon be brought.

"I am having the entire matter reviewed and very soon you will hear an extremely simplified procedure coming for us," he said. "Recently, a controversy did come up. There is an old income tax form of 12 pages which was made thirteen-and-half pages. I was out of the country when this was done, I had it stopped."

Buying peace with RBI, Jaitley dropped plans for the time being to strip the central bank of powers to regulate government bonds and give it to an independent agency.

Jaitley sought the cooperation of the opposition for reforms measures like Land Acquisition Bill saying the country needs to take advantage of the global situation to push growth.

"If we can put our house in order and put an end to political obstructionism, if states can come together, that will add to national growth rate," he said.

Stating that MAT on FIIs has been done away with from April 1, 2015, the Finance Minister said the issue regarding levy of the tax in past cases was now pending in Supreme Court.

"Yesterday, the matter was mentioned. The Supreme Court has said they will fix up after the summer vacation some date of hearing and that is not an issue I have announced today," he said.

With a view to provide a level playing field to domestic defence manufacturers in private sector viz-a-viz public sector, he withdrew the excise duty exemption available to defence PSUs and ordinance factory boards.

The changes will become effective from June 1, 2015.

The new ITR had been criticised by the industry and MPs as they felt it impinged on the individual's privacy by seeking details of all bank accounts and foreign travel.

As it stands, the new ITR forms, including the ITR-1 and ITR-2, require an assessee to furnish the number of bank accounts held by the individual "at any time (including opened/closed) during the previous year" with the last balance in the account on March 31 of the just-concluded fiscal.

The assessee will also have to furnish the name of the bank, account numbers, their address, IFSC code and any possible joint account holder.

Indian Express reports:The CCEA said if the developers opt to do the DST, then the only 50 per cent of the recovery of the cost of the test that runs into millions of dollars would be allowed, subject to a cap of $15 million. Of course, the two firms, which have six discoveries each stuck over the dispute with DGH, can relinquish these discoveries, mostly located in the Krishna-Godavari (KG) Basin. "If the contractor does not opt for any one of these options suggested above within 60 days of the CCEA approval, then the area encompassing these discoveries shall automatically be relinquished," the government said.

This will "settle the long-pending issue with regard to 12 discoveries in five blocks pertaining to ONGC and RIL but will also establish a clear policy for the future", the government said. The policy relaxation will also bring transparency and uniformity in decision-making, obviating the current case-by-case approach, it added.

On December 18, 2014, this paper reported that the Cabinet would take a call on policy on test requirements for oil and gas finds. The DGH had turned down three out of 14 discoveries submitted by ONGC in its KG Basin blocks — KG-DWN-98/2 and G4 — because the PSU explorer did not conduct the DST. In 2010, RIL too faced a problem when its three gas discoveries (D29, D30 and D31) in its KG-D6 block were not given the go-ahead by the DGH on the grounds of the firm not doing the DST.

Posted by Palash Biswas at 9:12 AM No comments: Links to this post

Posted by Palash Biswas at 5:49 AM No comments: Links to this post

Posted by Palash Biswas at 5:42 AM No comments: Links to this post 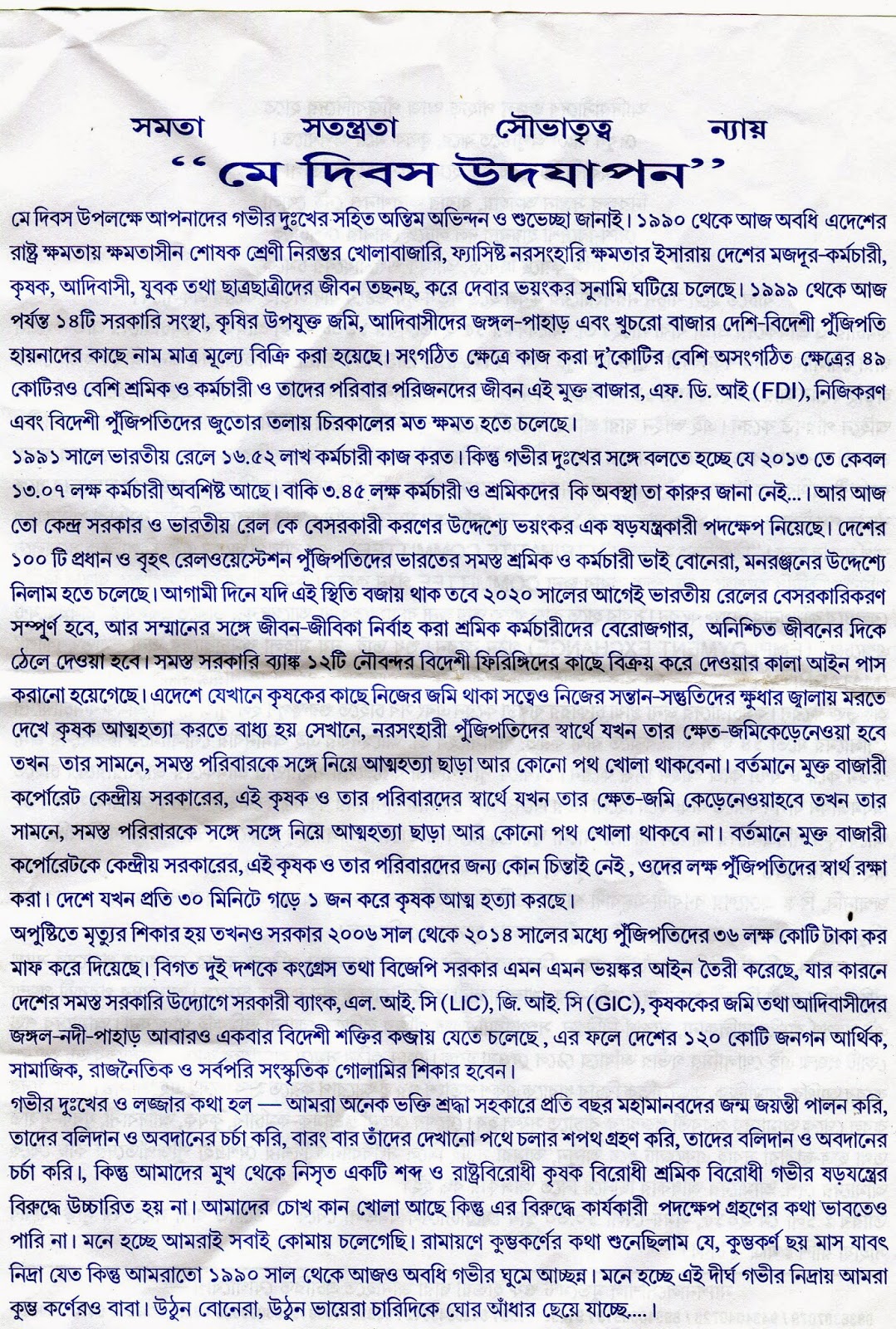 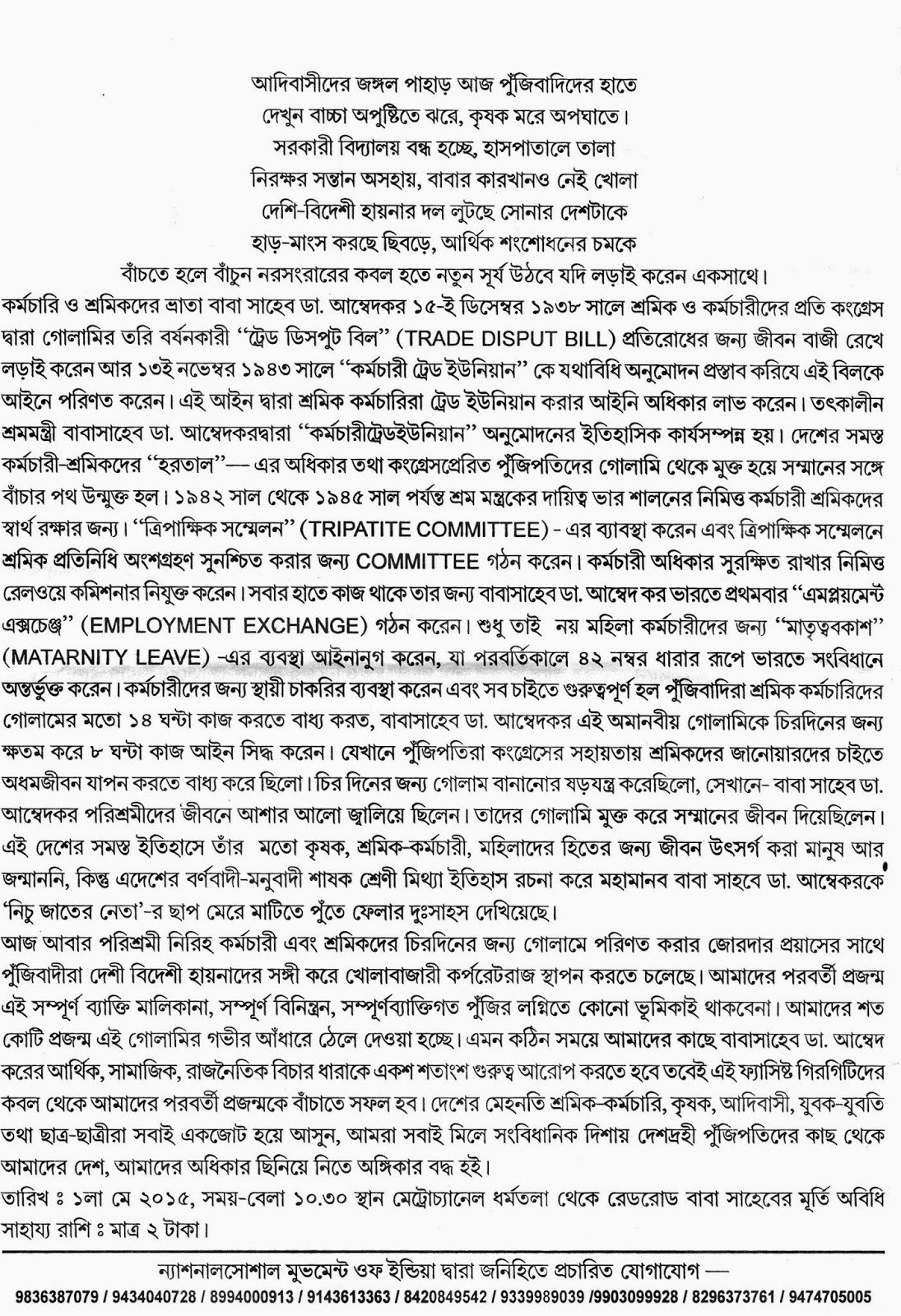 A Smart Boost for D-St

Investors perturbed over falling Sensex and Nifty may get some solace by focussing on another number likely to be of even greater interest in the coming months and years. This is the combined market cap of cos in cement, construction, consumer electronics, housing finance & cement. At `8.64 lakh crore, the combined value of these cos is about ten times the combined net profit of the Nifty for the year ended March 2015. And the reason why this is interesting should be obvious from the decision taken by the cabinet on Wednesday to clear a massive project to build smart cities.Analysts and fund managers believe that spending boost by govts & local bodies will benefit cos in these six sectors leading, in turn, to higher sales and earnings. Valuations of some of these stocks have become cheap in the recent ongoing stock market slide. Rajesh Mascarenhas brings you some stocks identified by brokerages as among the major beneficiaries of the smart cities programme. 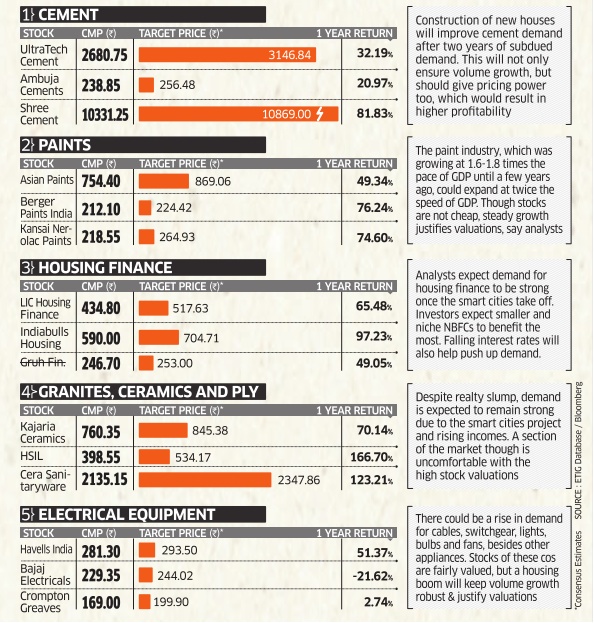 Posted by Palash Biswas at 12:15 AM No comments: Links to this post

Posted by Palash Biswas at 12:10 AM No comments: Links to this post

Posted by Palash Biswas at 12:44 PM No comments: Links to this post

Posted by Palash Biswas at 12:28 PM No comments: Links to this post