"No More Racism~!""Not My President!" America chants! How many people did see Rs 1000 or Rs 10000 notes in 1978 which were withdrawn without any consequence?Was there any cash crisis? Scrapped notes being exchanged in Delhi,Banaras and every part of the nation with cut money!Ins business hubs money is transferred to other accounts to make it white.Now the scrapped notes have to be exchanged in subordinate accounts! But with ATM money in 500 and 1000 notes,the masses suffer from unprecedented cash crunch which has no dented the HAVES at all! Palash Biswas

How many people did see Rs 1000 or Rs 10000 notes in 1978 which were withdrawn without any consequence?Was there any cash crisis?

Scrapped notes being exchanged in Delhi,Banaras and every part of the nation with cut money!Ins business hubs money is transferred to other accounts to make it white.Now the scrapped notes have to be exchanged in subordinate accounts!

But with ATM money in 500 and 1000 notes,the masses suffer from unprecedented cash crunch which has no dented the HAVES at all! Hundreds of protestors rallying against Donald Trump gather outside of Trump Tower in New York on Wednesday evening.

Would we learn some thing to help the helpless Indian people and stop to target them for their political religious faith as we have ourselves NO POLITICAL or Economical Vision at all and ideologies,Utopian theories without grass root level committed activism would only help them grow like blood seeds mythical.

See the currency clean up  magic to work in the national capital itself!Vendors in Old Delhi area, have come to the rescue for the people and at the same time, earn some money. The vendors exchange the high value notes, keeping a margin, so that when they deposit the notes in the bank, they get some profit, The Indian Express reporter.

Who would pay for the exercise to help the hegemony to make black WHITE afresh as fake notes would also be exchanged without any filter ,I am afraid.

How many people did see Rs 1000 or Rs 10000 notes in 1978 which were withdrawn without any consequence?Was there any cash crisis?

Scrapped notes being exchanged in Delhi, Banaras and every part of the nation with cut money!Ins business hubs money is transferred to other accounts to make it white.Now the scrapped notes have to be exchanged in subordinate accounts!

But with ATM money in 500 and 1000 notes,the masses suffer from unprecedented cash crunch which has no dented the HAVES at all!

The vendors, who have started this new business, generally work near Old Delhi, exchanging old, torn and damaged notes for a small some of money.

Ha!Prime Minister Narendra Modi's announcement on Tuesday about the scrapping of high denomination currency, has given a business idea to a few vendors. The move by the government was in a bid to curb black money as the high value notes are the basis of any form of corruption and illicit deals related to unaccounted money. But undoubtedly, this has caused a lot of hassle for many, even as a deadline has been set on December 30 to exchange the notes at the bank.

American people had no alternative to Donald Trump against the war economy represented by Madam Hillary and they opted for ultra nationalism as racists whites stood behind him including majority women.

Trump played his cards of blind nationalism with stunning strategic marketing and Hillary had no chance at all as Super Power America did not address the day to day problems of the masses.

It was dream unlimited reshaped from Obama mode which made history and proved Money Power is the ultimate truth and so called American Democracy reduced to a Trump Card exposed the myth of democracy,the democracy run by dead numbers naked.

It is just helplessness spilling the streets as we witness the tragedy enacted in Jantar Mantar every day without hearing and never witness the plight of the persecuted masses in every corner of the Nation!

In India, I am sorry that almost every one is attacking the supporters of Modi who are also the citizens of India and they support Modi just because the people have no alternative.We just behave like the Americans who defeated in th e elections have come out on streets to protest Trump.

What should be the alternative?

Modi phenomenon is nothing different from Trump Success.

Indian Politics have nothing to do with the day to day problems of masses.No political leader or activists dares to work on grass root level and everyone is engaged to use the democracy as ATM,Ideology as ATM,Political status as ATM irrespective of colour and lost credit.

The Left and Secular politics uprooted could not represent the masses and divided in every sense they attack the Modi Bhaktas only to help Modi because without any solid alternative and sound vision,these reactions against Modi Act would enhance the Modi Card.

With Trump Card,this governance of Fascism is going to be full of killing instinct and no one would be spared unless rock solid resistance made possible.

I is reported right from America!

Protesters took to the streets in cities across the United States, angered by the surprise election of Donald Trump. Demonstrations began shortly after president-elect Trump claimed victory in the early hours of Wednesday. On Wednesday night and into Thursday morning, they spread to several major cities.

A number of the demonstrations were centered around Trump-owned properties. Crowds gathered in New York City's Union Square and marched to the building where Trump lives. The crowds stopped traffic in Times Square, where protesters held up signs that said "No More Racism." NPR's Sarah McCammon, who is in New York, said many chanted "Not My President," which also has become a social media hashtag. Anti-Trump protesters gather in a park on Wednesday as New Yorkers react to the election.

Trump-owned properties also were targeted in Chicago and Washington, D.C. Police have set up barricades to keep crowds away.

"I wasn't politically active up until this point, and I really regret that," Case said. "So I just feel like now I've got to do something, even if that's just show the rest of the world that there are Americans who aren't OK with this." An anti-Trump rally is held on Wednesday in Seattle, Washington.

In Seattle, crowds gathered downtown, carrying signs that said "Fight Racism" and "Not My President." One of the speakers called on protesters to "stand together and fight like hell."

In Los Angeles on Wednesday night, thousands of protesters took to the streets, with some shutting down traffic on the 101 Freeway as they chanted "Not my president" and "Respect all women," the Los Angeles Times reports. Demonstrators gather to protest a day after President-elect Donald Trump's victory, at a rally outside Los Angeles City Hall on Wednesday. Protesters burned a giant orange-haired head of Donald Trump in effigy, lit fires ins the streets and blocked traffic lanes late into the night.

An effigy of Trump was burned at that protest, The Associated Press reports:

"Flames lit up the night sky in California cities Wednesday as thousands of protesters burned a giant papier-mache Trump head in Los Angeles ... Los Angeles demonstrators also beat a Trump piñata and sprayed the Los Angeles Times building and news vans with anti-Trump profanity. One protester outside LA City Hall read a sign that simply said 'this is very bad.' " Protestors burn an American flag outside of Trump Tower in New York City on Wednesday.

The protests largely have been peaceful. In Oakland, protesters set garbage fires, CBS reports, while in Portland police detained at least one man after protesters said he assaulted someone, according to KGW.com. A protester wearing an American flag faces police during an anti-Trump protest in Oakland, California on Wednesday. Thousands of protesters rallied across the United States expressing shock and anger over Donald Trump's election, vowing to oppose divisive views they say helped the Republican billionaire win the presidency.

Five people were shot and injured near a protest in Seattle, but police say the shooting and the protest were unrelated, Kate Walters of member station KUOW reports.

Dozens of people were arrested on Wednesday night, including at least 13 in Los Angeles and 15 in New York, according to media reports. A woman argues with NYPD officers as she takes part in a protest against President-elect Donald Trump in New York City tonight.

In his post-election victory speech, Trump said that he would be the president for all Americans, and that it was "time to come together as one united people."

"I pledge to every citizen of our land that I will be president for all Americans. And this is so important to me. For those who have chosen not to support me in the past, of which there were a few people, I'm reaching out to you for your guidance and your help so we can work together and unify our great country."

But many are not convinced. Trump's threats to deport illegal immigrants and ban all Muslims from entering the country has many worried they will become targets. Many NPR readers and listeners fear that race relations will deteriorate, despite Trump's words. Protestors shout slogans from a lamppost during in a demonstration on 5th Avenue across from Trump Tower on Wednesday, after Donald Trump was elected as the next president of the U.S.

At a protest in Miami, Cindy Wiesner, who helps undocumented workers, told NPR's Greg Allen that many of them were scared. 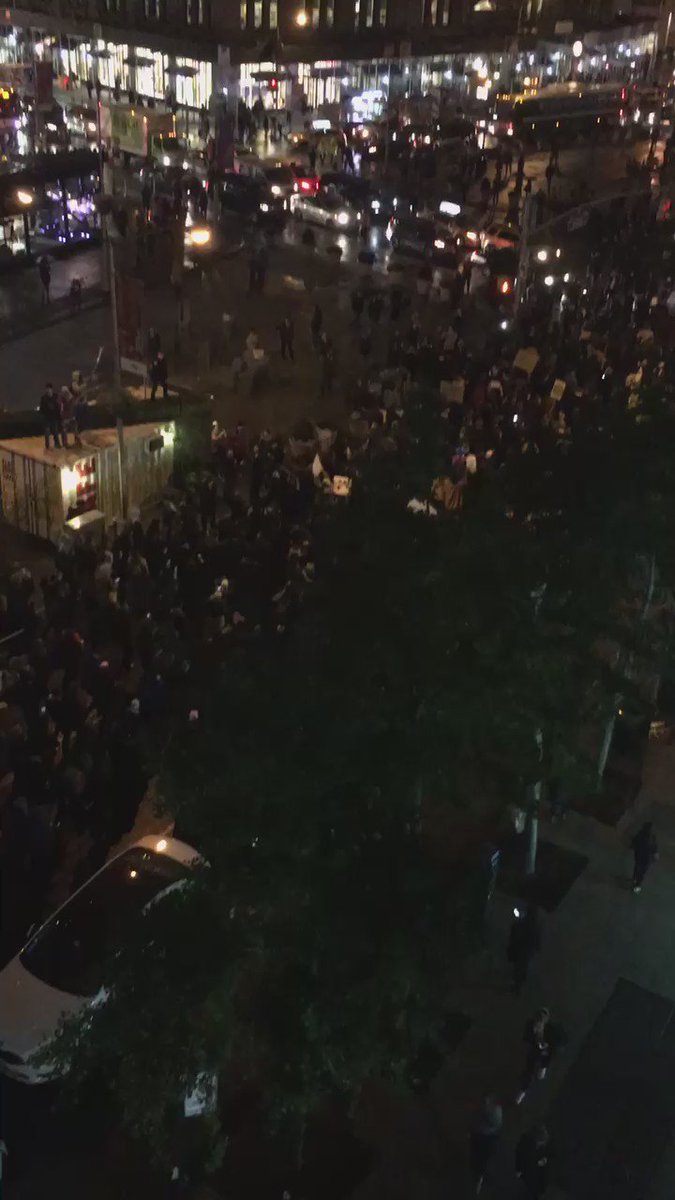 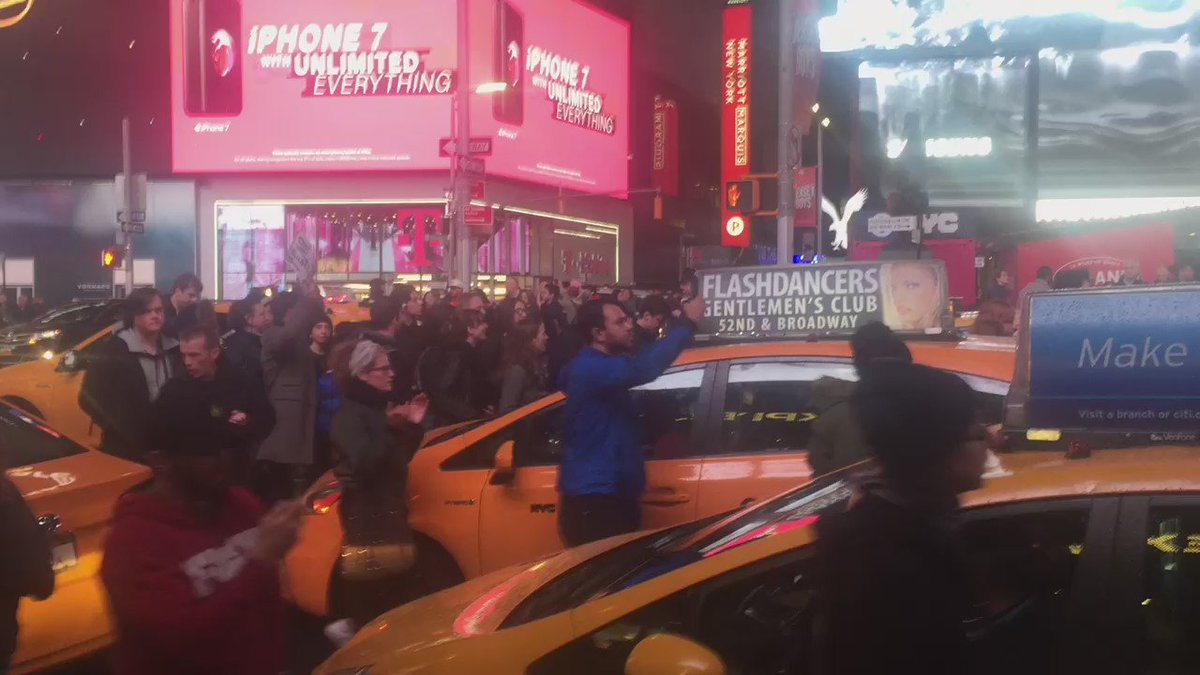 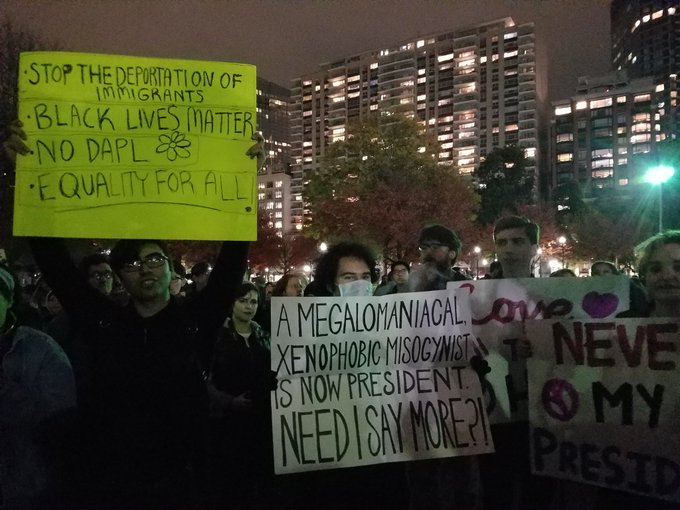 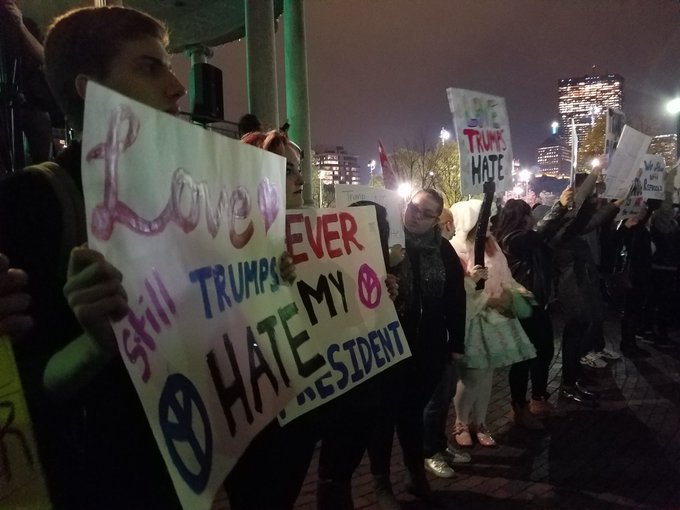 Protesters in Boston say they fear Trump will roll back rights & protections for women, minorities, immigrants and the LGBT community. 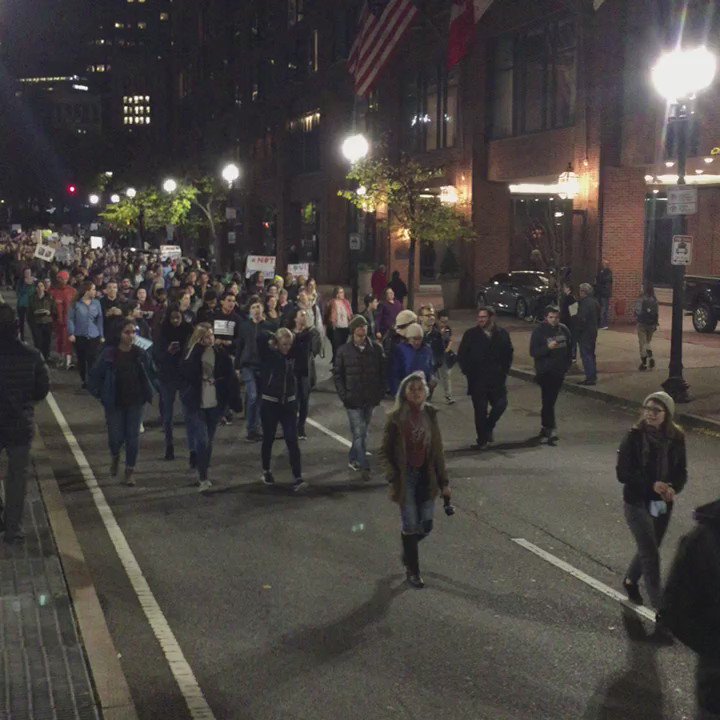 The crowds seem to be coming in waves. Al peaceful, chants, chatter. Almost at Copley, but others already there 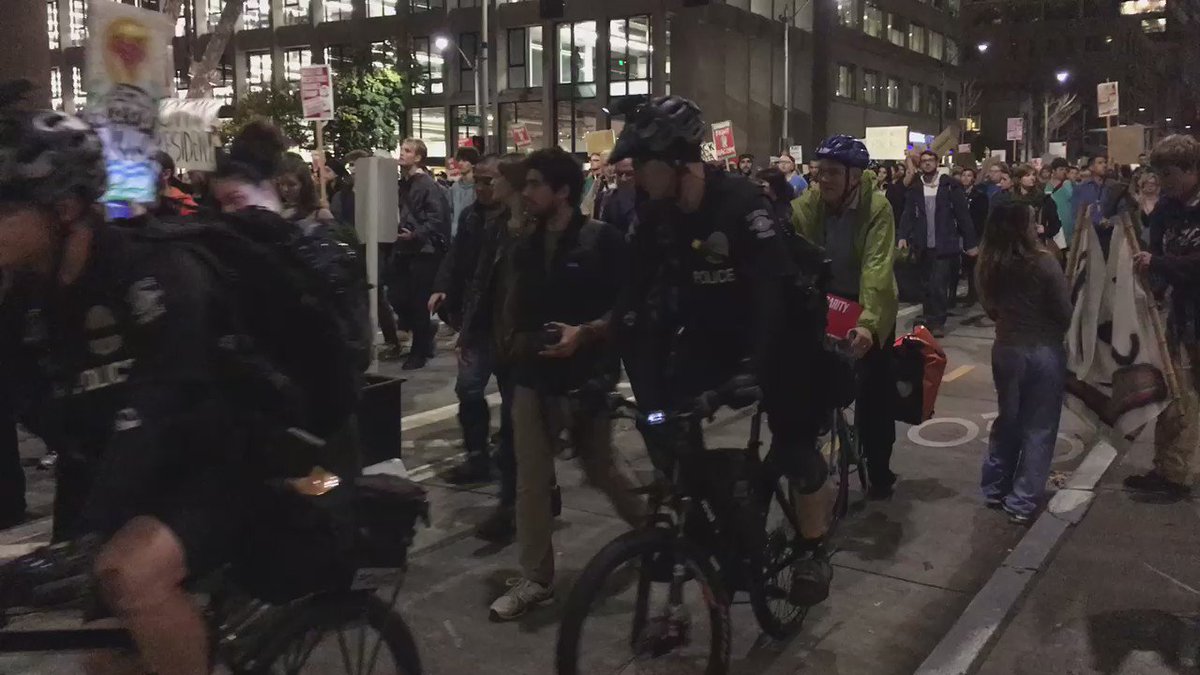 Calls of #dumptrump as #notmypresident protest passes Laguna in SF. Onlookers gawking at size of crowd on Market Street. 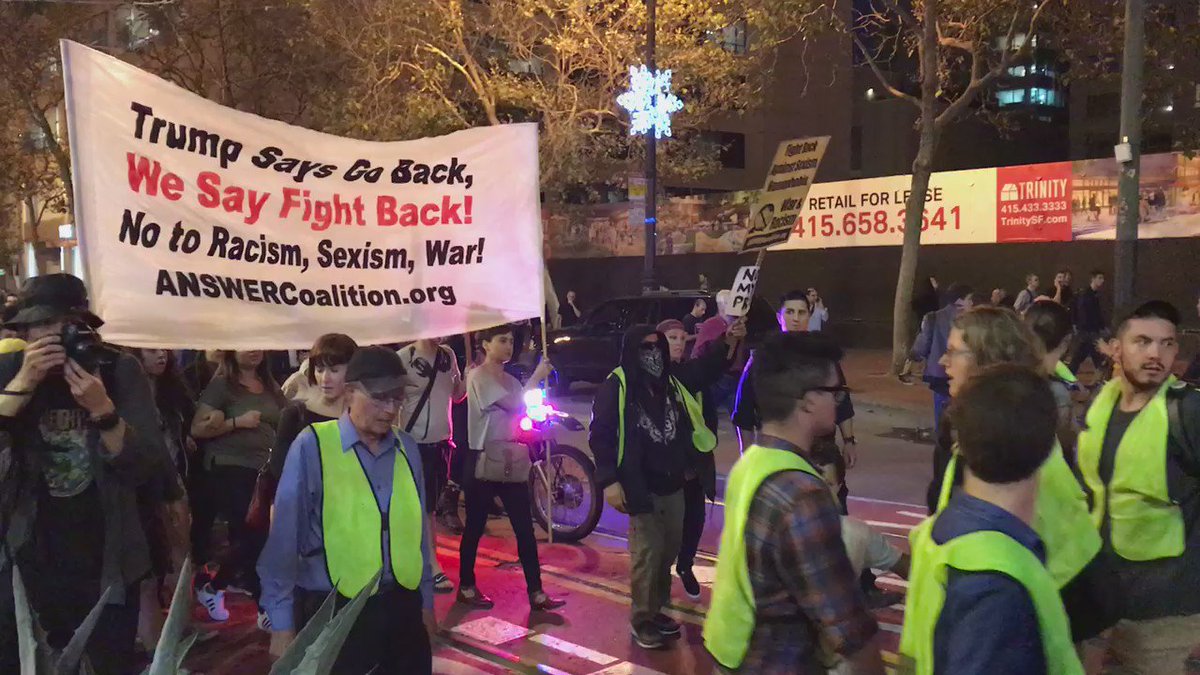 --
Pl see my blogs;
http://ambedkaractions.blogspot.in/
http://palashscape.blogspot.in/
Feel free -- and I request you -- to forward this newsletter to your lists and friends!
Posted by Palash Biswas at 6:08 AM