Kanhaia back,granted Bail,Rulers exposed Naked No University might be smashed,let them save their institution of Genocide! Manusmriti speaks the scripted language. Manusmriti might not create script. Only universities empower the students to create the script. JNU students created and scripted history.It is just the beginning. They wanted to delete Rohith Vemula and JNU students ensured that Rohith Vemula should live. They cried on Rajpath:Down Down Manusmirti! They cried on Rajpath:Down Down Brahmanvad! They cried on Rajpath:Down Down Manuvad! They made Gandhi walk invoking Nathuram Godse! They again made DR BR Ambedkar walk into life with his agenda of annihilation of caste. It is all the way MISSION Baba saheb which is associated with slogan:Jai Bheem Comrade! Fascist regime in India might not sustain in India,ensured! Palash Biswas

No University might be smashed,let them save their institution of Genocide! 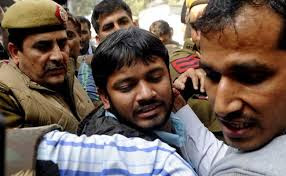 Maasive 7.9 magnitude earthquake in Indonesia today might have been felt in the Headquarter of the governance of Fascism in Nagpur.

It is just the beginning and they would feel the tremors as our Children are determined to defend India and Indian leader as their leaders is back in JNU.

It is all over#Stand with JUNU!

On a day when JNU students Umar Khalid and Anirban Bhattacharya, arrested on charges of sedition, were sent to 14-days' judicial custody, their teachers came out in their support and said they "stand by them at this critical hour".

Mind you,The Delhi Police accused 19 JNU students of displaying anti-national slogans, out of which 16 are alumni of the university, some of which are pursuing higher education in institutions abroad!

In an e-mail to Vice-Chancellor M. Jagadesh Kumar, Mr. Chomsky has questioned the decision to allow police on the campus. "Many of us remain very concerned about the crisis in JNU, which was apparently created and precipitated by the government and university administration with no credible evidence of any seditious activities on campus. Why did you allow the police on campus when it is clear that this was not legally required?" the e-mail sent on Sunday read.

You may guess the global impact of this fascist agenda of Hindutva with a single instance!

Tennis legend Martina Navratilova has said her recent tweet on the Jawaharlal Nehru University sedition row that whipped up a storm of protest was to convey her view that violence and bullying solved nothing, and not to pass judgement on India.

The 18-time singles Grand Slam champion has been trolled on Twitter following a February 22 post linking two New York Times articles critical of the Indian government and talking about the march in the Capital by JNU students to protest the arrest of their union leader Kanhaiya Kumar, who has been booked for sedition.

The court gave relief to Kanhaiya by asking him to furnish a personal bond of Rs 10,000 and a surety of like amount. The high court made it clear that a JNU faculty member has to stand as surety for Kanhaiya.

Justice Pratibha Rani had on Monday reserved the order after over three hours of hearing on the bail plea of Kanhaiya, accused of raising anti-India slogans inside JNU campus during an event organised on February 9.

During the hearing, while Kanhaiya's counsel had argued that the student leader had never raised any slogans against the nation, Delhi Police had maintained that there was evidence that he and others were shouting anti-India slogans and were holding Afzal Guru's posters.

The police had claimed that Kanhaiya was "not cooperating" in the probe and even came out with "contradictory" statements in joint interrogation by Intelligence Bureau (IB) and Delhi Police.

The defence lawyers, including senior advocate Kapil Sibal, had countered the allegations saying there were "some outsiders with covered faces who raised anti-India slogans and Kanhaiya was seen in CCTV footage asking them for their identity cards."

The bench had also asked tough questions to the police on slapping sedition charge on the accused and asked it to show evidence against him of his "active role" in raising anti-India slogans.

Giving him the bail today, the high court listed out certain conditions, including that he will have to cooperate in the investigation in the case and present himself before the investigators as and when required.

Kanhaiya had also distanced himself from Umar Khalid and Anirban Bhattacharya, the two other accused arrested in the case.

Earlier this week, the case was transferred to the Special Cell, Delhi Police's counter-terrorism unit, with Police Commissioner BS Bassi, who retired on Monday, saying the matter needed "focussed investigation".

The ruler could not act against Jadavpur University.

Bardhaman university students were thrashed by fascist goons who have ben arrested an bailed out after studnets` movement.

Pak Army tried to demolish Dhaka University and killed students and teachers there way back in 1970 and it created independent Bangladesh.

Universities are not religious places or palaces of the rulers.

Universities are the places to seek knowledge.

Universities make the past present and future of a nation.

Universities is all about debates,interactions and democrat voices.

Revolt against the hegemony is a must to save the nation.

JNU revolted against the system which is rotten down to bottom.Our students and teachers sustained the cry for equality and justice.

The sedition case stands no where as the rulers never know the exact meaning of Sedition as Delhi High court confirmed.

Words in the videos that are seen to incite violence have been spliced, says the forensic lab report.

The investigation also shows that the slogan "Pakistan Zindabad" was not in any of the videos.

Meanwhile,at least three video clips of the alleged 'anti-India' sloganeering in Jawaharlal Nehru University (JNU) have been found to be 'doctored' by a forensic examination, a media report said today.

The video samples were sent by the Delhi government to Truth Lab in Hyderabad.

On February 13, the Aam Aadmi Party (AAP) government in Delhi had ordered the District Magistrate (New Delhi) to file a factual report about the incident, following conflicting claims of different parties shouting allegedly anti-national slogans on the JNU campus.

Indian Express, quoting its sources, said that three video clips that have been found doctored were found with 'serious' tampering and 'very special words' were inserted in the video clips.

The AAP had earlier questioned police action in the case and claimed, "The facts that are coming to light about this entire incident point towards a deep suspicion about the conspiratorial role played by the ABVP."

According to sources, it said, the various video clips suggested that nowhere in the videos of February 9, when Kanhaiya Kumar, currently in judicial custody facing charges of 'sedition', was seen raising any 'anti-national' slogans.

--
Pl see my blogs;
http://ambedkaractions.blogspot.in/
http://palashscape.blogspot.in/
Feel free -- and I request you -- to forward this newsletter to your lists and friends!
Posted by Palash Biswas at 7:25 AM