Over 80% turnout recorded in West Bengal assembly election 2016 which was held in 6phases (7round).

This electoral process completed under extraordinary supervision of Election Commission which acted against the ruling party AITC (TMC) due toallegedly directed by BJP & Left.

In spite of opposition directed (??) Election Commission and Central force have tried their best to prevent TMC from victory.

But people of Bengal are choosing Mamata Banerjee and her party as victorious. Majority of Media in Bengal had vigorously campaigned against TMC.

Against all odds people of Bengal are with their beloved Didi Mamata Banerjee.

Didi (Mamata Banerjee) wave in West Bengal is still in full swing. Anti-propaganda by media (ABP-Ananda & 24-Ghanta) and opportunist alliance of CPIM-Congress has failed to stop this wave.

As per Prediction, based on EXIT-POLL/Opinion-Poll SURVEY carried out by this "Maa Mati Manush" (Ma Mati Manush) Blog in all 294 assembly constituencies ofWest Bengal we found that:

Here is the district wiseprediction: 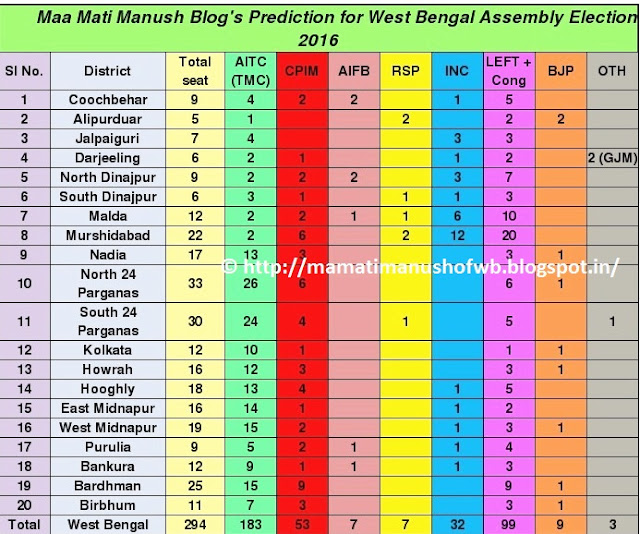 Area wise survey is showing AITC (TMC) is getting 49% vote in rural area whereas in urban area they are getting only around 42% vote.

As far as minority vote concerns, it's significant that TMC is getting over 64% minority vote share in Kolkata and adjoining area.

Hence it clear that, "Trinamool Congress is coming back in power due to minority vote" is just a myth.

Our team carried out survey in all 294 constituencies of Bengal. Voters were from all sections of society.

With help and active participation of various other agencies, well-wishers and political pandits this vast survey was possible.

For there priceless work THANKS will just be a small word.

Now please look at the summary of the result of our seat projection and vote share.

Only difference is BJP's seat got reduced and Left gained from that.

Now if Mamata Banerjee and her party Trinamool Congress finally achieve this overwhelming victory it will be a historical win for her as this time it was against all odds.

Viewers may read following two articles to know how opportunistic and immoral politics was played in Bengal during this election.

Please see other posts in this blog page by clicking "Home" or from "Popular Posts" / "Archives" sections, and if any remarks please post.

--
Pl see my blogs;
http://ambedkaractions.blogspot.in/
http://palashscape.blogspot.in/
Feel free -- and I request you -- to forward this newsletter to your lists and friends!
Posted by Palash Biswas at 11:05 PM