US "Withdrawal" In Iraq Paves Way for US-Israeli Strike on Iran
Global elite maneuver into position for final leg of Middle East campaign, one year into "Arab Spring," one step closer to global hegemony. Tony CartalucciInfowars.comDecember 18, 2011 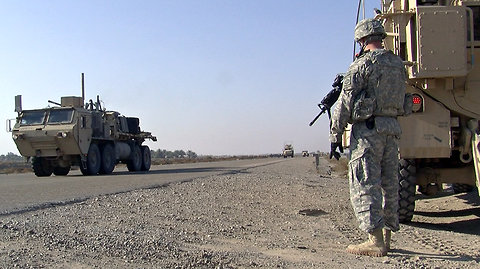 Nearly every option described within the Fortune 500-funded Brookings Institution 2009 "Which Path to Persia?" report in regards to US-initiated regime change in Iran has been carried out to the letter. From proposals to fund and arm terrorist organizations like the Mujahedin-e Khalq (MEK), to fomenting foreign-backed "color revolutions" in the streets of Tehran, to carrying out covert US-Israeli military operations within Iran itself, it is clear that the Brookings Institution either was writing the playbook on conquering Iran or was reading from it when compiling "Which Path to Persia?" The only remaining options left are airstrikes and invasion. The report extensively details using Israel as a US-proxy in attacking Iran in an attempt to cripple its nuclear program as well as destroy much of its security apparatus while maintaining "plausible deniability" for the attack's US architects. It is also hoped that the airstrikes incur a sufficient Iranian retaliation (or at least the opportunity to stage a false flag operation in Iran's name) to allow Israel and the United States to carry out a more extensive follow-up military operation against the Islamic Republic. The primary hurdle described throughout the report's examination of using a "unilateral" Israeli strike, however, was a US-occupied Iraq and the complications an Israeli airstrike would cause passing through the nation's airspace on its way to bombing Iran. However with the US' recentrushed "exit" from Iraq, this complication is no longer an issue.

"An Israeli air campaign against Iran would have a number of very important differences from an American campaign. First, the Israeli Air Force (IAF) has the problem of overflight transit from Israel to Iran. Israel has no aircraft carriers, so its planes must take off from Israeli air bases. It also does not possess long-range bombers like the B-1 or B-2, or huge fleets of refueling tankers, all of which means that unlike the United States, Israel cannot avoid flying through someone's air space. The most direct route from Israel to Iran's Natanz facility is roughly 1,750 kilometers across Jordan and Iraq. As the occupying power in Iraq, the United States is responsible for defending Iraqi airspace. " Which Path to Persia?-page 105 (.pdf) "From the American perspective, this negates the whole point of the option—distancing the United States from culpability—and it could jeopardize American efforts in Iraq, thus making it a possible nonstarter for Washington. Finally, Israeli violation of Jordanian airspace would likely create political problems for King Abdullah of Jordan, one of America's (and Israel's) closest Arab friends in the region. Thus it is exceedingly unlikely that the United States would allow Israel to overfly Iraq, and because of the problems it would create for Washington and Amman, it is unlikely that Israel would try to fly over Jordan." Which Path to Perisa?-page 106 (.pdf)

"An Israeli attack on Iran would directly affect key American strategic interests. If Israel were to overfly iraq, both the Iranians and the vast majority of people around the world would see the strike as abetted, if not authorized, by the United States. Even if Israel were to use another route, many Iranians would still see the attack as American supported or even American orchestrated. After all, the aircraft in any strike would be American produced, supplied, and funded F-15s and F-16s, and much of the ordnance would be American made. In fact, $3 billion dollars in U.S. assistance annually sustains the IDF's conventional superiority in the region."Which Path to Persia-page 106 (.pdf)

The US withdrawal from Iraq is being done in tandem with NATO operations to destabilize Syria and in turn disrupt Hezbollah's capacity to retaliate against Israel in the event of a strike on Iran – a concern also duly noted within the Brookings report.

"…the Israelis may want to hold off until they have a peace deal with Syria in hand (assuming that Jerusalem believes that one is within reach), which would help them mitigate blowback from Hizballah and potentially Hamas. Consequently, they might want Washington to push hard in mediating between Jerusalem and Damascus." -page 109 (.pdf)

It is quite clear that eliminating Syria entirely as an obstacle has been instead attempted, and with NATO standing by and a continuous influx of foreign fighters being armed and sent across the border to mire Syrian forces in asymmetrical warfare, any coordinated retaliation against Israel by Syria, Iran, and Hezbollah has been at the very least blunted significantly. The significance of Syria's ability to weather this US-backed destabilization and maintain a coherent deterrence against Anglo-American-Israeli forces in the region has been noted by Russia who has thus far blocked attempts to justify further, more overt intervention by NATO in Syria. However, Syria will be taken down, as will Iran, at any cost just as was done with Libya, and only a tactical defeat of Wall Street and London's military forces in the process will prevent this from happening. Attempts to soften Russia's grip on Syria was recently made as US-funded NGOs began attempting to sow "Arab Spring-style" disarray in the streets of Moscow. While some consider it a sign of madness on behalf of Wall Street and London - it is in reality part of a highly orchestrated global campaign, being executed in sequence, and thus far highly successful in achieving its goals. Throughout each stage, feigned weakness has been exhibited only to result in victory and it would be great folly to underestimate the endurance or will of the West at this juncture. The Bottom LineAlready, one year into the US-engineered "Arab Spring," a US-funded "activist leader" has been made president of Tunisia, a British Petroleum (BP), Shell, and Total-funded Petroleum Institute representative made PM of Libya, and other Western puppets are now poised to seize power in Egypt. Wall Street and London have also recently announced via the US State Department that an official campaign of frustrating, encircling, and containing China's ambitions throughout Asia will be pursued under the title of "America's Pacific Century." Already Chinese projects in Myanmar have been canceled while Wall Street stooge Thaksin Shinawatra of Thailand has been maneuvering politically to return to power at an already terrible cost to the Thai people. Now more than ever, "we the people" must steel ourselves against this immense corporate-fascist empire as it sprawls death, destruction, and domination, militarily and economically, across the planet. We must, our very survival depends on it, boycott and replace entirely the corporate-financier interests that drive this dark, expansive agenda. It has been literally spawned of our apathy, complicity, and ignorance, fueled by us – the very source of corporate fascism's power – and it must be our activism, resistance, and intellect that brings it to an end. As far fetched as it may sound, every Pepsi we swig, every day we decide to drink beer and tune into our corporate-sponsored bread and circus, be it the modern day chariot races of NASCAR or the gladiatorial contests of the NFL, we bring inescapable eternal servitude to a corporate-fascist scientific dictatorship one step closer. It is now "do or die" – unlike in the past, mankind now possesses the technology to render the vast majority of the population intellectually inferior through mass medication, food poisoning, GMO crops that rot our bodies and minds from the inside-out, and the martial means of eliminating vast swaths of the population permanently. Not only is this a possibility, it is a reality the global elite have conspired over at great length through texts like Ecoscience penned by current White House science adviser John Holdren and former White House science adviser Paul Ehrlich who openly talk about mass, involuntary medication to forcibly sterilize the population, reduce our numbers and confine us within what they literally call a "planetary regime." The End Game approaches.Tony Cartalucci is the writer and editor at Land Destroyer Report

Brookings' "Which Path to Persia?"