# $ SHTTER DOWN RIGHT TO KNOWLEDGE FOR MANUSMIRTI RSS indulged in Direct Action in Kolkata yet again,Jadavpur University attacked! In Dhaka,the Pak Army destroyed the Dhaka University and killed students and professors, writers,jurnos,intellectuals one by one but they lost East Pakistan!Please read History once again! Palash Biswas

In Dhaka,the Pak Army destroyed the Dhaka University and killed students and professors, writers,jurnos,intellectuals one by one but they lost East Pakistan!Please read History once again! 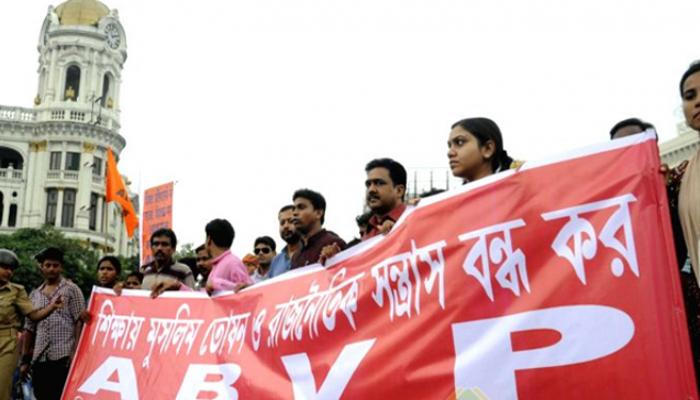 Universities have been reduced to foreign territories to be destroyed.

The generation XYZ screaming dissent have been branded as Pakistani Army who have to be killed to sustain Fascist Hindutva regime!

Those who want to know the history of Partition,may keep their eyes wide open as the HOLOCAUST being enacted again!

Every University seems to ave become the snowy peak of KARGIL to be captured by the Bajrangi Brigade and the Governance of Fascism makes in KHAP PANCHAYAT sacrifices on the alter of Hindutva,the nationalism reduced.

Every other one is branded Anti National!What Nation do we have?

Please study the history of sedition Act and then react!

The national flag has been reduced in Hindutva Atom Bomb to explode the entire democrat set up,social fabrics,justice,law and order and muscle power money power to kill humanity!

Do we suffer from some biological disorder beside personality disorder?

Have we lost our spines?

Do our legs fail to erect ourselves?

Is it a nation of the citizens deaf,dumb and blind?

Who dares to lodge any dissent has to be killed all on the name of patriotism.

The Nation saw the attacks on Kanhaia in the court room LIVE,journos were not spared by rowdy lawyers and so called legislators and Supreme court had to intervene,but Delhi Police registered FIR against unknown individuals whose faces are live round the clock!

Those who violet the constitution of India,those who indulge to kill the sovereignty and freedom of free Indian Citizens,those who subjected the Supreme Court to be ruled by mob violence and Khap Panchayat Fatwas,rules the streets,rule the Parliament,rule the court rooms!

Is it the Nation?

We knew.We posted timely warning on Hastakshep that RSS planned to kill Kanhaia day before the assault,but Delhi Police does not know anything.

Is the police reduced to robot controlled by Khap Panchayat!

Would justice be subjected to mob violence?

ABVP leaders and workers have revolted and they cry,Save JNU! 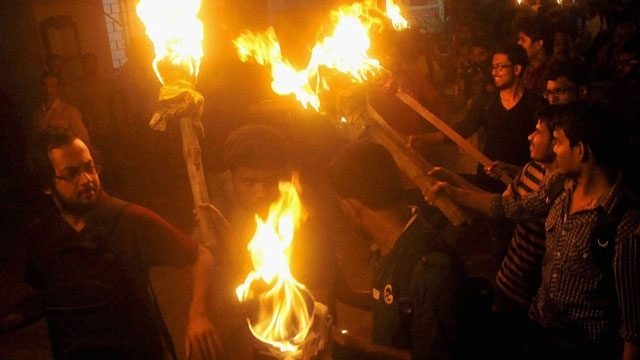 JNU Row: Jadavpur University VC says university has nothing to do with anti-national slogans

'Jadavpur University will not support any anti-national activity. I spoke to the student representatives and they have categorically stated that they had no role in the protest. Students have said that they do not endorse anti-national slogans. That rally was not officially convened by the students' union,' he said.

Jadavpur University Vice-Chancellor Suranjan Das on Wednesday clarified that the students of the university had no role in the protest which raised anti-national slogans, adding that it was certain fringe elements that were behind the incident. 'Jadavpur University will not support any anti-national activity. I spoke to the student representatives and they have categorically stated that they had no role in the protest. Students have said that they do not endorse anti-national slogans. That rally was not officially convened by the students' union,' he said.

'Certain fringe elements raised the slogans, we condemn it. Entire university can't be defamed. I will never govern the university with the police's help, it is an autonomous body. I have not yet received any letter. If we receive any letter we will pursue internal university mechanism to probe. The rally started from Jadavpur and then roamed around other streets. The students' union has categorically stated they have disassociated from particular fringe elements who raised slogans,' he added.

Das further stated that the Jadavpur University has a very historic background, adding that it freedom of speech and right to dissent is there.

Police also tried to identify and trace some "outsiders", part of the group that shouted the allegedly seditious slogans.

Neither the FIR nor the situation report prepared by the special branch of Delhi Police mentioned anybody's name for shouting anti-India slogans during the event.

The FIR and police report only referred to Kumar and Khalid as those who led the students' protest march.

MORE ON THE JNU ROW

Khalid, originally from Bihar, allegedly absconded after a sedition case was registered in the incident and Kumar was arrested. His mobile number too was switched off the same day. Scrutiny of Khalid's mobile number showed that it was used frequently between February 6 and February 9 and the calls were made and received outside Delhi.

A senior police officer said they were questioning Khalid's family members, relatives, friends and colleagues living in Delhi to find out his whereabouts. We are raiding areas in Delhi-NCR, Bihar and other states where Khalid could be hiding, the officer said.

Similar raids are being conducted in West Bengal, Kerala, Maharashtra, Uttar Pradesh and Jammu and Kashmir, in search for ten more students who were allegedly involved in shouting anti-India slogans.

The Delhi Police sought help from their counterparts in these states to trace the absconding students.

"Teams have raided several places in as many as five states in the past two days. The ten absconding students include at least five from the JNU while others are members of Left-supported organisations," a police official said. Police put their mobile phones under surveillance and airports across India were alerted about absconding students.

Earlier in the day, Delhi Police chief BS Bassi said, "People in huge numbers participated in it (the event), and we have already identified the ring leader. Now we are looking for all those who have been identified. Very soon, we will get hold of them."

#JNURow boils over: The resignation of 3 ABVP students must force the BJP to rethink its idea of India

The resignation of three Akhil Bharatiya Vidyarthi Parishad (ABVP) students coupled with their refusal to be the mouthpiece of the government must have hurt the BJP. When your children show you the mirror, reflect on questions about morality, ethics and nationalism, it is bound to prick the ego and hubris of the elders.

So calling them traitors, deriding them as anti-nationals, sympathisers of JNU jihadis and agents of Pakistan is a tempting and natural reaction.

But, the BJP and its nationalist bhakts would benefit immensely if they listen carefully to the three ABVP leaders who quit on Wednesday, citing difference of opinion with their organisation.

They are reminding the saffron parivar of the core values of India, the real meaning of nationalism. On Wednesday night, joint secretary of the JNU wing of the students' organisation, put up an open letter on his Facebook page announcing that he is quitting ABVP with two other leaders.

It would have been much better if a senior leader of the party or one of its spokespersons had reflected on recent events, given precedence to morality over politics, conscience over opportunistic jingoism and stated the obvious.

But, now that these conscientious students have spoken out, the BJP should reflect.

The party should ask itself whether thugs with the Tricolour in hand denigrate the nation or add to its pride with their street violence and cowardly attacks on unarmed students, journalists and the very foundation of democracy.

At the peak of the Ram Mandir agitation, the BJP was mocked by its critics for having 'Moonh mein Ram, bagal mein chhuri' (Ram on the lips, dagger in hand). It is now in danger of becoming a party of hooligans with 'Haath mein Tiranga,dimaag mein danga' (Tricolour in hand, riot on the mind).

It should reflect on how a party that once took pride in the Indian culture where a guru is considered bigger than Govind (that's Kabir), turned into a party that is busy denigrating teachers, labelling them 'anti-nationals' and threats to the nation.

MORE ON THE JNU ROW

How, while promising to fight against enemies of the nation, it started attacking the country's premiere institutions, its own people, students and Dalits; dispensing certificates of patriotism and nationalism and street justice.

As the ABVP leaders say in their resignation letter: "Anti-national slogans on 9 February in university campus were very unfortunate and heart breaking. Whosoever responsible for that act must be punished as per the law but the way NDA government is tackling the whole issue, the oppression of Professors, repeated lawyer attacks on Media and Kanhaiya Kumar in court premises is unjustifiable and we think there is a difference between interrogation and crushing ideology and branding entire left as Anti-national."

Meanwhile on Wednesday, Kailash Chaudhry, BJP legislator from Bayatu said, "The Congress thinks Rahul Gandhi is a prince, but he is a traitor. He should be shot."

The BJP must reflect, how, with its meticulous ambiguity on the culture of Nathuram Godse, it has turned a country that took pride in its legacy ofahimsa, into a nation of rampaging lynch mobs, where its leaders are raring to kill another Gandhi.

Finally, the ABVP leaders are telling the truth about the 9 February incident in the JNU campus. "Veiled persons in the event organised by former DSU persons shouted slogans 'Bharat tere tukade honge', of which there is concrete evidence in the videos, so we demand any person responsible for the slogans should be punished as per the law."

They are telling us that the event was not organised by Kanhaiya Kumar, that anti-slogans were not raised by him but people wearing masks.

BJP, this is the conscience of your young leaders talking.

Lawyers thrash Kanhaiya in court as police watched in silence

VIDEO: Delhi police releases an appeal by Kanhaiya to the public

REPLAY VIDEO
JNU row: Cops release video of Kanhaiya asking public for calm
--
Pl see my blogs;
http://ambedkaractions.blogspot.in/
http://palashscape.blogspot.in/
Feel free -- and I request you -- to forward this newsletter to your lists and friends!
Posted by Palash Biswas at 12:19 AM