Fwd: Inhuman torture by BSF upon a DALIT and subsequent threat

I want to draw your attention on yet another incident of brutal torture upon a person belongs to socio- economically marginalized section.  Mr. Sudarshan Mondal, a young migrating labour from Schedule Caste community was murderously attacked and tormented by the Border Security Force personnel.   In this case the BSF personnel used unauthorized and unconventional weapons; sickle to attack the victim. Our fact finding revealed that the person was trying to smuggle out few cattle.

I am deeply concern about the broadly accepted notion of the BSF and other actors about the use of unjustified force upon the 'might be' cross border smugglers. An unwritten sanction is there for such use, which is against any civilized law.

A comprehensive fact finding report is appended herewith for your easy reference.

In this regard I demand for:-

Mr. Sudarshan Mondal, son of Mr. Sitanath Mondal, aged about 35 years, a resident of village- Char Durgapur, Post Office- Harudanga, under Raninagar police station of Murshidabad district is a wage laborer, frequently migrating to different states for wage earning. Sudarshan belongs to schedule caste community.  He was out of his village from March 2011 to October 2011, he returned back to his native in last week of October 2011. On 3.11.11 at early morning he went to Char Nabipur with his companions with an intention to smuggle out few cattle. At about 5.00 am, while they were at an open field adjacent to Rajanagar- Ashramtala- Mahadeb Hat, the above mentioned BSF personnel noticed them. The BSF personnel started firing at the air and started chasing them. The victim and his associates tried to flee from the scene but were captured. Sudarshan lost his balance and fell down at the field. Then, the BSF personnel seized him and hit with a sickle on his head. Sudarshan wounded and profusely bled became unconscious. His wife; Ms. Sonali Mondal, Mr. Swapan Mondal and Mr. Kalu Mondal - both sons of Mr. Tarapada Mondal, Mr. Ashok Mondal; son of Mr. Upen Mondal and many others, who witnessed the incident took him to Godhanpara Primary Health Care Center by arranging a vehicle. The attending doctor at the said Health Center referred him to Bahrampur New General Hospital. He was advised for CT Scan of his head and it was done on 4.11.11 by his own cost. He was admitted there till 7.11.11 and after his discharge still required medical treatment.

The BSF personnel warned him not to lodge any complain and shattered Sudarshan opted for that, but after continuous counseling by our organization, he ultimately made a complain before the Superintendent of Police- Murshidabad on 18.05.2012.

Now, he is totally broken due to his ill health and financial crisis. He is in brink of devastation and not in a position to continue his treatment. 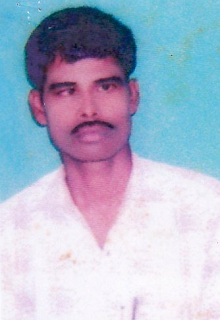 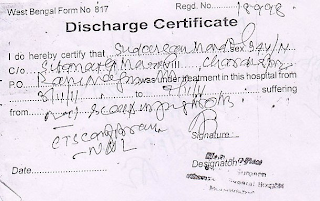 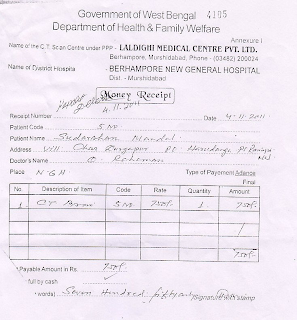 Posted by Palash Biswas at 6:48 AM