From Wikipedia, the free encyclopedia
Jump to: navigation, search

Rittik (Kumar) Ghôţok (help·info); 4 November 1925 – 6 February 1976)[5][6] was a Bengali Indian filmmaker and script writer. Along with prominent contemporary Bengali filmmakers Satyajit Ray and Mrinal Sen, his cinema is primarily remembered for its meticulous depiction of social reality. Although their roles were often adversarial, they were ardent admirers of each other's work, and in doing so, the three directors charted the independent trajectory of parallel cinema, as a counterpoint to the mainstream fare of Hindi cinema in India. Ghatak received quite a few awards in his career, including National Film Award's Rajat Kamal Award for Best Story in 1974 for his fim Jukti Takko Aar Gappo,[7] Best Director's Award from Bangladesh Cine Journalist's Association for Titash Ekti Nadir Naam. The Government of India honoured him with the Padma Shri for Arts in 1970.[8][9]

Ritwik Ghatak was born in Dhaka in East Bengal (now Bangladesh).[10] Ghatak's father Suresh Chandra Ghatak was a district magistrate and also a poet and playwright; his mother's name was Indubala Devi.[11] He and his twin sister Prateeti, were the youngest of nine children.[12] The other children were – Manish, Sudhish, Tapati, Sampreeti, Brototi, Ashish Chandra and Lokesh Chandra. He and his family moved to Calcutta (now Kolkata) in West Bengal just before millions of other refugees from East Bengal began to flood into the city, fleeing the catastrophic Bengal famine of 1943 and the partition of Bengal in 1947. Identification with this tide of refugees was to define his practice, providing an overriding metaphor for cultural dismemberment and exile that unified his subsequent creative work. The 1971 Bangladesh Liberation War, which led to more refugees fleeing to India, was to also have a similar impact on his work.

In 1948, Ghatak wrote his first play Kalo sayar (The Dark Lake), and participated in a revival of the landmark play Nabanna. In 1951, Ghatak joined the Indian People's Theatre Association ( IPTA ). He wrote, directed and acted in plays and translated Bertolt Brecht and Gogol into Bengali. In early 1970s, he wrote and directed his last play Jwala (The Burning).The music director was Darbar Bhaduri,who was called by Ghatak 'Dada' or 'Guru' from his childhood.Ghatak was inspired by Darbar Bhaduri a lot.In Rajshahi,Bangladeh—his homeland Ritwik lived beside Bhaduri's house. Almost all time he was with Darbar Bhaduri.Darbar Bhaduri was 'King maker' who kept himself away from outside world.But,Ghatak by pressure made Darbar Bhaduri the music director of 'Jwala',and the music was extraordinary.

Ghatak entered the film industry with Nimai Ghosh's Chinnamul (1950) as actor and assistant director. Chinnamul was followed two years later by Ghatak's first completed film Nagarik (1952), both major break-throughs for the Indian cinema.[13][14] Ghatak's early work sought theatrical and literary precedent in bringing together a documentary realism, a stylised performance often drawn from the folk theatre, and a Brechtian use of the filmic apparatus.

Ghatak's first commercial release was Ajantrik (1958), a comedy-drama film with science fiction themes. It was one of the earliest Indian films to portray an inanimate object, in this case an automobile, as a character in the story.

Ghatak's greatest commercial success as a script writer was for Madhumati (1958), one of the earliest films to deal with the theme of reincarnation. It was a Hindi film directed by another Bengali filmmaker Bimal Roy. The film earned Ghatak his first award nomination, for the Filmfare Best Story Award.

Ritwik Ghatak directed eight full-length films. His best-known films, Meghe Dhaka Tara (The Cloud-Capped Star) (1960), Komal Gandhar (E-Flat) (1961), and Subarnarekha (Golden Lining) (1962), a trilogy based in Calcutta and addressing the condition of refugee-hood, proved controversial and the commercial failure of Komal Gandhar (E-Flat) and Subarnarekha prevented him from making features through the remainder of the 1960s. In all three films, he used a basic and at times starkly realistic storyline, upon which he inscribed a range of mythic references, especially of the Mother Deliverer, through a dense overlay of visual and aural registers. 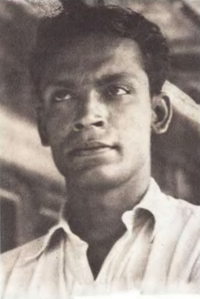 Ritwik Ghatak, in a young age

Ghatak moved briefly to Pune in 1966, where he taught at the Film and Television Institute of India (FTII). During his year at FTII, he was involved in the making of two student films, viz., Fear and Rendezvous.

Ghatak returned to film making only in the 1970s, when a Bangladeshi producer financed the 1973 epic Titash Ekti Nadir Naam (A River Called Titas). Making films became difficult because of his poor health due to extreme alcoholism and consequent diseases. His last film was the autobiographical Jukti Takko Aar Gappo (Reason, Debate And Story) (1974), in which he portrayed Neelkantha (Nilkanth) the lead character.[15] He also had a number of incomplete feature and short films in his credit.

Ghatak's elder brother Manish Ghatak was a radical writer of his time, a professor of English and a social activist who was deeply involved with the IPTA theatre movement in its heyday and later on headed the Tebhaga Andolan of North Bengal. Manish Ghatak's daughter is the writer and activist Mahasweta Devi. Ghatak's wife Surama was a school teacher. His son Ritaban is a film-maker.[16] 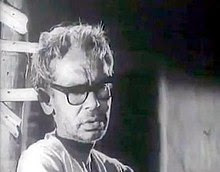 At the time of his death (February 1976), Ghatak's primary impact would seem to have been through former students. Though his stint teaching film at FTII was brief, one-time students Mani Kaul, John Abraham, and especially Kumar Shahani (among many others), carried Ghatak's ideas and theories, which were further elaborated upon in his book Cinema And I, into the mainstream of Indian art film. Other students of his at the FTII included the acclaimed filmmakers Saeed Akhtar Mirza and Adoor Gopalakrishnan.[17] Ghatak stood entirely outside the world of Indian commercial film. None of the elements of the commercial cinema (singing and dancing, melodrama, stars, glitz) featured in his work.[citation needed] He was watched by students and intelligentsia, not by the masses. His students have also tended to work in the art cinema or independent cinema tradition.

While other neo-realist directors like Satyajit Ray succeeded in creating an audience outside India during their lifetime, Ghatak was not so fortunate. While he was alive, his films were appreciated primarily within India. Satyajit Ray did what he could to promote his colleague, but Ray's generous praise did not translate into international fame for Ghatak. For example, Ghatak's Nagarik (1952) was perhaps the earliest example of a Bengali art film, preceding Ray's Pather Panchali by three years, but was not released until after his death in 1977.[13][14] His first commercial release Ajantrik (1958) was also one of the earliest Indian films to portray an inanimate object, in this case an automobile, as a character in the story, many years before the Herbie films.[18] Ghatak's Bari Theke Paliye (1958) had a similar plot to François Truffaut's later film The 400 Blows (1959), but Ghatak's film remained obscure while Truffaut's film went on to become one of the most famous films of the French New Wave. One of Ghatak's final films, Titash Ekti Nadir Naam (1973), is one of the earliest films to be told in a hyperlink format, featuring multiple characters in a collection of interconnected stories, predating Robert Altman's Nashville (1975) by two years.

Ghatak's only major commercial success was Madhumati (1958), a Hindi film which he wrote the screenplay for. The film was one of the earliest to deal with the theme of reincarnation and is believed to have been the source of inspiration for many later works dealing with the theme of reincarnation in Indian cinema, Indian television, and perhaps world cinema. It may have been the source of inspiration for the American film The Reincarnation of Peter Proud (1975) and the Hindi film Karz (1980), both of which dealt with reincarnation and have been influential in their respective cultures.[19] Karz in particular was remade several times: as the Kannada film Yuga Purusha (1989), the Tamil film Enakkul Oruvan (1984), and more recently the Bollywood film Karzzzz (2008). Karz and The Reincarnation of Peter Proud may have also inspired the American film Chances Are (1989).[19] The most recent film to be directly inspired by Madhumati is the hit Bollywood film Om Shanti Om (2007), which led to the late Bimal Roy's daughter Rinki Bhattacharya accusing the film of plagiarism and threatening legal action against its producers.[20][21]

Ghatak's work as a director also had an impact on many later Indian filmmakers, including those from the Bengali film industry and elsewhere. Ghatak is said to have influences on Kumar Shahani, Mani Kaul, Ketan Mehta, and Adoor Gopalakrishnan.[4] For example, Mira Nair has cited Ghatak as well as Ray as the reasons she became a filmmaker.[22] Ghatak's impact as a director began to spread beyond India much later; beginning in the 1990s, a project to restore Ghatak's films was undertaken, and international exhibitions (and subsequent DVD releases) have belatedly generated an increasingly global audience. In a critics' poll of all-time greatest films conducted by the Asian film magazine Cinemaya in 1998, Subarnarekha was ranked at No. 11 on the list.[23] In the 2002 Sight & Sound critics' and directors' poll for all-time greatest films, Meghe Dhaka Tara was ranked at No. 231 and Komal Gandhar at No. 346 on the list.[24] In 2007, A River Named Titas topped the list of 10 best Bangladeshi films, as chosen in the audience and critics' polls conducted by the British Film Institute.[25]

Though Ghatak is mainly known as film director, he wrote many stories, plays too. In his creative career, Ghatak made 8 full length feature films and few short films and documentaries. He also wrote many short stories, plays and poetries. Ghatak wrote more than 50 articles and essays on film.