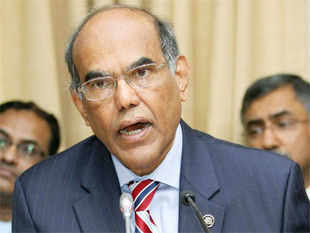 In an era when many central banks have lost some of their independence, Subbarao cussedly took on the ministry, even though he ended up baffling markets.

MUMBAI: Rarely do bank chiefs take a call on interest rates minutes before boarding an aircraft. But the person, headed for Mumbai after a meeting between the FM and bankers, was bent on lowering rates before others did. Next morning, the act was followed by the chairman of another state-owned lender that slashed rates by a few more points.  There's nothing unusual in government banks trying to outgun each other to keep New Delhi happy. But here, the actions, though token in nature, happened just a week before RBI squeezed the money market and pushed up bond yields to rein in the rupee. While the central bank's recent tightening measures may have been endorsed by the ministry, banks and markets have often found themselves caught between conflicting signals emanating from Mint Street and North Block. In an era when many central banks have lost some of their independence, Subbarao cussedly took on the ministry, even though he ended up baffling markets. Last year, the differences came to the fore when Chidambaram could barely mask his disappointment when he told the media, "Growth is as much a challenge as inflation. If the government has to walk alone to face the challenge of growth, then we will walk alone". The finance minister was upset over RBI's decision to leave interest rates unchanged oninflation concerns despite the Centre announcing a fiscal consolidation road map. Chances are the relationship may have worsened since then. On Tuesday, Subbarao minced no words to tell the media that issuing a sovereign bond - one of the proposals the finance minister recently indicated was "on the table" - could impact the country's financial stability. Uncharacteristically testy at the press conference, the RBI governor, when asked how long the present measures could last, quipped that the term "temporary" is being used the way a standard-10 student would describe them. The equations may have changed dramatically after Subbarao became the RBI governor in 2008, possibly the worst time to head a central bank. Having served as finance secretary, his appointment was cleared during Chidambaram's first tenure as finance minister in the UPA government. While Subbarao had backed an independent debt management office during his stay in the ministry, his views changed after stepping into RBI. As recently as June, Subbarao made it clear that he was against a bigger role for the government in financial stability and regulation when lawmakers the world over are empowering regulators with greater autonomy. The idea of a statutory role for the Financial Stability and Development Council (FSDC) headed by the FM instead of its present role as a coordinator among regulators, according to Subbarao, would achieve little.What the FM perhaps underestimated was the power of the old boy network. Every action of Subbarao was supported by former RBI governor Chakravarthy Rangarajan and tacitly backed by PM Manmohan Singh, another former governor. Thus, the rift between the minister and the governor, which occasionally boiled over to the media, could well be an outcome of politics at a different level.
It may be a little too early to judge Subbarao, often blamed for failing to act on time to raise rates to tame inflationary expectations or buy dollars to shore up forex coffers. When Bimal Jalan took over as the RBI governor in November 1997, Rangarajan, widely believed to be Subbarao's mentor during the past five years, had said, "I was a war-time general. I hope Bimal can be a peace-time statesman". Having taken charge a week before Lehman Brothers filed for bankruptcy, Duvvuri Subbarao could have only been a general in an unprecedented debacle. Posterity would judge whether he fought with his master to mask his own failures or did his best in a crisis he wasn't prepared for.
http://economictimes.indiatimes.com/news/economy/indicators/d-subbarao-cussedly-took-on-finance-ministry-and-refused-to-toe-its-line/articleshow/21495874.cms?curpg=2
Posted by Palash Biswas at 3:57 AM