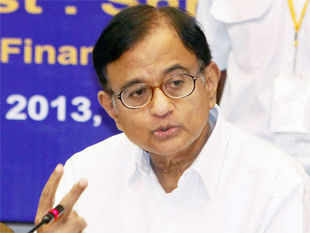 The finance minister declined to speculate on the identity of Subbarao's successor. "There is no frontrunner. This is not a race," he said.

NEW DELHI: Reserve Bank GovernorDuvvuriSubbarao is keen to "move on" and a search for his successor is underway,Finance Minister P Chidambaram said on Tuesday, making it clear that the bureaucrat-economist would not get another term.  "Dr Subbarao had met me a few weeks ago and said he would like to move on and he would not like to be considered for another term. I accepted. So now we are in search mode," he said in the course of an hour-long interview at his North Block office during which he also strongly criticised former chief auditor Vinod Rai for inflicting what he termed as "considerable damage to the system". The 67-year-old politician from Tamil Nadu, who was switched from home to finance just over a year ago, said he was confident of financing the current account deficit "for now" as inflows had resumed. To achieve this, further measures to contain the current deficit account, which stood at a worrying 4.8% of GDP in fiscal 2012-13, including higher duties on "inessential" imports, were on the cards. There was no target for the rupee, which closed at a three-week low of 60.48 to the dollar on Tuesday, said Chidambaram while expressing concern about "speculative attacks" on the currency. The finance minister declined to speculate on the identity of Subbarao's successor. "There is no frontrunner. This is not a race," he said. Raghuram Rajan, the government's chief economic advisor, department of economic affairs secretary Arvind Mayaram and Planning Commission member Saumitra Chaudhury are said to be among the contenders to succeed Subbarao, whose term ends on September 5. Originally appointed for three years in 2008, Subbarao was given a two-year extension. In a recent interview to Reuters, Subbarao had said the question of him getting another extension was hypothetical, and that he was ready to move on. Chidambaram, whose first stint in government was under Rajiv Gandhi, laid some of the blame for the policy paralysis at the doors of the higher judiciary and the Comptroller and Auditor General of India (CAG). "I think the former CAG did considerable damage to the system. He exceeded his jurisdiction and exceeded his mandate," he said. During Rai's tenure, CAG came up with a series of reports accusing the UPA government of humungous acts of corruption, notably in the telecom and coal sectors. Rai, who was financial services secretary under Chidambaram, headed CAG from early 2008 to 2013. "We are importing 160 million tonnes of coal when we should be exporting coal. We have reserves for over 200 years," the finance minister said, spelling out the impact of the ham-fisted intervention. A2012 CAG report on the allocation of coal mines, which alleged gains to private sector companies to the tune of Rs 1,86,000 crore on account of getting hold of mines without an auction process, has sparked off a CBI investigation.
The Supreme Court is monitoring the investigation and there is speculation that the court might cancel all allotments. The renowned lawyer, who is in his third term asfinance minister, also expressed disquiet over the blanket ban on mining of iron ore in states such as Karnataka and Goa. "I don't know what the Supreme Court will do (with regard to cancelation of coal mines). All I am saying is if there are individual cases where somebody has profited through a wrong decision, punish the wrongdoer but you can't throw the entire system out of gear that we have stopped producing coal. We have stopped producing iron ore and exporting iron ore. Soon there may be a situation where we will have to import iron ore and import steel. Is that the way to run the industrial system in a large country like India with 1.3 billion people?" A"reconstituted UPA -3" would assume power after the general elections under the leadership of Congress, Chidambaram asserted. "I believe that ultimately they will vote for a set of parties which will gravitate towards the Congress party. Therefore, there is a very good chance that UPA-3 will be formed under the leadership of the Congress party. The pre-poll allies before the elections and the post-poll after the elections will make up UPA-3." The ministerexpressed confidence that growth would be higher than the 5% recorded in 2012-13, the lowest since 2002-03 on account of a good monsoon.
More from The Economic Times
More from the web
Posted by Palash Biswas at 3:53 AM