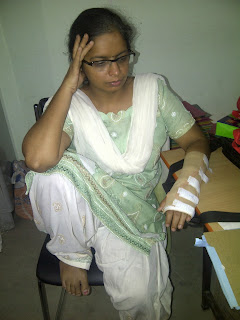 https://www.facebook.com/lenin.raghuvanshi/media_set?set=a.10202345634742071.1228281279&type=3
I thought that fracture in finger of hand of Shruti Nagvanshi.She is suffering with severe pain and swelling. Medico legal process of Shruti completed.We are waiting X ray of Shrutis' Hand.It is noted that before this incident,the First Information Report (FIR) lodged case no. 359/13 under section 307, 452, 343 and 325 of Indian Penal Code after the intervention of Circle Officer, Cantt. But till date the investigation officer did not come to take my statement. However the Pahadiya police chowki is continuously making pressure to compromise.Sunil Gupta is continuously active on facebook (http://www.facebook.com/profile.php?id=100005957461849&fref=ts) and he misused the many picture of Shruti Nagvanshi and she filed case against Sunil Gupta in Cantt police station crime no. 418/13 under section 66ग, 66घ, 67 of IT Act.

On 12th June, 2012 Sunil Gupta in its profile put the picture and tagged himself as Lord Krishna, his wife Sapana as Draupati and me as Duryodhan. It is against the Hindu religion according to the Hindu Marriage Act Sunil Gupta and Sapana Chaursiya are husband and wife. But Government and police department are doing nothing.

After my protest in Cantt police station,nearly 2 AM of 20 October 2013, police brought to me and Shruti at Government Hospital. Medico legal of Lenin done,but not to Shruti. Medical Doctor informed me that cantt police brought me in writing that I had consumed alcohol.Police did not want to mention my wounds.Docotr told that there is no consumption of Alcohol.I immediately understood and started protest in cantt police station. I wrote FIR but police did not want to file that FIR.So in pressure I made mild and FIR filed as crime number 241/13 under 323,427 IPC at 8.30 Am but date in NCR 3.40 AM.Then Shruti went for medico legal.PVCHR informed to NHRC and other officials.
It is a clear case of frustration of suspect criminals after the announcement of NHRC order for CBCID in case of Sapana.
http://www.pvchr.net/2013/10/curtain-raiser-in-case-of-threat-to.html
Petition by PVCHR:
http://www.pvchr.net/2013/10/immediate-action-to-protect-life-of.html
Posted by People's Vigilance Committee on Human Rights at Sunday, October 20, 2013

Posted by Palash Biswas at 9:45 PM