Bengal Tigress seems glad and let us hope something Better than Singur and Nandigram! 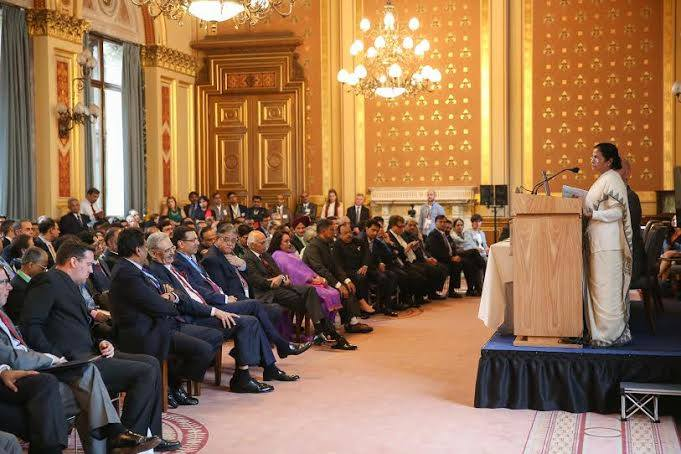 We had an excellent round of exchanges on investment and other collaborations between United Kingdom and Bengal at the historic Locarno Suite of the Foreign and Commonwealth Office, London.

My heartiest compliments to Hon'ble Minister, Preeti Patel, UKIBC Chair, Rt Hon Patricia Hewitt, business delegates of UK and my entire team of Paschimbanga Paribar and industry friends. We have signed 21 Memorandum of Understanding (MOU) and other business documents between UK and Bengal.

I am quite optimistic and hope that today's developments will pave way for more dynamic business relations between UK and Bengal across several sectors.

Best wishes to everyone.

Didi visited Buckingham Palace!The place every Bengali would love to visit.I would have loved to see her with the Queen but it did not happen as yet and she would stay in TATA Hotel in London and we may see it happen.The Prime Minister of United Kingdom could not understand the urgency and the poor guy opts to be out of London.

Never mind it is the Tata Hotel which heralds some better days for Bengal,of course,better than Singur and Nandigram.

Mamata Banerjee's first day in London will be memorable more for her security guards than anyone else.

After breakfast at the St James Court - where the Chief Minister of Bengal is staying during her 5-day visit to London - Ms Banerjee decided to take a walk around the streets of London, apparently to beat jet lag. The 7-km walk was done in quintessentially Mamata Banerjee style - rubber flip flops and cotton saree and a shawl to beat the cold winds

Didi remains in power whatever might come as she has managed a solid Vote Bank and it seems she is free to make turnaround whatever we might not expect.

Right now,it seems to be the lesson from London and we have enough time perhaps to wait for our lovely Didi to make a LONDON of Kolkata.

West Bengal chief minister Mamata Banerjee on Monday greeted the "great nation" of Britain as she landed here on a five-day visit seeking to woo foreign investment for her state.

"Just landed in London with business delegation from Bengal. Greetings to the people of this great nation," the Trinamul Congress leader tweeted.

Her visit starts with a briefing by the Indian high commissioner to the UK, Ranjan Mathai, followed by a reception hosted by Prince Andrew, the UK's special representative for international trade and investment, at Buckingham Palace.

West Bengal Chief Minister Mamata Banerjee-led delegation to the UK on Tuesday clinched 21 MoUs with the UK in the fields of industry, health, education and urban development.

The agreements were signed during a bilateral meeting with Britain's Minister of State for Employment and British Prime Minister David Cameron's Indian Diaspora champion Priti Patel at a reception hosted at the Foreign and Commonwealth Office (FCO) here.

"This is a landmark visit, these MoUs will help bring the UK and West Bengal ever closer, and unleash the potential of our relationship," Patel said in her address.

"For 34 years, West Bengal languished under Communist rule. The state had tremendous potential, but that potential remained unfulfilled. I am delighted to say that things are changing fast. Today, West Bengal is on the move.

"Under Mamata Banerjee's leadership the state is enjoying a renaissance and its potential is beginning to be realised," said the Indian-origin minister, who had accompanied Cameron to Kolkata in 2013.

"The Prime Minister was impressed. It was clear to him this was a state and a Chief Minister that we could do business with. That's why he invited you (Banerjee) to visit London," she said on behalf of the British Prime Minister, who is on a tour of South East Asia.

Earlier, Cameron in a letter to Banerjee wrote, "I am sorry that my travel plans mean I will not be in London to see you in person. Our relationship with India is a priority for the UK and we look forward to welcoming your Prime Minister to the UK later this year."

Commenting on the personal letter from Cameron, Banerjee responded, "21 MoU's are a good sign of Britain's partnership with Bengal. I thank him for his good wishes."

The MoUs included academic exchange programmes between the University of Cambridge and Presidency University, Kolkata, in the field of Arts and Humanities and between London-based School of Oriental and African Studies (SOAS) and Presidency for the study of Bangla language.

In the health sector, a MoU was signed between the Institute of Health and Family Welfare, Government of West Bengal, and the UK's Royal College of General Practitioners for technical support for running post-graduate diploma courses on family medicine.

It also included a technical collaboration for development of micro climate controlled bio domes for "Eco Tourism Township" in Kolkata. Banerjee is on a five-day visit to the UK and is accompanied by a 62-member delegation.

Raising the investment potential of Bengal in the UK and facilitating collaborative efforts to set up business in both destinations, promotion of Bengali handicrafts and a series of private sector joint ventures are expected within the industry segment.

She decided to walk down Victoria Street and led herself into St James Park - no Google maps, no local Londoner to show her the way. That was the way she explored central London.

Belatedly realising their Chief Minister was off for an impromptu walk, some from her nearly 50-member team of officials rushed to join her.

"As usual Madam did her brisk walk looking around London, the large stone structures and seemed very impressed," a senior official said.

The walk ended with a visit to a coffee shop.

Coffee shops like these were "a must" in Kolkata and may mean more jobs, an official recalled her saying.

The Mayor of Kolkata -- unaware that the Chief Minister has decided to fight jet lag by walking around the streets - was said to have a verbal message sent to her through an official was accompanying her.

The message: "Please look around London, and see if we can take ideas for the city of Kolkata back with us".

Back home, the Chief Minister has  already started a project to beautify the Hooghly (Ganga) river, taking London's Thames river as a model. The promise was made before the assembly elections in 2011.

During this visit, Ms Banerjee is expected to meet various British officials to seek investment for Bengal. 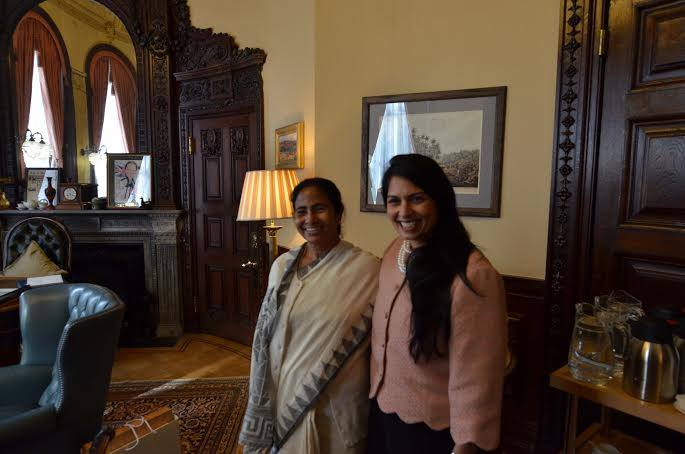 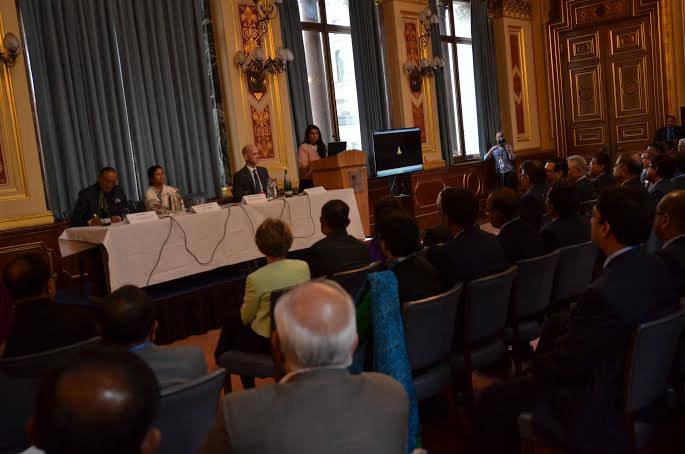 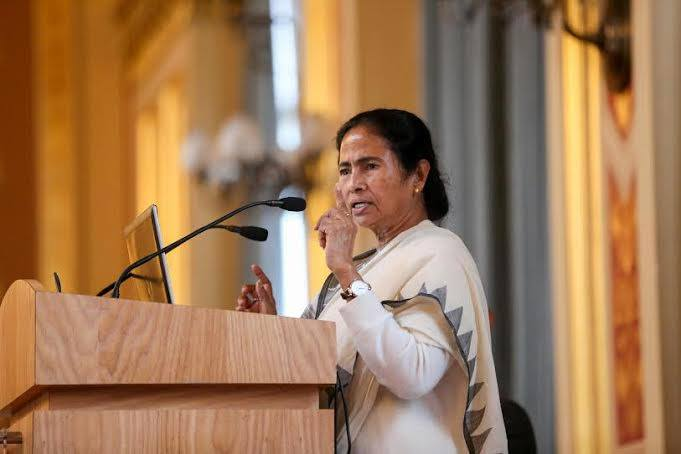 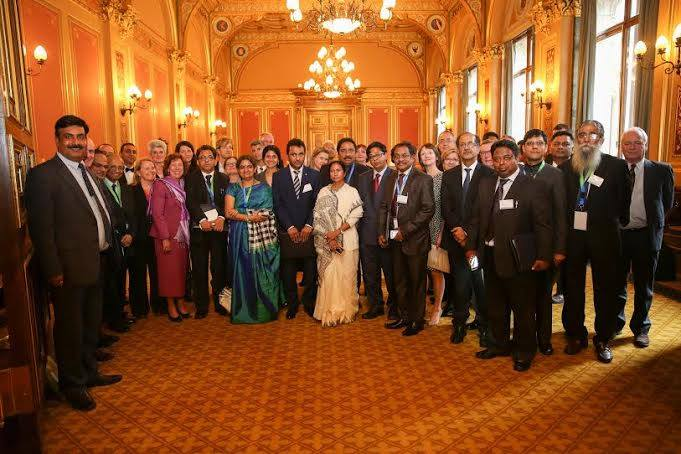 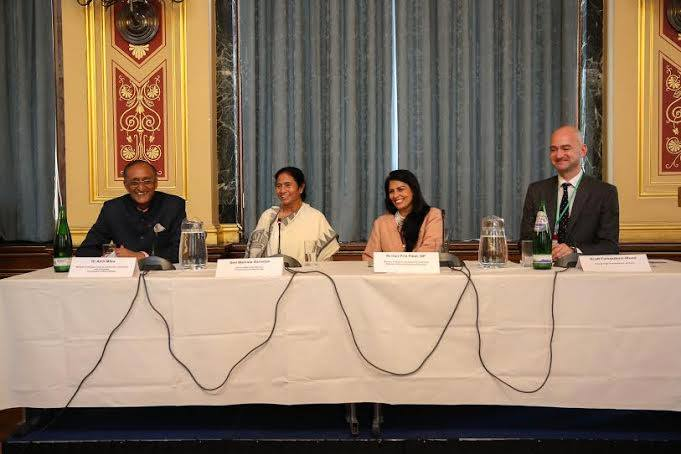 Mamata Banerjee walks around London in her own inimitable style 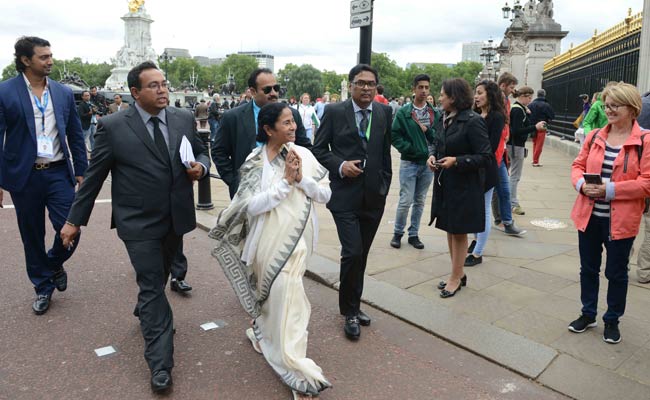 Mamata Banerjee on her walk in London.

For a popular leader like West Bengal Chief Minister Mamata Banerjee, walking 7km is just another day in the office, probably one among the hundreds of processions that she had led in her life.

However, on Monday the venue moved to central London, where Mamata took an impromptu walk — apparently to beat the jet lag.

After breakfast at the St James Court — where Mamata is staying during her 5-day visit to London — she decided to take a walk around the streets of the imperial city.

The 7-km walk was done in her inimitable style ——— wearing rubber sandals, cotton sari and an ordinary shawl to beat the weather.

"The primary objective of the visit is to understand urban development and emulate the same in Kolkata. There is no better way to understand a city than to walk around. Madam showed us the way," said a senior official accompanying her.

Even the mayor of Kolkata, Sovan Chatterjee, was taken by surprise when she received a text message: "Please look around London, and see if we can take ideas for the city of Kolkata back with us..

Mamata is known to walk very fast and this time industrialists accompanying her got a taste of the same.

"She really walks fast. By the time we had covered few hundred metres she was almost a kilometre ahead," said a city-based realtor accompanying the chief minister.

The walk reportedly ended at a coffee shop, which apparently impressed Mamata who hoped to set up many such facilities in Kolkata.

She also went to Buckingham Palace on her first day of the visit at the invitation of Prince Andrew, the Duke of York, who hosted her for evening tea.

However, she could not meet British Prime Minister David Cameron who had written a personal note of apology to the chief minister for the same.

Prince and I: When Mamata Banerjee visited Buckingham Palace

Excerpts from the film reimagined and reinterpreted with real pictures from Didi's tea.

The King and I a Rogers and Hammerstein musical (yes the same people who did The Sound Of Music) was about an educated Welsh widow (Deborah Kerr) who becomesa live-in governess to the King of Siam (Yule Brenner). In the movie Siam's King and its politics were exotic to the wide-eyed widow Anna. Maybe quite as much as ourtangail jamdani wrapped chappal wearing didi was to the Prince.

Excerpts from the film re-imagined and re-interpreted with real pictures from Didi's tea with the Prince .

King: Now, shall Mr Lingkong be winning this war he is fighting at present?

Anna: No one knows really.

King: Well, does he have enough guns and elephants for transporting things?

Anna: I don't think they have elephants in America, your majesty.

King: No elephants? No wonder he is not winning war!

Didi: Say, how do you manage to keep you streets so well ordered despite the traffic?

Prince: No one knows really.

Didi: Well, don't the hawkers and autos cause trouble?

Prince: I don't imagine have either in London.

Didi: No autos? No wonder its all so orderly!

Anna: And very nicely, too.

Didi: Good day, Your Grace.  Though you know me as Mamata Banerjee, my country men call me didi. I already speak English.

(tongue firmly in cheek) Prince: And very nicely, too.

King: [in agreement] It is a FALSE lie!

Sanjeev Goenka: I think Kolkata will be London anytime soon.

Prince: Oh, but this is a lie!

Didi: [in agreement] It is a FALSE lie!

(Sanjeev Goenka breaks into  a grin) 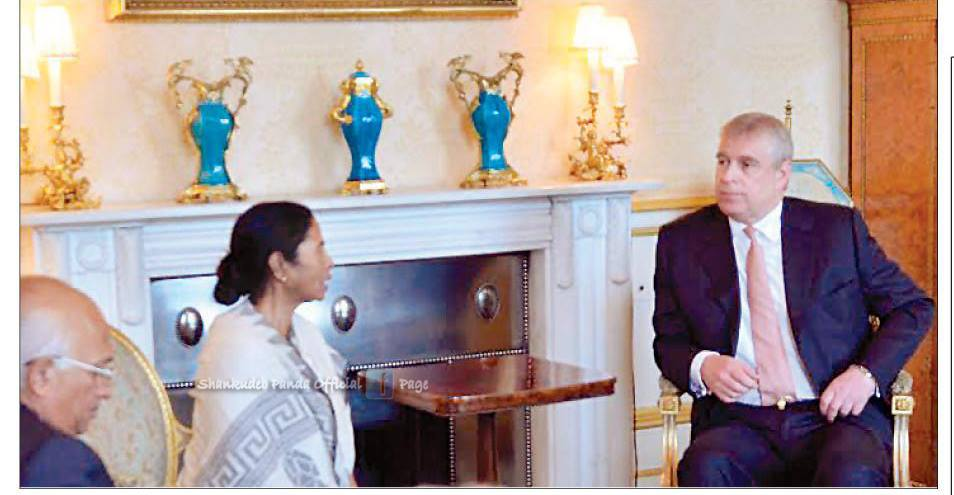 King: You are very difficult woman!

Anna: Perhaps so, Your Majesty.

Prince: You are very difficult woman!

Didi: Perhaps so, Your Majesty.

Prince and I: When Mamata Banerjee visited Buckingham Palace

Excerpts from the film reimagined and reinterpreted with real pictures from Didi's tea.

--
Pl see my blogs;
http://ambedkaractions.blogspot.in/
http://palashscape.blogspot.in/
Feel free -- and I request you -- to forward this newsletter to your lists and friends!
Posted by Palash Biswas at 12:37 PM