We might not control affairs in Pakistan or elsewhere but we should learn to protect national interest against foreign intervention.

We might not control affairs in Pakistan or elsewhere but we should learn to protect national interest against foreign intervention.
Palash Biswas 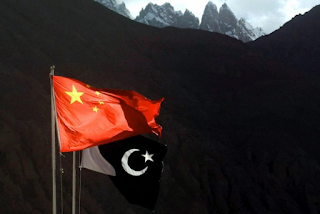 China has increased their military presence in Pakistan Kashmir and Gilgit Baltistan under the pretext of ensuring safety to their workers. It has to be.If you allow free flow of foreign capital then the foreign forces have to be invited to protect their companies and workers irrespective of complications.It is not the specific case study in Pakistan only as China has almost captured our consumer and electronic market and the business friendly governance my not stop them to start their production units in India.
As India is no more friendly with Nepal,we have to lose our strategic advantage in Nepal.At the same time,China gets the advantage at our cost.I have been warning against this diplomatic strategic disaster time  and again.
We might not control affairs in Pakistan or elsewhere but we should learn to protect national interest against foreign intervention.
I am sharing a press release sent by International Human Right Defender to understand how alarming it might turn as follows:
25th November 2015
Press Release
China in Pakistan: Conference hosted in the European Parliament
25th Nov 2015, Strasbourg:  International Human Rights Defenders and Members of the European Parliament today jointly hosted a conference on CHINA IN PAKISTAN: GROWING HUMAN RIGHTS CONCERNS in the European Parliament in Strasbourg. The conference was attended by more than 120 participants from European Parliament, Civil Society and European Union.
The conference has the following speakers
• Mr. Ryszard Czarnecki, Vice President European Parliament
• Mr. Alberto Cirio, Member of the European Parliament
• Mr. Fulvio Martusciello, Member of the European Parliament
• Ms. Patricia Sulin, Member of the European Parliament
• Mr. Javed Mohammed Khan, Deputy Director, Baluchistan House
Mr. Li Xi Chen, who is a freelance journalist, moderated the conference.
Mr. Ryszard Czarnecki spoke how China is engaged in Pakistan Occupied Kashmir and Gilgit Baltistan in construction ranging from dams, highways and ports. He spoke that It has come to notice that there is a lot of resentment among locals in the region of Gilgit Baltistan and Pakistan Occupied Kashmir over the negative environmental impact and the utter disregard for environmental safety norms by the Chinese infrastructure developers. Chinese construction projects literally trash the environment.
Mr. Alberto Cirio spoke that China has increased their military presence in Pakistan Kashmir and Gilgit Baltistan under the pretext of ensuring safety to their workers. He also mentioned that the chinese army has started to create divide among the shia and sunni's in the region, which is causing a direct threat to the region and not only the locals . Mr. Cirio mentioned that the presence of the Chinese army in the region is a threat to the stability of the region and questioned by Pakistan allowed chinese army when it always opposed the presence of the Western Allied Forced in the region. He also mentioned that there should be a mechanism setup to investigate the adverse effects of the presence of the chinese army in the Pakistan Kashmir and Gilgit Baltistan.
Mr. Fulvio Martusciello how Pakistan gifted to China the Gwadar port for making a naval port for parking chinese naval ships. He also mentioned that this port has cost several lives of the local baluch people, as several farms were taken forcefully and any news regarding the Naval port is kept under tight lips by the Pakistani Government.
Ms. Patricia Sulin, mentioned that china has taken the lead in Gilgit Baltistan and parts of Kashmir controlled by Pakistan in developing schools, hospitals and other emergency services in order to rebuild the area. She also mentioned that due to this assistance the pakistani government gave mining licence to Chinese companies which has inturn endangered natives over their lands. She will be requested European External Action Service (EEAS) to look into the matter and increase the pressure on the Pakistani Governments to withdraw Pakistani and Chinese personnel to decrease the tension.
Mr. Javed Mohammed Khan, spoke about the capital punishments in pakistan is only focused on the people from Baluchistan. He mentioned that Baluch people are subject to capital punishments without even going through courts, as the local Army and Pakistani Intelligence ISI issue orders for doing the same. He also mentioned that Police commit widespread abuses, he quoted the Current Pakistani Interior Minister Chaudhry Nisar Ali Khan in a parliamentary speech accepted the fact that there are many spy agencies in occupied Baluchistan, when he said, "If so many agencies, with so many resources, cannot handle the security situation what else can our government provide them?" Pakistan also continues its kill and dump policy in the region. Rights activists say 336 bodies were found in alleged "kill-and-dump" cases in 2015.
For Media Contact
Mr. Ryan Cameron
--
Pl see my blogs;
http://ambedkaractions.blogspot.in/
http://palashscape.blogspot.in/
Feel free -- and I request you -- to forward this newsletter to your lists and friends!
Posted by Palash Biswas at 6:29 AM