'Why the assault on rationalist tradition in the subcontinent?' Film Screenings and a conversation

People's Film Collective welcomes you to our upcoming film screenings and discussions onNovember 14 and December 6 to probe the question of assault on the rationalist tradition in the subcontinent, that has taken a brutal and bloody turn of late yet again.

We attach below the Bangla poster for Nov 14th, and the English poster for the screenings ofNov 14th and Dec 6th combined.

Hope to see a lot of you there!

14 November (Saturday) | Muktangan (Rashbehari) | 6 pm
YOU CAN DESTROY THE BODY
A short film by Anand Patwardhan
on the rationalist and materialist tradition, pluralism and egalitarian values in the subcontinent and the world


"The Assault on Rationalist Tradition in the Subcontinent"
Day 1: Bangladesh 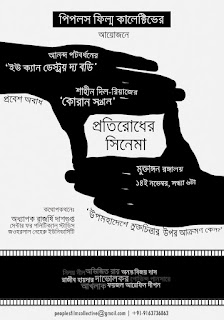 YOU CAN DESTROY THE BODY

In August 2013 while on his morning walk, the rationalist crusader Narendra Dabholkar was gunned down by men on motorcycles. In February 2015, the popular CPI mass leader, Comrade Govind Pansare, was shot dead in an identical manner. Both had been threatened by Hindu fundamentalists. In both cases no arrests have been made. This song commemorates those who throughout history, fought and paid with their lives, for reason. The song was composed by Sachin Mali who is in jail awaiting trial under the draconian Unlawful Activities Prevention Act (UAPA). It is sung by his partner Sheetal Sathe who faces the same charges but is out on bail.

At least two years, twelve hours every day, memorizing over 6000 verses from Koran–that is what small kids have to do in Hifz-Khana. Many parents send their children very willingly to this special department of a madrasa, the Islamic orthodox school. The film approaches very carefully this unique religious practice, which is contradictory to the imaginings of a jaunty and easy-going childhood. The filmmaker shows the anxieties and afflictions that motivate the parents to decide on these schools. But can the children vouch for the anxieties of their parents? With this question, Dill-Riaz starts a journey through his homeland Bangladesh, a country that is now riven between religious stringency and secular ideals. 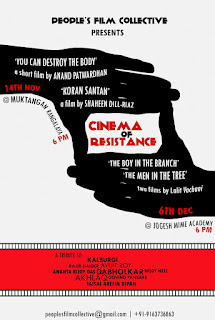 ABOUT US: We organize an annual film festival, called the Kolkata People's Film Festival, in the third week of January. Throughout the year, we organize monthly film screenings in Kolkata and also travel in Kolkata and its neighbouring districts to screen films and hold discussions/dialogues on invitation from non-funded like-minded groups, unions and organizations. We are particularly interested in screening among workers, women, children and young adults, civil society groups and folks in general who are allies of people's movements.

To organize a show in your locality please write to peoplesfilmcollective@gmail.com, or call us at 9163736863. We will get back to you.

To join our initiative as an activist, please contact us in the manner above, or simply turn up at one of our screenings for a face-to-face chat!

--
Pl see my blogs;
http://ambedkaractions.blogspot.in/
http://palashscape.blogspot.in/
Feel free -- and I request you -- to forward this newsletter to your lists and friends!
Posted by Palash Biswas at 5:47 AM