This post is about the agenda to make the Globe Hindu as RSS expands worldwide faster than ISIS!Rashtriya Swayamsevak Sangh 'shakha' spreads its wings to 39 countries!

This post is about the agenda to make the Globe Hindu as RSS expands worldwide faster than ISIS!

I am sharing it that the governance of fascism is not limited within Indian geopolitics.It is global all the way!

The Political leadership is the First Swaynsevak and the State is reduced to Manusmriti hegemony!

It would be the Global Order.Better United States of America,China and Russia should be woried.

The deprived Ninety nine percent that we have to celebrate Hindu Globe back to back India plus Nepal?

राष्ट्रीय स्वय सेवक संघ - Rashtriya Swayamsevak Sangh
_____ Swayamsevak _____ मेरा प्रश्न है , क्या पहला ''व'' और दूसरा ''व'' भिन्न भिन्न हैं _____ Swayamsevak  _____ में  जो पहला ''व''  ""W ""  से लिखा गया है और दूसरा ''व''  "" V "" से लिखा गया है ---- ''व''  दन्तोष्ठ है और "" V "" भी दन्तोष्ठ है इस लिए दोनों ''व'' केवल "" V "" से लिखे जाने चाहिए '' W "" से नहीं  क्यों कि "" W "" दन्तोष्ठ नहीं ------- इस लिए ''व'' सदा ही '' V "" से लिखा जाना चाहिए '' W "" से कदापि  भी नहीं --------
On Monday, December 21, 2015 3:31 PM, "chelvapila@aol.com" <chelvapila@aol.com> wrote:
"Namesthe, Sada Vatsale Mathru Bhoomi" is start of prayer in RSS. Nehru heard it while taking vacation in Kulu valley. We do not know what his reaction was, but we do know that once virulently anti RSS , fully knowing hollowness of his charge against it when Gandhi was assassinated,he banned it, yet the same person  invited RSS participation in Republic day parade in 1963. When some one asked why, he replied they too are patriots.  It is sterling patriotism of RSS which is by the way largest volunteer organization in the world, that made it stronger after each unjust ban imposed by Congress led governments, all bans inflicted on phony charges.
There is also another sentence in the prayer of RSS. Suseelam Jagatyena Sambrhamavet. We will dazzle the world with good character and conduct. This is typical Hindu philosophy which is viewed as all encompassing . Perhaps Hindu Dharma is the only one that emphasizes content rather than the label. Content of character supercedes all other distinctions and just being a Hindu or even being a vociferous advocate of Hindutwa does not guarantee a place either in the heaven or higher status on earth. Veda Vyasa said long time back, ' I am telling you with raised hand, even beyond the pale of Aryans ( Arya was synonymous with Hindu and both denote noble person) there are noble people.
In contrast Muhammad Ali, of Khilafat fame who was fully supported by Gandhi  who as you know was known as Mahatma, said unless Gandhi becomes a Moslem he cannot enter heaven. So also the other proselytizer insists heaven's gates are closed to any one else unless he converts to Christianity. Conduct and character are of secondary importance.
Hence all inclusive nature of Hindu Dharma for which RSS in India and Hindu Swayamsevak Sangh abroad work to preserve and inculcate the ageless values, makes it very natural for the Swayamsevaks, as the volunteers are called, to be part and parcel of host country, country of their migration  in complete amity as well as attract participation of kindred souls of all nationalities and religions in their activities.
Swadeso Bhuvana trayam.  All three worlds, (earth(Bhoomata), those below and those above) are our home lands.
Hence it is Bharatmata ki Jai in India and
Namamo Bhumimataram abroad.
Best wishes.
G V Chelvapilla
PS: We realize there are skeptics, detractors, they too should go and attend Sakhas(branches) of either RSS or HSS and have first hand experience , look and learn rather than continue to harbor baseless prejudices . Especially take children, there is much to learn about our culture and civilization and very few places to learn about them even in India , but more so abroad. Hence they will also go home enriched.
====================================================================================
-----Original Message-----From: S. Kalyanaraman <To: undisclosed-recipients:;Sent: Sun, Dec 20, 2015 5:00 pmSubject: Rashtriya Swayamsevak Sangh 'shakha' spreads its wings to 39 countries -- Anahita Mukherji
http://bharatkalyan97.blogspot.in/2015/12/rashtriya-swayamsevak-sangh-shakha.html
DEC
21 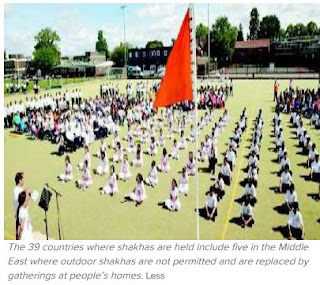 MUMBAI: Growing up on the outskirts of Pune, Girish Bagmar came from a family of Congress supporters.While he was fed up of UPA's scams in 2014, he's more inclined towards centrist politics than the right-wing BJP. Yet Bagmar, now based in Boston, sends both his sons to shakhas run by Hindu Swayamsevak Sangh (HSS), the overseas wing of the Hindu nationalist Rashtriya Swayamsevak Sangh (RSS).
Many of his Indian friends in the US work for HSS and offered to take his children to the shakha. "I've never attended HSS shakhas. I send my children there so they can socialize with other Indian children and learn about Indian culture. Growing up in India, we learnt of our culture from our grandparents' stories. I feel my children may be deprived of this; my mother cannot visit the US frequently," says Bagmar.READ ALSO:RSS plans youth meet to change anti-secular imageUSA is one of 39 countries where HSS runs shakhas, says Ramesh Subramaniam, Mumbai coordinator of RSS's overseas work. He helped set up shakhas in Mauritius from 1996 to 2004 and now heads Sewa, a platform for overseas Indians to fund RSS service projects. He says HSS works closely with other Hindu cultural organizations abroad including the Chinmaya and Ramakrishna missions."We don't call it Rashtriya Swayamsevak Sangh overseas. It's not on Indian soil so we can't use the word 'Rashtriya'. We call it Hindu Swayamsevak Sangh as it unites Hindus worldwide," says Subramaniam, adding that RSS's overseas wing is bigger than its affiliate, Vishwa Hindu Parishad. RSS is the ideological parent of nearly 40 official affiliates including VHP and India's ruling party, BJP.

The 39 countries where shakhas are held include five in the Middle East where outdoor shakhas are not permitted and are replaced by gatherings at people's homes. Finland has only an e-shakha where activities are conducted via video-camera over the internet for people from over 20 countries living in areas where HSS units are absent."The diaspora's longing for a connection with 'Indian culture', 'history' and 'traditions' in a context in which they are a minority that is not represented in the mainstream, provides a ready social basis for the RSS," says Subir Sinha, academician at the School of Oriental and African Studies, London.READ ALSO:Mohan Bhagwat arrives in Gujarat for RSS workshop"While Nepal has the largest number of shakhas outside India, US comes second with 146. We are present in every state of the US. We have shakhas in cities like New York, Washington DC, Seattle and Miami," says Satish Modh, who has been associated with RSS work abroad for over 25 years. While shakhas in India take place in open maidans, in the US, most shakhas are held in university campuses on hired parking lots, says Modh.Most overseas shakhas are held once a week. In London, they are held twice a week. UK has 84 shakhas."The sangh parivar got a boost in the UK under Blairite 'multiculturalism' in which culture was identified with religion and religion with its most hardcore version," says Sinha.The first overseas shakha is believed to have been on a ship. "In 1946, two swayamsevaks, Manekbhai Rugani and Jagdish Chandra Sharda were travelling from Mumbai to Mombasa (Kenya). Neither knew each other. One saw the other performing the right hand 'namaskar' and figured he too was from RSS. They held the first shakha together on the ship. The first shakha on foreign soil was in Mombasa," says Ramesh Mehta, a senior RSS member whose home in suburban Mumbai has played host to overseas sangh leaders for 30 years. RSS's Kenya wing, earlier called Bharat Swayamsevak Sangh, spread its ideology to neighbouring Tanzania and Uganda, and later to parts of South Africa and Mauritius. RSS sent Mehta to Zimbabwe and Kenya to set up shakhas."Many swayamsevaks in African countries had the option of moving to the UK once those countries gained independence. Haribhai Shah, a swayamsevak who moved from Mombasa to Birmingham, began UK's first shakha," says Mehta. The sangh celebrates 50 years in UK next year."Currently 25 pracharaks and over 100 vistaraks work towards spreading shakhas overseas," says Subramaniam. Pracharaks dedicate their lives to RSS and don't marry. India's Prime Minister Narendra Modi became a pracharak in the 1970s. Vistaraks dedicate less than two years of their lives to RSS and are usually students. Pracharaks from Tamil Nadu propagate HSS in Sri Lanka.While RSS insists it is not anti-Muslim, Sinha points to RSS support for far right parties in England like UKIP which has been criticized for Islamophobia. "By linking with political parties, RSS has a disproportionate influence on those parties. RSS and affiliates campaigned heavily to defeat UK's legislation to end caste discrimination," says Sinha.

Good job RSS. Hindu ideologies need to be spread. Else parasites like madarassas and missionaries will destroy Hinduism.Piyush
RSS insists its overseas activities are largely cultural and include working for the development of the countries where swayamsevaks live.While khaki shorts are the RSS trademark in India, the uniform abroad comprises black pants and a white shirt. 'Bharat Mata Ki Jay' is the chant at shakhas in India; abroad it is 'Vishwa Dharma Ki Jay.'
http://timesofindia.indiatimes.com/india/Rashtriya-Swayamsevak-Sangh-shakha-spreads-its-wings-to-39-countries/articleshow/50260517.cms

Posted by Palash Biswas at 6:41 AM