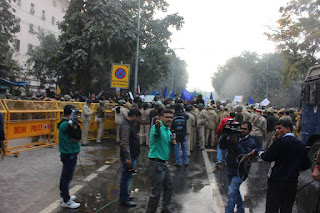 Today whilst many progressive secular organizations gathered at Azad Maidan to condemn the institutional murder of Rohit Vemula, a number of "Hindu Organizations" were also present at the site, in their own pandal.These Hindu Organizations, were spewing hatred against "progressive and Asuras", called for the murder of the Asuras as laid down by the laws of the Bhagwad Gita, as stated by Bhagwan Krishna they said. They also opposed the movement of the women demanding rights of equal access to the Shani Peth Mandir near Poona and called this as a "conspiracy of feminists and progressives, who need to be taught a lesson".
These horrors are the mirror image of the ISIS and I call them the Hindu-ISIS hordes. Both want to establish highly intolerant theocracies, male dominated and anti-women, anti-democratic, zero tolerance for any other form of views, religions, traditions, cultures. Thus where clearly the "other/s, will be at best second-third class citizens or worse.
They will be called anti-national, or anti-Islam, or anti-Hindu, Blasphemers and apostates, who must be beheaded, murdered, shot dead, or burnt alive. This is the language that they spoke, both speak everyday, fanatics across all religions speak today.
Thus, those - yes those people who believe that at the core, religion, the sacred Divine is essentially about Universal Compassion for All, those who see and and believe that all of Humanity and All of Creation is One, are the ones who need to wage a battle within their own religions and join hands across religions and spiritual streams - and none, with people who share this essential Universal Belief. No less will do, no less shall be accepted, no less will work, if we are to defend and overcome the march of the religious hordes as they burn nation after nation across the world.

--
Pl see my blogs;
http://ambedkaractions.blogspot.in/
http://palashscape.blogspot.in/
Feel free -- and I request you -- to forward this newsletter to your lists and friends!
Posted by Palash Biswas at 1:26 PM