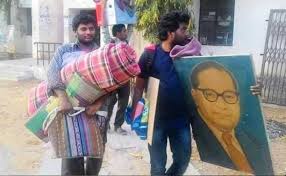 -       Urgent intervention sought from the judiciary, and Honourable President

-       Stop inducing the Casteist and Fascist agenda in educational institutes

New Delhi, January 20 : The Government, Universities Head, and the exclusionary casteist groups flourishing under the protection of political groups and affiliations have butchered another scholar Rohith Vemula.  This has once again brought to fore the stark reality of the caste discrimination which continue to flourish in our society, the institutes of higher learning, government offices, media and many other public  institutions. It's a systemic murder.

The government in power has claimed that the death of Rohith Vemula has got nothing to do with caste. We would like to say that this is completely false. His death is an example of the 'institutional and systemic bias' and nothing else. That there is a close nexus between MHRD and Hindu fundamentalist groups like AVBP is clear in the letters which the Minister wrote to VC. She cannot shrug off responsibility. Propriety demands that she steps down until an impartial enquiry is carried out.

There have been many such incidents in Hyderabad University in past as well. In 2002, 10 students were rusticated from the same college and later it was found that all the students belonged to Scheduled Caste and it was done by the present serving VC of Hyderabad University. The incidents of suicide by SC/ST students have often emerged from the prestigious institutions like IITs, IIMs, AIIMS and so on. It is often blamed on the lack of merit and their inability to cope with the higher requirements of merit, often blaming the existing system of reservations for the backward and SC/ST communities. Our collective failure to punish the perpetrators of this violence only encourages others to continue to follow the same.

Merit did not die. It kills. It lies in wait and takes the life of dalit students after they have entered the prestigious educational hellhole – by refusing to let them pass, by standing between them and the future. Merit is a murderer.

The deaths of young people, the hopes of their parents and their communities, has forced the festering casteism and anti-democracy of the 'prestigious' educational institution into the public realm.

Their deaths remind us again that Merit has blood on its hands, that bloody Merit is the offspring of generations of privilege and exploitation, that Merit was fed on blood.

The NDA Government has shown the nation that education will not become a fundamental right but can become a service for trade following WTO – GATTs. The fellowships for higher education will not be enough to provide the huge section of the society, the right to learn and serve the society; rather the rules will be amended to provide spaces to private institutions to sell the education and force the citizens either to pay huge sums of fees or to remain uneducated, unemployed, unskilled. Because for making the nation skilled, they have launched Skill India Campaign, but for education? For the roots?

The government is bent upon trampling the rights of poor and marginalised and won't hesitate unleashing violent attack on them is evident from these incidences, along with looting their natural resources for corporation in guise of development.

It's a wake up call for every conscientious citizen of this country and completely exposes our complete failure as a nation to ensure a life of dignity for all. We are witnessing nationwide protests, police detentions, beatings, speeches by politicians and expression of outrage, but what it requires is massive societal transformation, nothing less of a revolution, and one can begin with acknowledging the problem of caste discrimination and violence at every level of our society, politics and economy.

We demand justice for Rohith Vemula, his friends who were expelled and many others who continue to face the scourge of institutional discrimination across the country on a daily basis. Casteism is an age old vice. Prompt and exemplary actions on perpetuators of caste violence and a movement to remove it from all walks of our life is required. Actions have to begin at the top.

In this particular case, Central Ministers, University Authorities, Students Unions are involved but the fact remains that irrespective of the political party in power these instances continue to happen with impunity. Political parties have only played politics and its time to rise above politics and ensure justice and dignity and end this continued injustice for once and all and it requires courage. Courage to confront hidden apartheid, discrimination and ongoing systemic exploitation and denial of justice  !

WORDS OF ROHITH VEMULA 200116.doc
--
Pl see my blogs;
http://ambedkaractions.blogspot.in/
http://palashscape.blogspot.in/
Feel free -- and I request you -- to forward this newsletter to your lists and friends!
Posted by Palash Biswas at 6:21 AM