#justicetorohit:Would Rahul Gandhi change Congress to voice the Dalit Pilght and stand against the Apartheid Regime? 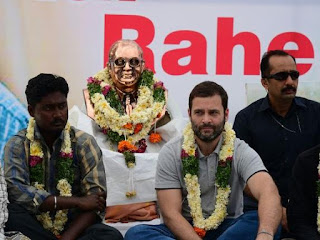 But it should not be a political gimmick as it has been all the way.Nevertheless,accusing Rahul Gandhi of using students

as a "political tool", BJP on Saturday said he was

suicide and mocked his day-long fast, saying he was

used to gatecrashing into protests of others!

Mind you,even in earlier seventies,Congress represented the Dalits.Then RSS was never a factor in Indian Politics until Ram Mandir  Movement ending in demolition of Bari Mosque and Gujarat Genocide.

Mind you, the President of India meanwhile crossed the fence and speak RSS linguistics to blame Rajiv Gandhi and Nrasimha Rao for Babri demoiltion bailing out RSS Hindutva Brigade.This President is elevated to the supreme status having completed almost his entire life as a congressman and has been accused of being involved in every scam since his entry in Indian politics way back in 1969.

It is the DNA of congress politics which failed Congress as well as the idea of India for which we the peoplehave to bear this governance of fascism.Would Rahul Gandhi  change the DNA?

If we trace the History,Gandhi opposed participation of Dr BR Ambedkar in the round table conference and claimed that he was the leader of Dalits as well as the rest of the Indian people and he considered Ambedkar politics as the partition of Indian Hindu Community.

The untouchable Balmikies from Punjab as a community representing Dalits in India wrote a letter to the queen of England that Babasaheb Dr.BR Ambedkar  was the leader of Indian Dalits.

It is well documented.

Thus,Congress always claimed to be the savior of Dalits.Nothing wrong.It should be.

Any political party in any democracy should stand for equality and justice.But it never happened.

Congress just used the Dalit Vote Bank as now,RSS using it to ensure mandate for the business friendly governance of fascism to sustain the Manusmriti hegemony making India in Free Market of ethnic cleansing.

However,Media reports,Congress vice-president Rahul Gandhi, along with former Chief Minister of Meghalaya and Congress leader P.A. Sangma, on Saturday sat on fast with the agitating students of the University of Hyderabad (UoH).

Mind you,the students are demanding that the University's acting vice-chancellor Prof. Vipin Srivastava and P. Appa Rao, whose name is there in the police complaint lodged in connection with the death of research scholar Rohith Vemula, quit their posts for their complicity in the suicide of the scholar.

Mind you,we do not support the demand ,justice to the dead young man because he was Dalit or OBC as claimed by the Manusmriti herself who further declared the movement for justice as Tamash and invoked Goddess Durga to Kill the Asura clan!

For everyone of us fighting fot #justicetorohit, it is human cause of justice and equality.

It is all about the idea of India,the Indian constitution itself and the democrat Republic of India that the regime of fascism must be resisted and the apartheid should end in annihilation of Caste,Ambedkar Mission original.

Would Rahul Gandhi stand for it?

Would Rahul Gandhi allow the excluded communities to enjoy political,economic and social equality hitherto denied despite the so much so hyped promises of our national leaders who had also been the freedom fighters and the constitutional safeguards and provision,directive principles and fundamental rights along with civic and human rights to save humanity and nature which have been both subjected to monopolistic aggression?

Welcome Rahul as Mr. Gandhi tweeted: "I am here today at the request of Rohith's friends and family, to stand with them in their fight for justice."

Meanwhile,about 20 students from Osmania university also join the protest, demanding the resignation of the vice-chancellor.

Meanwhile,students in JNU in New Delhi and students in Jadavpur and Presidency universities in Kokata do sit on hunger strike.

Meanwhile,few dalits opted to raise their voice for #justicetorohit in Bengal also despite the vertical Hindu Muslim divide and the BORGI onslaught agianst bengal once again under Peshwa raj full bollom as Bhaskar Pandit reincarnated to lead the Bajrangi Brigade in ethnic cleansing!

In Hyderabad,Vemula's mother Radhika, brother Raja, and three of the five students who were suspended — Sunkanna, Seshaiah, and Vijay — are also part of the protest demonstration.

Meanwhile, the Akhil Bharatiya Vidyarthi Parishad (ABVP) has called for a bandh of colleges in Telangana in protest against the "politics over dead bodies" done by Mr. Gandhi in the Hyderabad Central University over the Rohith Vemula issue.

This is Mr. Gandhi's second visit to Hyderabad since Vemula was found hanging in the varsity's hostel room.

Meanwhile,Prof. Vipin Srivastava, who assumed charge as interim vice-chancellor, has gone on leave for four days. A university communique issued by the Registrar's office said next senior most professor Dr. M.Periasamy shall perform the duties of the vice-chancellor of the university till further orders in terms of the Statute 1A (7) of the University.

--
Pl see my blogs;
http://ambedkaractions.blogspot.in/
http://palashscape.blogspot.in/
Feel free -- and I request you -- to forward this newsletter to your lists and friends!
Posted by Palash Biswas at 7:28 AM