Mumbai | 6th April, 2016: Slum residents from all over Mumbai threatened by illegal forcible eviction and annoyed by lack of basic amenities in slums, marched from Carnac Bunder to Azad Maidan, Mumbai on 5th April, 2016 in a huge rally demanding housing right to be ensured with all the basic amenities. Slum residents also demanded the scientific shutting down of the Deonar Dumping ground and a scientific waste-management system in the city. 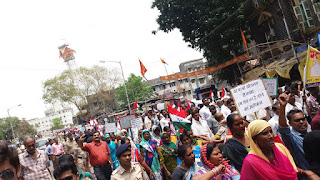 Over 5000 people from Mankhurd to Malad- Deonar, Govandi, Cheeta Camp, Golibar, Andheri and Malad,  took out a procession led by Ms. Medha Patkar. Winding through the narrow streets of the business district of the city, the rally brought traffic to a halt over a 2 km stretch. Children from many such threatened slums left school while men and women took leave from their work to walk in the blazing noonday sun to show solidarity raised slogans throughout the long march. 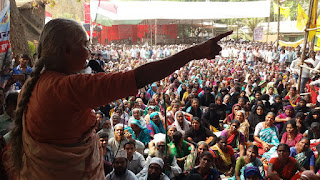 A delegation comprising of activists Ms. Medha Patkar, Anil Hebbar, Bilal Khan and representatives from slums were Shriram Rajbhar, Punam Kannaujiya, Abha Tandel and Uday Mohite met the Chief Minister in the Vidhan Bhavan. Delegation discussed four major demands with the Chief Minister-ensuring of the housing rights, protection of slum dwellers living on lands recently constituted as 'reserved forest', ensuring of the basic amenities in all slums and a scientific solution of waste management in the city.   The Chief Minister had listen to all the demands in details and assured action on them.

Ghar Bachao Ghar Banao Andolan which has been fighting for the housing rights of the urban poor in Mumbai since 11 years has threatened of intense struggle if firm actions are not taken within a period of one month on the demands raised.

Demands mentioned in the memorandum given to the Chief Minister are as follows:

Mumbai is a city that functions because of the tireless labour of slum dwellers. The finance industry works on the labour of slum dwellers, from the construction workers who build new sky scrapers and office complexes, to the cleaners and municipal sweepers that maintain them.  The lives of upper and middle class families also depend on the services of slum dwellers. The average upper or middle-class Mumbai family uses the labour of several slum dwellers in their home as domestic help, and benefits from taxi drivers, rickshaw drivers, dabbawallas, washermen/women, skilled and unskilled workers like carpenters, electricians, mechanics, painters, locksmiths, fruit and vegetable vendors, municipal sweepers, watchmen, security guards, private drivers, and countless other unregulated professions. Our demands mainly focuses on urban poor of the city and the recent outbreak of fire at Deonar Dumping Ground.

Life in the slums of Mumbai, which constitute more than 50% population of the city in the absence of 'housing right' has become pathetic. The only mechanism the Government of Maharashtra is using to give protection to slums is of a 'cut-off-date'. The 'cut-off-date' protects only limited number of slum dwellers from getting evicted without rehabilitation. The concept of rehabilitation of slum dwellers through Slum Rehabilitation Authority of Maharashtra Government is entirely pro-privatization and least pro-people. A large chunk of public land gets privatized when it is handed over to the private builders to be exploited by them while rehabilitating the slum dwellers after demolishing their self-built structures to house themselves.  This process of rehabilitation will surely make Government loose all public lands which was earlier in the possession of poor people to few private builders.

The perpetual practice eviction of slums deprive people of their housing right which comes under Right to Life guaranteed by the Constitution of India. The eviction causes a lot of instability in the society, affect the evicted slum dwellers emotionally, physically and psychologically.  Evictions also severely affect the livelihood of the slum dwellers.

We request you to immediately pass a no eviction order for slums and consider the legalization of self-built housing in the slums of Mumbai. This could be achieved by creating "Special Housing Zones (SHZ)" in areas currently occupied by slums. People's organization, NGOs and Government will work together with the inhabitants of each SHZ to improve basic infrastructure and social services. Legal, regulated SHZs enable the provision of adequate, affordable housing to every citizen of Mumbai, and to eliminate the anti-social elements that currently take advantage of the land occupied by slums. SHZs will allow active and honest intervention by local authorities to check the unjust encroachments of land by mafias and selling huts built on them.

The brutal and forced evictions being carried out by Mangrove Cell of Maharashtra Forest Department has put lives of thousands of poor children, aged persons and women in jeopardy whose houses have been demolished by the Cell in Mumbai. The Mangrove Cell is taking action on the lands which the Government of Maharashtra has decided to constitute them as 'reserved forests'. However, there is a full long procedure of law to be completed first before the Mangrove Cell takes any action. The details of which are given in next paragraphs.

The Hon. Bombay High Court passed an order dated October 6, 2005 directing the Government of Maharashtra to declare all mangrove areas and the areas within 50 meters of the mangrove areas as 'protected forest' (For Government Lands) and 'Forest' (For private lands), as per law. This exercise was to be carried out on the basis of satellite maps made by the Maharashtra Remote Sensing Application Center (MRSAC) of the mangrove areas in Mumbai and Navi Mumbai. The maps prepared by MRSAC demarcated the areas, are all post year 2005 (after the passing of the order by the Hon. Court). Hence, no question of identifying the areas in the maps which are before the year 2005.  But the Mangrove Cell is not even sparing the slums which are protected by cut-off-date of  1.1.2000 set by Housing  Department of the Maharashtra Government dated 16th May, 2015.

The Maharashtra Government, apparently in order to implement the order of the Hon. Court efficiently, decided to declare all mangrove areas as 'reserved forest'. This was decided vide Government Resolution number S-10/2013/P.K. 64/ F-3dated 26/June/2013. But it has been found that the Mangrove Cell is violating the Indian Forest Act, 1927 by not allowing the Forest Settlement Officer to exercise his powers.  In Chapter II of the Indian Forest Act, 1927, there is a full procedure specified to be followed before constituting any land as 'reserved forest'. This procedure also includes the settlements of the existing rights of people over a land which the Government decides to constitute as 'reserved forest'.

Generally, the basic services are denied by the government because of the wrong perception about the slums that providing of the basic services will cause the exploitation of the resources. However, it has been found that in the absence of basic service from the municipal corporation, slum dwellers are forced to depend on local mafias who sell them these services at higher rates illegally. Hence, this proves that the government refusal to provide service to the slum, indirectly supporting the mafias and costing the exchequer of the state. It is necessary that the government must regularize and provide all the basic amenities and leave no room for the mafias to breed in slums.

3.1  Water: The problem of supplying water to slums has still not resolved till date even after clear order from the Hon. Bombay High Court's order dated 15th December, 2014. The Court had ordered to provide water in each slum in Mumbai irrespective of cut-off-date. The Court had also directed the Municipal Corporation of Greater Mumbai to formulate a policy till February 2015 specifying the mechanism of supplying water to slums. But more than one year has passed neither the MCGM formulated any policy nor has it provided water supply to slums. The MCGM is not at all prioritising the need of supplying this basic service in slums. In the absence of water supply from the municipal corporation gives water mafias an opportunity to exploit slum dwellers by charging water on higher rates. The water mafias are also responsible for making leakages in the water supply line and sell the same water in slums. If this illegal practice is stopped then surely enough of water supply can easily be supplied to slums as well as to other residents of the city.

3.2  Toilets: The Central and the Government of Maharashtra have very clearly specified in the guidelines under the Swachh Bharat Abhiyan that whether the slum is authorized or unauthorized, toilets must be built by the urban local bodies. But the MCGM in Mumbai have made a list of exclusions for constructing toilets. This list of exclusion will ensure toilets to very less number of slums and hence the objective of the Swachh Bharat Abhiyan will not be met. This will again force people to defecate in open.  There are around Rs.8000 cr. lying unused in the last MCGM budget. This year only Rs. 1 cr. has been allocated by the MCGM in the name of Swachch Bharat Abhiyan and that too for publicity of the mission. This is a strange finding.
A recent finding at the Dumping ground site was not less than a shock. We found that a public toilet was left dysfunctional. Before it was shut down, it had provided service to several slum dwellers in its proximity but shutting down the only toilet block in that locality has forced people to defecate in open.

The MCGM can easily help slums with the public toilets if it allows the slum dwellers to construct it on their own. The MCGM only need to give them permission to construct it and facilitate them in connecting the toilet with the sewer line.

3.3  Electricity: Number of slums are not given No Objection Certificates (NOCs) for setting up a electric substation in slums, which again force slum dwellers to get illegal connections from the mafias. It becomes difficult for the school going children to study in dark; hence, the need of electricity connection is very important. Apart from this, there are small scale-scale industries in slum which are dependent on electricity connections, so, the denial of the electricity connection affect this small economic unit which support lives of many.

The smoke coming from the Deonar dumping ground has turned the surrounding areas into a gas chamber. More than two months have passed and the fire is still not under control. The callous attitude of the government towards addressing the real problem of waste management is worsening the situation. People are suffering from various breathe disease and developing allergies as well as becoming vulnerable to diseases like tuberculosis because of the continuous smoke from the Deonar Dumping Ground. This health hazard has made life pathetic. The residents need a scientific shutting down of the dumping ground and a scientific plan for waste management in the city.  At the same time, the question of livelihood for the number of rag-pickers who have become dependent on the dumping ground for their work also needs to be addressed. These workers need to be integrated into any future solution for Mumbai's waste management. Barring the entry of the rag-pickers into the dumping ground will only render a large number of people unemployed and further hinder stability for thousands of the city's marginalized service providers. While if we include the labour of the rag-pickers in the working scientific waste management plan, it will certainly generate more employment and improve the living standard of rag-pickers.

--
Pl see my blogs;
http://ambedkaractions.blogspot.in/
http://palashscape.blogspot.in/
Feel free -- and I request you -- to forward this newsletter to your lists and friends!
Posted by Palash Biswas at 8:14 AM