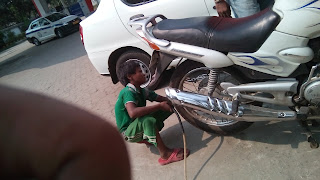 Government does say lot of things about laws but still it takes no action against child labour as the picture of a child burning his innocence in a petrol pump shows.It is daylight violation of law as well as civic sense!

Let us fight against poverty!

Let us fight against bonded labour!

Let us fight against apartheid and discrimination in any form!

Let us fight against communalism!

Let us fight against terror!

Let us fight against inequality!

Let us fight against gender bias!

Let us fight against injustice!

We all know the reality of this zingled slogan and on the same line it is quite a hollow sound-let us fight against child labour.We cry to save the children but that child should belong to our caste,our class our community.We have nothing to do with the children belong to underclasses!Thus,Child labour is the practice of having children engage in economic activity, on part- or full-time basis. The practice deprives children of their childhood, and is harmful to their physical and mental development. Poverty, lack of good schools and growth of informal economy are considered as the important causes of child labour in India. The 1998 national census of India estimated the total number of child labour, aged 4–15, to be at 12.6 million, out of a total child population of 253 million in 5–14 age group.

In India,The 2011 national census of India found the total number of child labour, aged 5–14, to be at 4.35 million, and the total child population to be 259.64 million in that age group.The child labour problem is not unique to India; worldwide, about 217 million children work, many full-time.

We are not ashamed to debate on child care and child welfare in these circumstances!

These photos from Kolkata should be very disturbing for any sensitive Indian as the child is misused as a worker in a petrol pump which is not safe for any child.Rather he or she should be engaged in his or her studies.

Any comment from the nobel laureate?Let us hear from me about the latest status of child labour since he has not spoken in public to Indian people for long!

We are habitual to see innocent child workers earning their bread and butter in our daily live in every segment of unorganised sector.

Set ahead the law of the land,on ground zero,Children are being engaged in catering, shops,begging,crimes and even in illegal mining at large scale.

But then the petrol pumps should be protected area under continuous surveillance.And we do not react while seeking fuel when we see a child pumping oil.

It is a shame that we have a nobel laureate who got the peace prize for his achievement to liberate bonded labour but India is not liberated from bonded labour at all.The nobel laureate seems to be absconding as far as Indian scenario is concerned.India is torn within in intolerance inflicted by unprecedented caste communal clash and it is almost a civil war like situation but we have not heard anything from the nobel laureate latest.

Indian law specifically defines 64 industries as hazardous and it is a criminal offence to employ children in such hazardous industries.[8] In 2001, an estimated 1% of all child workers, or about 120,000 children in India were in a hazardous job.[9]Notably, Constitution of India prohibits child labour in hazardous industries (but not in non-hazardous industries) as a Fundamental Right under Article 24.[10] UNICEF estimates that India with its larger population, has the highest number of labourers in the world under 14 years of age, while sub-saharan African countries have the highest percentage of children who are deployed as child labour.[11][12][13] International Labour Organisation estimates that agriculture at 60 percent is the largest employer of child labour in the world,[14] while United Nation's Food and Agriculture Organisation estimates 70% of child labour is deployed in agriculture and related activities.[15] Outside of agriculture, child labour is observed in almost allinformal sectors of the Indian economy.[16][17][18]

Companies including Gap,[19] Primark,[20] Monsanto[21] have been criticised for child labour in their products. The companies claim they have strict policies against selling products made by underage children, but there are many links in a supply chain making it difficult to oversee them all.[21] In 2011, after three years of Primark's effort, BBC acknowledged that its award-winning investigative journalism report of Indian child labour use by Primark was a fake. The BBC apologised to Primark, to Indian suppliers and all its viewers.[22][23][24]

It is a worldwide Save the Children launched by UNESCO!

WHY SHOULD I CARE 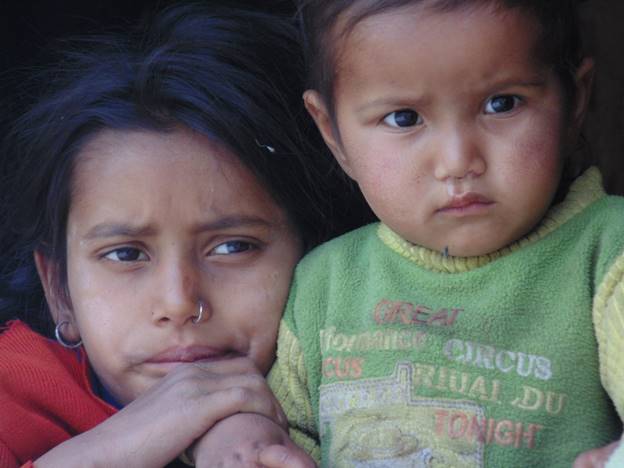 --
Pl see my blogs;
http://ambedkaractions.blogspot.in/
http://palashscape.blogspot.in/
Feel free -- and I request you -- to forward this newsletter to your lists and friends!
Posted by Palash Biswas at 3:34 AM