Missing Kalika Prasad!The artist who used to link hearts and minds for love and peace with his branded folk tune! Palash Biswas

Missing Kalika Prasad!The artist who used to link hearts and minds for love and peace with his branded folk tune!
Palash Biswas 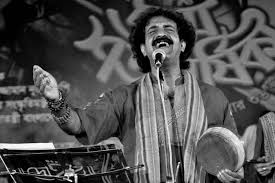 I am missing this iconic personality from Shilchar, a close friend from Blogger and writer Sushanta Kar who is the heart throb of millions of Bengalis as well as assamese which would sustain fraternity and peace in Assam at this critical selfdestructive turmoil times of communal polarization and bigotry!
Kalika Paras is as much a KHILANJIA as I myself remain a Kumyunei and uttarakhandi.
Different communities in India resettled in different states may live in peace only maintaining intimate relationship with the mainstream omunities in those states.
We need many more Kalika Prasad who so easily may unite the people against communal designs linking hearts and minds.
I am not an expert of music.But folk is the bloodstream which follows in our veins and sustains not only life it heals humanity inflicted with degenration,self destructive identity,communalism,hatred campaign,governace of fascism.
I am happy that Bengalies in general and affliated to different organizations chose the best possible way for peace and skipped the clash which was designed by RSS.
Kalika Prasad is a hero and he succumbed to injuries as he met a road accident in the late hours while he was going tp perform in Katwa in Burdwan district on teh Durgapur Expressway.
Kalika Prasad might not be compared to some one like Shachin Dev Burman or Bhupen Hazarica on musical line.
But Assam mourned for its son no less than Bengalies.It is the passion which unites us as Rabindranath said very well that different streams of humanity with diversity and pluralism makes India that it is.
Kalaika Prasad also used to sing Rabindra sangit with his branded folk tune which is rather rooted in indigenous soul and soil acrfoss the borders.
I am sorry that I was just watching Kalika Prasad performing and blooming all the way and I could not introduce to those who are unaware of his cultural activism so much so relevant.
Kalika Prasad led musical brand DOHAR which won millions hearts in no time.
Even after untimely death,the artist dealing with millions of heart irrespective of identities, Kalika Prasad and his music unite Assamese against communal conflict and we must learn a lesson that we should find such personalities in every part of the country to unite the people against the forces of violence and hatred,racial apartheid to sustain love and peace.

▶ 0:31
https://www.youtube.com/watch?v=fY-8p8dPrNY
May 29, 2012 - Uploaded by WBRi Washington Bangla Radio USA
Bengali folk band Dohar, founded 1999, is one of the leading Bangla folk songtroupes with all of their albums ...

www.indiaifa.org/kalika-prasad-bhattacharya.html
Mr Kalika Prasad Bhattacharya's research into the folk songs of industrial workers from eastern India is substantially taken up with theoretical issues about the ...
--
Pl see my blogs;
http://ambedkaractions.blogspot.in/
http://palashscape.blogspot.in/
Feel free -- and I request you -- to forward this newsletter to your lists and friends!
Posted by Palash Biswas at 11:46 PM