We Demand Justice for all Dalit Scholars!!!

Delhi Solidarity Group strongly condemns the Institutional 'murder' of Rohit Vemula at the hands of Hyderabad Central University (HCU) and appeals to everyone to participate in the joint protest led by various students and student organizations  at MHRD, Delhi against the social boycott of 5 Dalit Scholars in HCU. The casteist, Brahminical HCU VC and the ABVP goons responsible for this caste discrimination and atrocity on dalit students should be arrested and punished immediately!!! 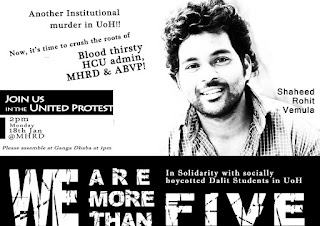 Rohith Vemula, death of a philosopher to purify higher education

Police detain a student a protesting against the HRD Ministry in Delhi over the suicide of a PhD scholar Rohith Vemula. (PTI)

Share
3200
Share
Share
Share
The Dalit student whose suicide has generated political waves was a brilliant man. His letter to Prof Appa Rao, the newly appointed vice-chancellor of the university who was once believed to be anti-Dalit by the government, shows that at the time of his suicide, he was angry, upset and depressed.
In his letter to the VC, written on December 18, 2015, Rohith Vemula had said, "Give us poison or long ropes to hang ourselves". His suicide note was far more gracious — he blamed no one but himself to have been born in such a society.
Even in his final moments, Vemula made a major point. The institutions of higher education in India do not allow the Dalits to study and live with dignity. Obviously, what shocked him most was the letter of labour minister Bandaru Dattatreya that characterised his organisation — the Ambedkar Student Association (ASA) — as anti-national, casteist and extremist.
Rohith Vemula's memory will endure and damage the BJP
It was on the basis of this letter that the Ministry of Human Resource Development (MHRD) requested action against the five Dalit students who had allegedly organised a film show on the Muzaffarnagar communal riots and also held a discussion on Yakub Memon's hanging. Let us not forget it was just an academic discussion. Yet, members of the Akhil Bharatiya Vidyarthi Parishad (ABVP) first disrupted that meeting and then set the political machinery in motion alleging an attack by the Dalit students on one of their activists.
Pressure mounts on Modi government to sack Dattatreya for Rohith's suicide
Since the Bharatiya Janta Party (BJP) stormed into power in 2014, this was the fourth major assault on Dalit rights and dignity in the country. First, the ban on the Ambedkar-Periyar Study Circle of IIT Madras, then the burning alive of Dalit children in Haryana and, finally, general VK Singh allegedly referring to them as animals. Now, it is Rohith's death and Dattatreya and the HRD ministry's perceived involvement in it.
The fact that the University of Hyderabad administration took action after the MHRD letter has raised questions on the autonomy of central universities and universities in general.

Students shout slogans and burn an effigy of Union Minister Bandaru Dattatreya during a protest against the suicide of Rohith Vemula at Jantar Mantar. (Arun Sharma/ HT Photo Hindustan Times)

If vice-chancellors had a free hand to deal, without external pressure, with campus issues impartially, universities would not have become the den of suicides and violence that they are today. In the absence of such autonomy, there will be many more Rohiths.
Unfortunately, however, ever since the BJP came to power, political interference in learning institutions has seen an exponential increase. Earlier, universities were the privilege of the upper castes, but the reservation system has changed all that for the better. Non-political student organisations with modern ideologies today trump traditional, conservative groups like the ABVP in both talent and modern thinking — the creativity and dynamism of the ASA is just one example.
These small but effective student groups do not need guidance from a political party to take up contentious issues such as the beef ban or to write a new cultural idiom. Rohith was a by-product of this new cultural idiom. And, he gave up his life to spread the message that such discrimination and social boycott of Dalits/tribals can no longer be tolerated.
(Kancha Ilaiah is the author of 'Why I am Not a Hindu' and the director of Alberuni Centre for the study of social exclusion and Inclusive policy at the Maulana Azad National Urdu University, Hyderabad.)
(The views expressed in this article are personal.)
Prof. Kancha Ilaiah Director, Centre for the Study of Social Exclusion and Inclusive Policy Maulana Azad National Urdu University, Hyderabad Ph No.-040  23008335,  Mob-9704444692
--
Pl see my blogs;
http://ambedkaractions.blogspot.in/
http://palashscape.blogspot.in/
Feel free -- and I request you -- to forward this newsletter to your lists and friends!
Posted by Palash Biswas at 9:29 AM