Fwd: Army needs to be Indianised and Modernised 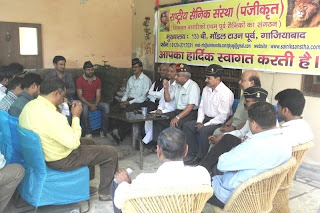 Army needs to be Indianised and Modernised

29th March 2012, HQ Rashtriya Sainik Sanstha, , the Patron of the Rashtriya Sainik Sanstha Maj Gen A J B Jaini brought out that we are continuing with the obsolete weapons and the equipment. Whenever, a natural or man made calamity occurs, the Army is called in and the situation comes under control ; and, as a consequence, the the country feels that the Army is up to date. In fact, off late, we have been doing only crisis management  and the sheer training and devotion to duty  of our soldiers has been coming to our rescue. Now there is a crying need to revamp our arsenal," said Gen Jaini". He defended the Chief of the Army Staff Gen V K Singh by saying that if there is some thing wrong, an Army Officer is supposed to bring it to the notice of his next superior; and, if the next superior does not take cognizance of it, he is supposed to bring it to the notice of the next Superior. This is what the General has exactly done.

The National President of the Rashtriya Sainik Sanstha Col Tejandra Pal Tyagi said that when 106 proposal of modernisation of the Army were pending what was the need to take back 3 thousand crore rupees from ten thousand crore ruppees of the annual budget. It is an indication that the ministry is not sensitive to the modernisation of the Army. Col Tyagi further added that if we had given a chance to Mahindra and Tata over and above the DRDO and the Hindustan Aeronautics, we would have dispensed with the purchase of the Tetra Trucks from the Czech Republic at double the price.

The National Adiser of the Rashtriya Sainik Sanstha Advocate Sheetla Shankar Vijay Mishra, the National Spokesman Maulana Abu Bakar Ashrafi, the National Secretary Fauzi Rajendra Baggasi, the Convenor of the Uttar Pradesh shri Sachin Yadav, Shri Ravi Panwar and very amny others  said in one voice that any action against the General would be counter productive and lower the morale of the fighting soldier whose confidence is wavering because 7000 soldiers have lost their lives without a war while the Kargil war was won with just 450 casualties.

The war wastage reserves (WWR) has declined to 4 days while it ought to have been for 21 days. We have noticed it in operation Parakram. If we do not take corrective action now, it will be too late.

Finally it was decided that if the need arise, the Rashrtriya Sainik Sanstha will take all those democratic actions which it can constitutionally take to raise voice against injustice to the SENAPATI since, security at Borders is too important an issue to be left only to the Government or the Military.

In this connection a memorandum has been given to the President of India.