Would we,the Indian People unite against this ethnic cleansing racial? RSS opts for Monopolistic aggression despite Obama plead for harmony! And sought to retain the "mistake" of omission of two vital words - "secular" and "socialist" - from the preamble to the Indian Constitution. Palash Biswas

Would we,the Indian People unite against this ethnic cleansing racial?

RSS opts for Monopolistic aggression despite Obama plead for harmony!

And sought to retain the "mistake" of omission of two vital words - "secular" and "socialist" - from the preamble to the Indian Constitution.

Would Indian People unite against this ethnic cleansing racial?

Finance Minister for Dow Chemicals have ensured to reopen US projects of nuclear reactors setting US Companies free from liabilities whatsoever.

Latest development after the so called Krishna sudama rappo seems to be making space for Four Billion US Dollars to be used to displace Indian citizens from their Jal Jangal Jameen Hills and Aasman,The Qayamat has been launched against us, the people of India as Industrial projects may get seven year green nod as Narendra Modi government looks to boost infra sector,as ET claims.

The constitution of India has to be killed to accomplish the agenda of Hindutva as well as economic reforms for racial ethnic cleansing!

CLSA managing director and strategy boss Christopher Wood expects the BJP government to offer fiscal stimulus in the next month's budget, and sees room for the central bank to cut interest rate by at least two percentage points over the next two years.

That is why RSS opts for Monopolistic aggression despite Obama plead for harmony!Thus,Political grapevine is rife with speculations about the Bharatiya Janata Party (BJP) forming alliance with the Peoples Democratic Party in Jammu and Kashmir later this month.The BJP and PDP have reached a broad understanding to form government in J&K, reports said on Wednesday.Reports indicate both the parties are working to evolve a seat sharing formula and are expected to reach a consensus soon.

Your Article 25 (of the Constitution) says that all people are equally entitled to freedom of conscience and the right freely to profess, practice and propagate religion," President Obama said.Mind you.Nevertheless,US announced $4 billion of new initiatives, trade missions: Obama announced $4 billion of new initiatives aimed at boosting trade and investment ties as well as jobs in India, and opened up a whole new source of financing for social development ventures ...and so on.

Minutes ahead of the meeting, HSBC chief Naina Lal Kidwai said that defence and renewable energy are big areas of opportunity. Nuclear sector will see private sector investment from US, she added.Noteworthy.

"We need 6 lakh crore investment in the renewable energy sector. US can provide tech and financing for the sector. I believe investment will come from US in the nuclear sector. Companies will wait for the details of the deal before making any investment, " she told a private news channel.

They overcame key disputes over a long-stalled civil-nuclear trade deal that hindered U.S. companies from investing in nuclear power plants in India for years. Obama announced on Monday $4 billion in U.S.-backed investments and loans to India!

Modi has vowed to revive stalled infrastructure projects, boost the manufacturing sector, cut red tape and encourage greater foreign investment, raising hopes that India and its economy are on the rebound. "There is a desire ... First proposed nearly a decade ago by the Indian National Congress–led government of former prime minister Manmohan Singh, the tax can be compared to the introduction of the income tax in the U.S. a century ago or the launch of the European Union's single market in the 1990s.

Thus,RSS is focused on the constitution while a Hindutva Governance in Kashmir seems to be certainty as RSS got it very clear that Kiran Bedi might not win against Kejriwal and Anna Hazare is also in blitz once again and this time against the Modi Government.No political compulsion pulls back RSS mind and heart and the armies of shafron clones have taken over the country.

Should we not stand together?

Against ethnic cleansing of Have nots across identities?

Against violation of civic and human rights?

Against the killing of rural India and the Green?

Against patriarchal religious conversion forcible of all Non Hindus?

Against inherent inequality and Injustice?

Against promoter builder raj all on name of development and Infra and false growth saga?

Against Bull Run against women countrywide?

Against killing of retailers and small,medium business?

Against the blind race,what Gandhi defined as PAGAL DAUD and for which Hindutva shot him dead and for which Nathuram Godse is reincarnated to invoke the gods of mass destruction?

Against the vaccination of Polonium 210 and radioactive disaster?

Against the continuous rape with the Nature?

It is quite in accordance with the Manusmriti Rule project of Hindu Imperialism as much as green clearance for billion billion dollars.Just see,Shiv Sena - a key constituent in the ruling National Democratic Alliance (NDA) - on Wednesday sought to retain the "mistake" of omission of two vital words - "secular" and "socialist" - from the preamble to the Indian Constitution.

"We welcome the exclusion of the words ('secular' and 'socialist') from the Republic Day advertisement. Though it might have been done inadvertently, it is like honouring the feelings of the people of India. If these words were deleted by mistake this time, they should be deleted from the Constitution permanently," Sena MP Sanjay Raut said.

"From the time they (the words) were included in the Constitution, it is being said that this country can never be secular. Balasaheb Thackeray and before him Veer Savarkar had been saying that India was divided on the lines of religion. Pakistan was created for Muslims, thus, what remains is a Hindu Rashtra," Mr. Raut said.

The minority community has been used only for political gains, while "Hindus are being continuously disrespected", he alleged.

"It is nowhere written in the Constitution that you mete out such treatment to Hindus and use Muslims to garner votes," he said.

"This mistake on the part of the government has happened only because destiny wants this to happen. Modi is the Prime Minister of India, and his thoughts on Hindutva are strong," the Sena leader said.\

On Tuesday, Congress leader Manish Tewari had attacked the Centre on the issue, claiming the government advertisement "deleted" the two words, which was only a prelude to their "substitution" with "communal" and "corporate".

Minister of State for I&B Rajyavardhan Rathore, however, was quick to dismiss the charge, saying his Ministry had only used an "original" picture of the preamble as it appeared before the Amendment, to "honour" the first preamble.

The Union Minister also claimed that the same picture had been used in an advertisement by the I&B Ministry in April 2014. Mr. Tewari had helmed the Ministry at that time.

The advertisement showed a picture of the preamble in the background with a quote from Prime Minister Narendra Modi and pictures of some citizens in the foreground.

Budget 2015: How reforms can help Modi's "Make in India" campaign 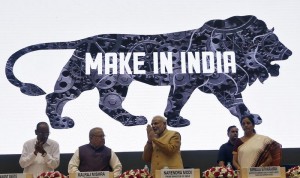 The government's "Make in India" initiative is being closely followed by Indian companies and foreign investors. A lot of hope rests on the BJP government's first full-year budget following its victory in last year's general election as the announcements made by Finance Minister Arun Jaitley will impact the investment cycle.

Some reforms that will help the "Make in India" campaign are:

A stable tax regime – Reforms proposed in the budget should be in line with the long-term vision for India. There should be no surprise addition of taxes or removal of tax holidays or deductions.

Clarity on tax law - Taxation in India is subject to multiple interpretations by the taxpayer and the tax department, and some of them need to be addressed at the earliest. For example, the rule on taxability of offshore transactions resulting in an indirect transfer of assets in India needs clarification. The government should come out with detailed guidelines on the methodology to compute the tax liability in India in case of such indirect transfers. The deferment of General Anti-Avoidance Rules till the tax regime stabilizes would be helpful.

Further, there are many industry-wide tax issues wherein tax officers in different jurisdictions have taken different positions. The government needs to set up a panel which would address specific industry issues, and the same should be made enforceable through the country.

Tax sops for investment in key sectors and reduction in the Minimum Alternate Tax (MAT) rate – Tax holidays for new manufacturing facilities set up across sectors would boost investment. Such new facilities should not be subject to taxes under the MAT regime. Also, the existing MAT rate should be reduced for units currently availing tax holidays.

Transparent and quick resolution of disputes – Increasing the scope and power of the Dispute Resolution Panel could help tackle the long list of unresolved litigation matters. Also, additional benches of the Authority of Advance Rulings (AAR) would strengthen the tax tribunal and result in speedy disposal of applications for advance rulings.

Transfer Pricing – Introduction of the concept of the rollback provisions for advance pricing agreements (APAs) in the 2014 budget was a welcome move. One expects the necessary legislative amendments being introduced in the upcoming budget to prescribe the extent and manner of the applicability of these provisions.

Going forward, the government should consider creating a financial zone to turn India into a manufacturing hub. Benefits such as lower taxes, no permanent establishment issue and non-applicability of transfer pricing provisions could be provided to businesses in this zone. They would act as enablers to convince firms to conduct their business without having to worry about the tax consequences on their overseas income in India.

Posted by Palash Biswas at 7:45 AM