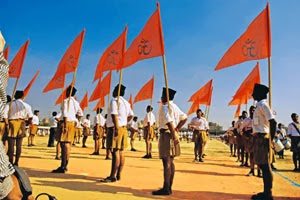 A great deal more of such unfinished business is in store in Modi-fied India.

Take that, you notorious pseudo-secular Naxalite documentary film director, Nakul Singh Sawhney. You thought only you could come up with phrases using this "baaqi" word? It was thanks to the grand success of goons sorry, swayamsevaks of the ABVP in stopping your Muzaffarnagar Baaqi hai (Muzaffarnagar eventually) midway through its screening in a Delhi college some weeks ago that you got far too much publicity with multiple protest screenings across India this week. Trust you've sent the ABVP a flower basket or rather a pushp gucch.

You were obviously borrowing from the shuddh Hindutva idea of unfinished business as regards not only Ayodhya in December 1992 where the Muslims were taught a lesson, and how, while the reputed "first BJP Prime Minister of India", PV Narasimha Rao, was enjoying beauty sleep in Delhi. Reclamation of Mathura and Agra and other holy places, which so happen to be for whatever reasons, holy for Hindus on the exact spots of some Muslim shrines, are also baaqi hein.

So, while ABVP stalwarts were no doubt preoccupied elsewhere, halls, auditoria, homes and makeshift outdoor venues in scores of cities across India screened and discussed Muzffarnagar Baaqi hai. But the good news is that West Bengal Police stopped its screening at theViswa Bharati University founded bythat anti-nationalism nutter Rabindranath Tagore, who among other stuff wrote a poem so many school kids get to learn by heart and which in English translation goes "Where the mind is without fear and the head is held high/Where knowledge is free/Where the world has not been broken up into fragments/By narrow domestic walls…" Tamil Nadu cops too did themselves proud likewise, bravely defying the mindless anti-caste precepts of Dravidian stalwarts EV Ramaswamy and CN Annadurai.

But back to a crucial matter facing the nation now, namely changing the names of some roads in parts of New Delhi. Urgent tasks (Apart, that is, from some more glorious rewriting of history ignoring that in the Mughal era Hindu and Muslim rulers had ministers, advisers, generals and so forth of faiths different from their own, that it was more opportunism than communalism at work, that Muslim rulers including Aurangzeb gave grants to temples for the purposes of winning friends and influencing people and that Hindu kings looted Hindu temples, (meaning follow the money or gold, silver etc.):

Nelson Mandela Marg: It ought to be renamed Nathuram Godse Marg. Who was Mandela? Ronald Reagan and Margaret Thatcher had deemed him a terrorist at the behest of the then South African regime which practiced "Apartheid", meaning separateness for peoples of different shades of colours of skin, and rightly so. After all, in our own country we have the Sangh Parivar and the Khap Panchayats saying not only should people from different castes and communities not be seen together but even people of certain gothras (whatever gothra means) ought to do as told, or else face the wrath of BJP, RSS, VHP, Shiv Sena, Bajrang Dal, Sri Rama Sene and other avatars of the Sangh parivar. That Mandela spent 27 years in prison struggling for a dispensation based on equality, non-discrimination and one person-one-vote ought to be overlooked. Why? Ask Hardik Patel. But why Nathuram Godse Marg? Have you been reading Indian newspapers in recent months, yo?

Archbishop Makarios Marg: Rename it Asaram Bapu Marg already. Who on earth was Makarios? Some Greek Orthodox priest who'd become president of a small island names Cyprus in the Mediterranean – never mind that he'd sought at various times to keep the Greek and Turkish parts of the island united. If only he'd had aNarendra Modi-like temperament and an able lieutenant in the form of an Amit Shah! But why Asaram Bapu Marg? Almost everyone who was susceptible to name Asaram Bapu in a court of law has shed their mortal coils. Journalists who name the worthy in print or online seem to fare better.

Copernicus Marg: Khakhi Knicker Marg, obvious choice given that our Fuehrer a k a Prime Minister Narendra Modi had, for long, worn the cheddi. Nicholas Copernicus was some latter day European science chap. Big deal. Everything worth discovering and inventing including the first and last law of Thermodynamics was done and dusted in vedic India. Following the illustrious example of the human resources minister MM Joshi in the previous NDA administration, incumbent Smriti Irani and team is endeavouring tobring back that golden age, despite some minor hiccups as in the FTII row.

Many more important name changes shall follow. Among them Safdar Hashmi Marg. That JNUite jholawala theatre person was liquidated by some brave volunteers from the Congress, proving the dictum: Congress-BJP, Twedledum-Tweedledee.

--
Pl see my blogs;
http://ambedkaractions.blogspot.in/
http://palashscape.blogspot.in/
Feel free -- and I request you -- to forward this newsletter to your lists and friends!
Posted by Palash Biswas at 7:30 AM