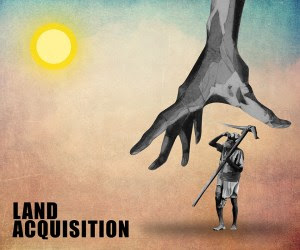 New Delhi, August 31 : The announcement by the Prime Minister Shri Narendra Modi in his mann kee baat that NDA government won't re-promulgate the land ordinance symbolises the victory of people's movements. Since the time government promulgated land ordinance in the last week of December 2014, farmers and peasants, forests dwellers, adivasis and numerous others have showed their steadfast opposition to the ordinance and demanded no less than repeal of the Ordinance. NAPM in its submission to the Joint Parliamentary Committee not only demanded the withdrawal of the Ordinance but also asked for addition of many other provisions to the 2013 Act, which will protect land rights and also address the woes and sufferings of the millions who have been displaced in the country in name of development and national interest, post independence.

On face of it, Bihar Elections are being said as the reason for this political decision; however, it is the massive opposition to the corporate designs of the Modi government by the people of this country, which has forced the government to reverse its decision. Political parties in opposition have played a crucial role inside the Parliament but ultimately it is the strength of the people's movements and farmers organisations on the ground which has forced the government to take back the ordinance.

Now that it is clearly proved that this government will go to any lengths in order to please its corporate masters, it remains the primary onus of people's movements to ensure a constant vigilance on attempts of endangering the rights and livelihoods of millions of India's agricultural workers and farmers. What remains to be seen is proper implementation of LARR 2013 at the state-level and not encourage them to bypass the Central Act and frame their own legislations as done by the State of Gujarat and Odisha. The Central government needs to ensure that the LARR 2013 is uniformly applied to states and the rights of the people are protected.

Even as we wait for the government to come up with the notification on application of 2013 Act to 13 central Acts, we also look forward to the report of the Join Parliamentary Committee, which debated and discussed the submissions made by different stakeholders, majority of which rejected the proposals of the government.

We are aware of the dangers posed by this government and are prepared to fight their nefarious designs to promote corporate loot of the natural resources. From the banks of Narmada we have called for National Bhu Adhikaar jan Vikas Yatra across the country and we will mobilise the masses to stand up for their rights as Narmada Bachao Andolan have done for last thirty years. We will not only let any forcible acquisition happen but also we will protest any attempt to forcibly displace people in name of public interest, which is most often private interest now, in rural or urban areas.

--
Pl see my blogs;
http://ambedkaractions.blogspot.in/
http://palashscape.blogspot.in/
Feel free -- and I request you -- to forward this newsletter to your lists and friends!
Posted by Palash Biswas at 12:32 PM