CHALO DELHI - 23rd February 2016
Justice for Rohith Vemula!
It has been a month since the institutional murder of Rohith Vemula, at the hands of BJP, ABVP and the HCU administration. Rohith was one of the five Dalit research scholars who was expelled from the hostel and faced social boycott for raising his voice against injustice perpetrated by the fascist and brahmanical forces in the country. Rohith's death sparked off hundreds of protests across the country in which people demanded justice for Rohith.
Despite the nationwide protests calling upon the government to arrest Rohith'smurderers, no action has been taken yet. Appa Rao Podile has not been sacked from the post of Vice-Chancellor. The Hyderabad High Court has put a stay order on the arrest of BJP MLC Ramachandra Rao and ABVP President Susheel Kumar. To cancel out the SC/ST Atrocities Act charges, the government is trying to prove that Rohith was not a Dalit.

Instead of taking demands raised by people's struggles seriously and acting on them, the RSS-led BJP government and student wing ABVP have branded the protestors as "anti-national." They are using the police as their instrument to spread terror among students and progressive forces as can be seen from the brutal police lathicharge on students, the police crackdown on university campuses and the arrest of students under draconian sedition law. Since these Hindutva Fascist forces cannot defeat progressive ideas through debate, they have raised their repressive weapons to curb the anti-caste and rational thoughts.
To carry forward the struggle for Justice for Rohith, a "CHALO DELHI" call has been declared by Joint action Committee for Social Justice, Hyderabad University for 23rd February, 2016. JAC, Delhi endorses the call and appeals to all people to join the struggle in Delhi. We, the students, workers, cultural activists, intellectuals, will rally in memory of Rohith's martyrdom, to fight for justice and freedom and to realize the India of our dreams.

Schedule for the protest:: 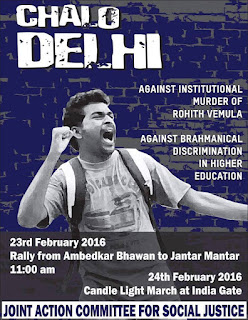