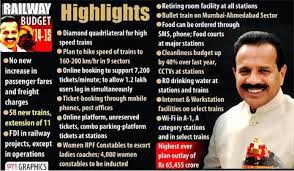 Press StatementThe Polit Bureau of the Communist Party of India (Marxist) has issued thefollowing statement:Despite delivering probably the longest railway budget speech the budgetaryproposals do not evoke any sense of well being in the Indian railways.Having hiked the passenger and freight charges several times prior to thebudget, it was only natural that further hikes in the budget were notannounced. The people of India were hoping that the budget will address theissue of expanding railway connectivity and take substantive measures forimproving passenger amenities. On both these counts the budget was verydisappointing.Most importantly, given the alarming rise in rail accidents it was hopedthat better measures for ensuring safety standards and financial allocationsfor enhancing safety measures would be taken up. Unfortunately, the budgetdoes not generate any greater confidence amongst the Indian people for whomthe railways constitute the most important link in the country'sconnectivity and therefore its unity.The most worrisome aspect of the budget concerns the financial health of therailways. Last year's performance has been much below the anticipatedearnings by the railways. Both freight and passenger earnings havesignificantly dropped and the gap between the budgetary estimates and therevised estimates of railway revenue is around a massive Rs. 17,000 crores.Further, the railways require around Rs. 32,000 crores to fulfill theobligations and recommendations of the 7th Pay Commission. This means thatthe railways are starting the financial year with a shortfall of nearly Rs.50,000 crores. This shortfall, the railway minister hopes, will be bridgedand surplus funds would be available for improving the railways through amassive dose of public-private partnership and the selling of the assetscurrently held by the Indian railways. The PPP model has globally proved tobe a failure in improving the railways all across the world. Selling assetsis like selling family silver to meet the day to day expenditure. This makesneither economic nor common sense.Consequently, the grandiose projects announced by the railway minister, willin all probability, remain on paper like most of the earlier announcementsmade during the recent years.Another disturbing aspect is that there is very little in the budget forprotecting, leave aside improving the welfare of the railway workers. Therailway minister praised the railway workers as the mainstay of the IndianRailways. This however appears mere lip service. Most of the services havealready been privatized and the remaining few are also to enter the PPPmode. The workers discharging these services do not have any protection andin some cases are not even paid the stipulated minimum wages. This does notaugur well for the future health of the Indian railways.The CPI(M) has all along demanded that the Indian Railways must maintain itsrole in providing better services to the people as its foremost objectiveand not be reduced into a mere accounting exercise balancing its revenuesand expenditures. We will have to wait for the general budget to see ifthere is any significant improvement in the budgetary support for therailways. Given the fiscal constraints and the overall economic slowdown inthe Indian economy under this BJP government this however will not beforthcoming.The consequent increased burdens on the people, the privatization of itsassets and the abdication of the responsibility towards its workforcetogether mounts a further attack on the Indian people, who are crying forrelief.(Hari Singh Kang)

--
Pl see my blogs;
http://ambedkaractions.blogspot.in/
http://palashscape.blogspot.in/
Feel free -- and I request you -- to forward this newsletter to your lists and friends!
Posted by Palash Biswas at 6:29 AM