Chhattisgarh is once again in the news for the systematic silencing of the State violence which is being unleashed upon the Adivasis. The latest one being attack on Soni Sori, one of the Adivasi women leaders and the systematic hounding of the lawyers and researchers who have been exposing the violence unleashed by the state on their very own people.

The immediate attacks on Soni as well as others and the aggressive stance come in a week prior to Narendra Modi's visit to Chhattisgarh to inaugurate the Rurban mission, aimed at improving basic infrastructure, at Dongargarh. Various voices from the ground especially from the Adivasis have been saying that the road construction activities dotted with security force camps is all in the name of development. Bringing Schools and Hospitals are never in the agenda. This definitely is a part of the larger game plan of selling off the country to the corporates by evicting the Adivasis by installing military camps.
This is definitely to clean up the area and by just scanning through the kind of violence reported in the last six months from Bastar, the instances are a prelude to this. Condemning this violent attack on the Adivasis and the other groups which are providing legal help to the victims, a protest demonstration organised by concerned individuals, movements and organizations will be held on 22nd February 2016 in front of the Chhattisgarh Bhavan, 7 Sardar Patel Marg, Chanakyapuri, New Delhi at 3.00pm.

Lets gather there and demand justice. 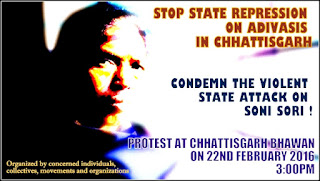