BUSINESS: 2G SCAM Conference Call, Was It? Raja’s finger-pointing has been countered by vehement denials. The plot thickens. ARINDAM MUKHERJEE 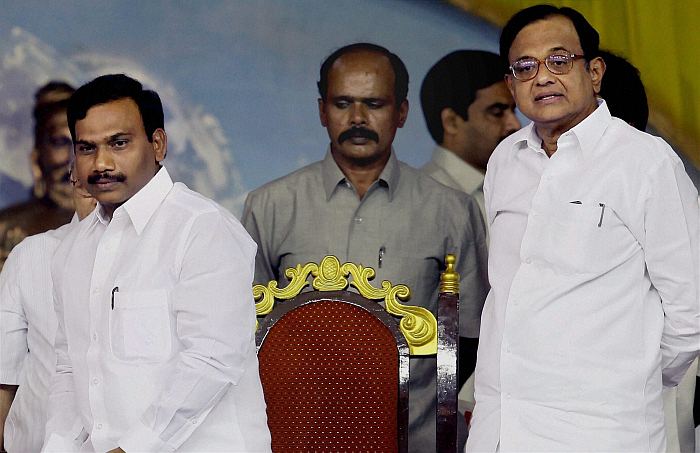 Even battle-scarred veterans embroiled in the 2G spectrum scam voiced their grudging approval of the slugfest started by former telecom minister Andimuthu Raja in the special CBI court presiding over India's biggest scam. By attempting to pull Prime Minister Manmohan Singh and home minister (and former FM) P. Chidambaram into the 2G mess, Raja—who has been keeping rather quiet for nearly six months in Tihar Jail—has come out with an incisive, politically explosive legal strategy (he is, after all, a lawyer by training). Fittingly, it is the UPA government's lawyer-politicians—Chidambaram and Kapil Sibal—who now have some deft manoeuvering to do in the legal tussle to come.

For now, the UPA's nervousness is palpable. It is painting Raja's deposition as a sinking man's desperate attempt to stay afloat and arguing that his submissions cannot legally be construed as evidence. That's true enough. But the tone of their dismissals indicates that he has touched a raw nerve. Fixing culpability on Raja, while immunising themselves, will be a precarious tightrope-walk.

The UPA has argued that the telecom policies followed by Raja were kosher, with the only criminality being in their implementation. Dividing those two elements into watertight compartments won't be easy. Raja's riposte has only further fuelled the perception that the CBI is shielding several big fish who may have, directly or indirectly, played a role in the multi-crore scandal. By mentioning at least three big names—the PM, the former FM and Tata Teleservices—Raja is sending out a not-so-subtle message: if I'm going down, so should you. 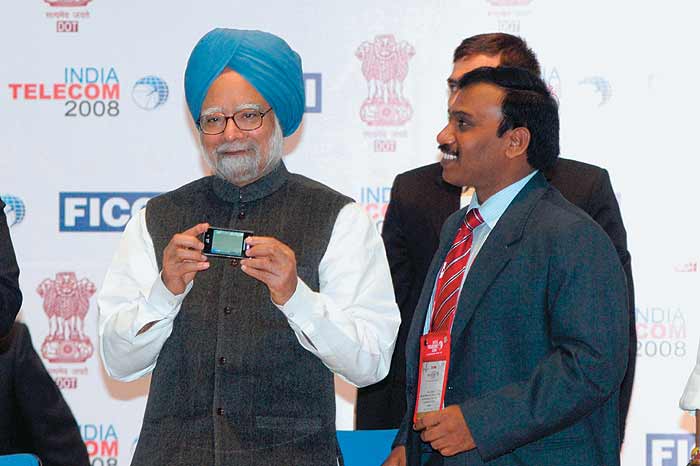 Hands on? The PM at a telecom function. (Photograph by Jitender Gupta)

The tainted minister said that the PM and the former FM were in the know about—and fine with—permitting new licencees Swan Telecom and Unitech Wireless to sell equity to foreign companies at huge profits a few months after receiving their telecom licences in 2008. Raja's argument: the decision to clear the licences and allow the sale of equity in the two companies was not his alone, but rather a collective determination made at the highest level of government. He has contended that Chidambaram, as FM, had cleared the equity sale by the two companies—an allegation denied by Chidambaram who counters that he had, instead, simply sought clarification on whether the two companies had sold equity by disinvestment or by issuing fresh equity.

Not many are buying this argument. Says lawyer Prashant Bhushan, whose organisation, Centre for Public Interest Litigation, has been at the centre of the court case against the 2G scam: "The distinction being made by Chidambaram is bogus. We have to see what he actually approved in this case." The issue of fresh equity was permissible under law then (a lock-in period of three years was inserted into the agreement in July 2009, many months after the Swan and Unitech Wireless deals had been sealed).

The contentious bit is that despite the legal validity, the PM and FM could have surely stopped (or even delayed) the process pending an investigation into what was already being termed a scam. What will make it more inconvenient for the PM are file notings by his then principal secretary T.K.A. Nair in January 2008, which stated that the PM "does not want a formal communication and wants the PMO to be at arm's length". Even the Public Accounts Committee (PAC) report had brought this up.

While the CBI has already given the PM a clean chit, opposition parties will undoubtedly use the findings to further target Manmohan. Says Ravi Shankar Prasad, spokesperson for the BJP, which is already renewing clamour for the PM and FM's resignation: "Those who participated in the decision-making process are now trying to distance themselves from the decisions made by Raja. The PM is the head of the government and can call for any file to be reviewed."

Chidambaram is under the harsher spotlight as his former ministry was involved in the approval process before licences were sold in 2008, a point the PM has made on a couple of occasions. Thus far, Chidambaram has managed to shield himself from the case—the BJP, in particular, has been gunning for his inclusion for some time—but it remains to be seen for how long. Raja's deposition seeking to bind Chidambaram to stand witness has been pooh-poohed by many experts, but not discounted.

Perhaps, more vulnerable is attorney general G.E. Vahanvati. Raja has argued that as Vahanvati (then the solicitor general) cleared his policies and gave them a legal stamp, it was unfair that he (Raja) alone was being held responsible for the telecom mess. Though Vahanvati has refuted the allegations, his role in approving the Swan case, for instance, could come under scrutiny.

Significantly, Raja has also questioned why only Swan and Unitech Wireless were being grilled for selling their equity to foreign companies, and said Tata Teleservices should be in the net too—"This is my challenge (to the CBI)," Raja said in court. After getting a dual-technology licence in October 2007, Tata Teleservices sold a 26 per cent stake to Japanese telecom giant NTT Docomo in November 2008 for about Rs 13,000 crore.

The dual-technology issue, which also concerns R-Com and Shyam Tele, is under scrutiny. While the CBI went out of its way to explain how the Tatas were victims of Raja's policies, in reality, the company was allocated spectrum in all the circles applied for—barring Delhi. Raja's argument may ring true though as Tata Teleservices, which operated CDMA services for several years, sold its stake months after coming into the GSM arena.

Raja's co-accused have also begun to adopt the legal stratagem he's employed. Siddharth Behura, the telecom secretary during Raja's tenure, has pointed to the then finance secretary (and current RBI governor), Duvvuri Subbarao, and other top bureaucrats. Even if Raja's current tactic bears fruit, it's unlikely that it will save him. The charges against him are numerous and varied, including selling spectrum for a song, changing application dates and toying with the definition of the "first come first serve" principle, among others.

While Raja is no saint, his deposition has raised valid issues: most crucially, the question of the collective responsibility borne by the UPA cabinet (and by the PM) and the role of key ministries. This has been rich fodder for politics. Expect that to intensify on the eve of Parliament's monsoon session, as the inherent loopholes in the UPA's legal strategy become exposed yet again.

Posted by Palash Biswas at 7:16 AM