US House set for key debt vote on Republican bill 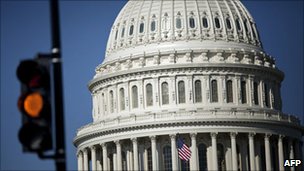 Washington hit its debt ceiling in May, but has used accounting adjustments to continue operating
Continue reading the main story

Mr Boehner told dissenting colleagues on Wednesday: "Get your ass in line."

The US Treasury has warned the government will run out of money to pay all its bills unless a $14.3tn borrowing limit is increased by next Tuesday. 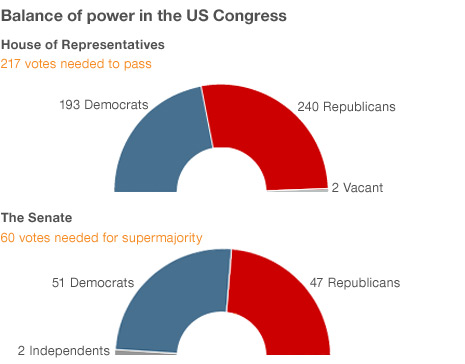 Mr Boehner's plan would trim $917bn from the US budget deficit over 10 years and raise the debt limit by up to $900bn.

President Barack Obama supports another plan by top Senate Democrat Harry Reid, which would cut $2.2tn from deficits, and raise the debt ceiling by $2.7tn.

But that is thought unlikely in its current form to pass the Republican-controlled House.

Both Republican and Democratic plans underwent revisions on Wednesday after congressional budget analysts said the savings advertised by each one had been overstated.

But Mr Boehner's approach would force another debt-limit showdown during next year's presidential campaign, something Mr Obama has fiercely opposed.

Senate Majority Leader Reid's plan would see the ceiling lifted until after the November 2012 elections.

Analysts say success in the House for the Boehner plan would lend it legitimacy, but it would not be able to pass in the Senate.

All the great, historic compromises [Mr Obama] is talking about failed at the first hurdle. And the second and third. They took time. Years. Decades. This deadline is just days away"

The most probable scenario is thought to be a frantic last-minute hunt for a compromise and final, razor's-edge votes in both chambers, with the high-stakes game of legislative brinkmanship expected to go down to the wire all weekend.

Mr Reid hinted of a compromise as he told reporters on Wednesday: "Magic things can happen here in Congress in a very short period of time under the right circumstances."

Washington hit its debt ceiling in May, but has used accounting adjustments, as well as higher-than-expected tax receipts, to continue operating.

On Wednesday, Mr Boehner and his lieutenants met restive members of the House rank and file - including some who oppose lifting the debt limit under any circumstances - to persuade them to back his plan.

In a new twist that analysts say illustrates the discord among the Republican party, Republican Senator John McCain, the party's 2008 presidential nominee, took to the Senate floor to criticise some freshman House Republicans' stance on the debt issue as "foolish" and "bizarro".

In recent decades, the US Congress has increased the government's borrowing authority dozens of times as a matter of routine, but this year newly elected conservative Republicans have demanded steep cuts to the budget deficit as the price of an increase.

More on This Story

From other news sites

All posts are pre-moderated and must obey the house rules.

Jump to comments pagination
Posted by Palash Biswas at 8:01 AM