DIPLOMACY: INDIA-US Stars Of The Same Stripes A Janus-faced Pakistan, and a swaggering China, give India-US strategic relations a tougher bind PRANAY SHARMA 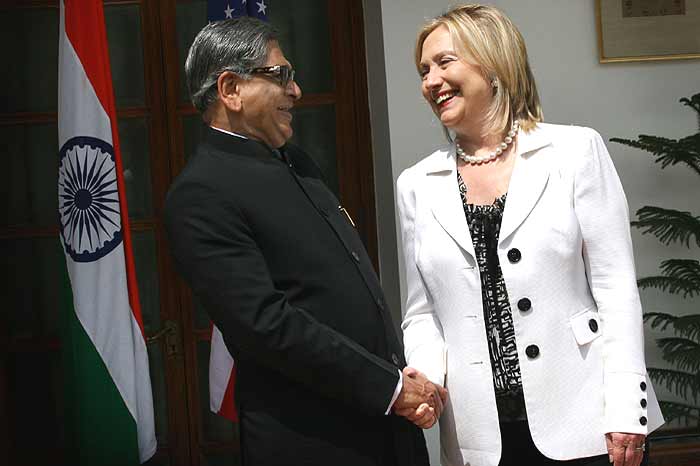 Why America, India Need Each Other

As United States secretary of state Hillary Clinton sat across the table from Indian foreign minister S.M. Krishna on the morning of July 19, among the first things she said was to explain why she loved coming to India. She said India was one place where she felt "energised" by new ideas and skilful analysis of Indians on critical global issues. She also voiced her sadness at the imminent departure of India's ambassador in Washington, Meera Shankar, who's due to retire in July-end. Then, promptly turning to foreign secretary Nirupama Rao, due to take over from Shankar, Hillary said, "I am happy to see a woman replace another woman."

The Clintons' spontaneous comportment here has always been appreciated in New Delhi; it counts Hillary among its strongest American supporters and credits her for maintaining Indo-US relations at the heights it commands now. They trace it to before her becoming secretary of state, first as president Bill Clinton's wife and then as a senator during the George W. Bush presidency. "Her natural affinity for India comes across so vividly that it is difficult not to take note of it," says Nirupama Rao, adding that the 'Strategic Partnership' talks of July 19 were held in an "open, cordial and constructive" atmosphere.

Critics are liable to dismiss these claims as hyperbole so typical of diplomats. After all, haven't there been differences of opinion, and ensuing heartburn, between India and the US on a range of issues, from civil nuclear liability to membership of the Nuclear Suppliers Group (NSG), from purchase of the multi-role combat aircraft to Washington's decision to talk to the Taliban? An Indian diplomat admits, "There was indeed a growing perception in both countries that our bilateral relations were drifting." To allay this perception, New Delhi catalogued issues on which there have been significant cooperation under the Obama administration. It's quite an impressive list, by all accounts. Further, India and the US are also engaged in a series of dialogues involving West Asia, Central Asia, Afghanistan, Pakistan, China and the Indian Ocean region and beyond. "If one looks at the table, one knows we are engaged with each other on almost all areas that are of concern to us," adds the diplomat.

You might wonder why the world's only superpower would want to talk to India on, say, Central Asia and China. It could very well be argued that Washington has to woo India since there is no other country in Asia—where America's engagement has been growing in its demi-official role as the engine for global economic growth—which fulfils the criteria for becoming a strategic partner. With its growing economic and military might, pluralistic, inclusive and vibrant democracy and a large knowledge pool, India is arguably America's best bet to ensure that Asia is not dominated by a single power—China. Both India and the US accept China's rise as a reality, but neither is sure whether its assertion in the future will be benevolent.

A malevolent power dictating terms isn't acceptable to New Delhi, for the sea lanes in the neighbourhood are vital to India's economic growth. Though India and the US are not planning to collude against China, they simultaneously want to put in place a countervailing strategy against the possibility of China's overwhelming dominance. The forthcoming India-US-Japan dialogue is part of this strategy, as is Indian President Pratibha Patil's visit next week to South Korea and Mongolia, which has not had a presidential visit for 23 years. An MEA official argues, "It's not a naval armada that we are trying to form with others against China. But if China can play a significant role in South Asia, what stops us from doing the same in areas closer to the Chinese?" Indian officials argue that a stronger New Delhi-Washington relationship also propels China to foster better ties with India. They say this strategy of warming up to America not only addresses New Delhi's anxiety about Beijing, but also enables India to access technology and knowledge to fuel its growth.

Yet many wonder if India and the US do share a common interest in Asia. Former foreign secretary Kanwal Sibal says, "In West Asia, America's role is contested (by the people there), while India's isn't. So where is the common ground between us?" Sibal cites examples to bolster his argument—the US wants India, against its own inclination, to support the West's position on Libya. Again, India's nod to America's reconciliation process with the Taliban, says Sibal, is a concession Washington has wrested from New Delhi.

MEA officials, however, say their reconciliation with America's Afghan policy is pragmatic, unable as they would have been to influence Kabul's future. They also say Washington has accommodated India. For one, it wants New Delhi to play a bigger role in Afghanistan, a shift from its earlier reluctance to allow India room there, in an attempt to appease Pakistan. And though New Delhi accepts that peace in Afghanistan isn't possible without Islamabad playing a role, the US has accepted India's position that Pakistan shouldn't have veto rights in Kabul. Again, the US has been more vociferous than even India in criticising Pakistan's duplicitous role on the anti-terror campaign.

This isn't to say that there are no differences between India and the US. One of these is over the Nuclear Liability Act, which makes suppliers of nuclear equipment financially liable for an accident. Another provision allows victims of a nuclear accident to file tort claims, thereby ballooning the nuclear supplier's total liability. Since the nuclear companies in the US are not fully or partially state-owned, they would be disadvantaged in competing with those of countries like Russia or France.

Another contentious issue is the recent NSG decision to deny the enrichment and processing (ENR) technology to those countries which haven't signed the Nuclear Non-Proliferation Treaty (NPT). This has provoked some critics to say that the US has reneged on its promise of sharing ENR technology. Yet, a close reading of the Indo-US nuclear deal shows that this promise was made subject to amendments to the stringent provisions of US domestic laws, which were changed only once to accommodate Japan. A few fear that the US would exploit liability and ENR issues to deny India entry into the NSG. Hillary, sources say, however reiterated that changes in the NSG rules wouldn't deprive India of the right to acquire this technology from other countries, nor would India be denied entry into the NSG.

Hillary was also candid in stating that India must ratify the Convention on Supplementary Compensation, which is an international agreement determining the liability of a nuclear supplier, by 2011-end. Officials, however, say India had given this commitment two years ago. She also wanted India to consult the International Atomic Energy Agency (IAEA) about the contentious provisions of the Nuclear Liability Act. But there's very little possibility of India diluting the provisions on compensation. As BJP leader Yashwant Sinha told Outlook, "There should no violation of the letter and spirit of the Liabilities Act as and when the government turns it into a law."

Indian officials admit to their discomfort at the time Hillary raised the Liability Act. But then the Americans too were squirming in their seats as soon as the Indians talked about the visa regime that discriminates against Indian IT companies. In it was a subtle lesson for the Americans—a democratic country not only has to take into account the popular sentiment, but can't override its elected bodies. Says a diplomat, "When push comes to shove, US companies may find it difficult to move away from deals worth billions in the nuclear field just because they don't like certain provisions in our Liabilities Act." Ultimately, such differences will not lessen India's growing importance in America's global vision of the future.

Translate
DAILY MAIL
Posted by Palash Biswas at 8:11 AM