RAILWAYS The Great Railway Bazaar Is the lifeline of the nation—the Indian Railways—being put on the block, bit by bit? LOLA NAYAR , AMBA BATRA BAKSHI 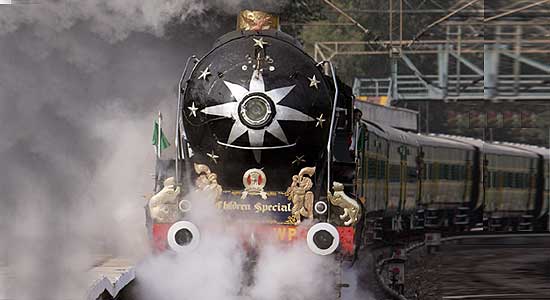 RAILWAYS
The Great Railway Bazaar
Is the lifeline of the nation—the Indian Railways—being put on the block, bit by bit?
LOLA NAYAR , AMBA BATRA BAKSHI
http://www.outlookindia.com/article.aspx?280344

When Dinesh Trivedi resigned as the Union railway minister last week, none of the railway trade unions was surprised. They had known for over a month that something like this would happen. And, Trivedi himself had told them as much. At a meeting with trade unions in the first week of February, the minister had spelt out plans to raise passenger fares to help the railways garner more revenues and held out the bait of better facilities and perks to the employees for their support. Union leaders recall that Trivedi candidly admitted that his move would draw flak from the Trinamool Congress, TMC, and that he may have to quit.

What is adding an edge to all the conspiracy theories around Trivedi's harakiri—and the subsequent rollback of fares by new minister Mukul Roy—is the way key reforms have been slipped into the Railway Budget. Was the brouhaha around the fare hike a move to deflect attention from the real (some would say even radical) reforms? Like Trivedi's decision to study the setting up of a Rail Tariff Regulatory Authority (a proposal that's been mooted by Planning Commission deputy chairman Montek Singh Ahluwalia for several years) and introducing a fuel-adjusted charge for rationalising fares.

Tongues are wagging that Trivedi's railway budget was virtually dictated by Montek and Sam Pitroda. Trivedi, in fact, seems to have followed in letter and spirit the contents of the missive Montek sent him in August 2011 on the 'Issues Regarding Indian Railways'.

Click the above image to enlarge and here for the full text of plan panel chief
Montek Singh Ahluwalia's letter of August 9, 2011

It's also the first time a railway minister has acted with such alacrity on accepting an expert panel's proposal on modernisation of the railways. It's no secret that panel chairman Sam Pitroda is a close friend of Trivedi's and had even stayed at the former's house during the preparation of the report.

All this matters because Trivedi is the first railway minister to have leaned strongly towards the Planning Commission's stand on increasing the quotient of privatisation in the railways, a mammoth organisation that has the third-largest rail network in the world and is the largest employer in the country. By doing so, Trivedi exposed the increasing differences between the Planning Commission and the railway establishment on what the future course for the railways should be. It's actually an all-out war between two schools of thought. "The lobby for privatising certain sections of the railways has been very strong and has the government's backing," says a former senior railway board official, adding in the same breath, "but the railways can be completely self-reliant in the next 3-4 years with better management."

In fact, evidence shows that slowly, through special purpose vehicles and manufacturing joint ventures catering to only one client (the railways), new corporate entities are being created to manage everything from catering, housekeeping, to maintenance of trains and stations. Organisationally, the railways are being restructured on the lines of businesses—logistics was the latest one to be opened up. They will be run as profit centres—track maintenance and expansion is being considered, for instance. There's more to come: a massive Rs 99,000 crore of public-private partnerships (PPPs) are being carved out. Lucrative parts of a large land bank are being developed. Private hotels are coming up on leased land, and in some cases the management control is being handed over (like in Rail Yatri Nivas in Delhi).

To be sure, operationally, the railways are not being privatised. Control still vests with the government in core operations. There's also no denying that the railways needs help—it's in a sorry state thanks to ageing infrastructure, huge pressure on lines and mounting losses on account of a gradual shift of freight to road. And some outsourcing is required. But experts are raising concerns, warning that (if unchecked) the railways are being set up for plunder like Air India, leaving a rotten core. "It's like walking down a road and falling into the ditch, despite knowing where the ditch is," says another former member of the railway board, pointing to the poor experience of PPPs in power and other sectors.

Experts point out that huge concessions are expected to be granted to attract private investments. Currently, there are over a dozen departments handling various PPP projects. The proposal to have a dedicated railway board member looking at PPPs has been shot down by the new minister. This is unfortunate as there is no transparency or accountability in how these projects are being formulated or operated. All this should set alarm bells ringing.

Apart from genuine fears about corruption and tweaking of rules, there is also the concern that millions of consumers who rely on the railways could end up suffering and paying higher tariffs. The experience with toll roads bears this out. Similarly, lacunae in the agreements relating to power projects (like the Dabhol power project or the privatisation of the Delhi power utility) or airports (like Delhi's modern IGIA) ended up with the consumer paying a high price. There's also the metro rail link between New Delhi station and IGIA—made under private investment, it's making losses after having failed to garner the requisite traffic. Or the Hyderabad Metro. "Once you go the PPP way, the investors will cherry-pick, charge high tariff and pave the way for privatisation," fears Prasenjit Bose of the CPI(M).

The controversies have already begun. The basic flaw with the railways following the PPP mode to augment resources for infrastructure development is the lack of a sound model. Currently, the railway ministry is relooking at the proposal for setting up two new locomotive factories in Bihar. During his tenure as railway minister in 1998-99, Nitish Kumar had ordered a feasibility study on increasing locomotive manufacturing capacity in the country for domestic use and exports. "But it was only in 2009 that Laloo Prasad Yadav pushed ahead with the idea of setting up more loco manufacturing units through the PPP mode in Bihar," says a former railway board member.

But despite two cabinet approvals, the process of awarding the contract has been put on indefinite hold after differences cropped up between members of the railway board and the Planning Commission. In fact, even within the Planning Commission, questions have been raised about changing of contract terms to benefit General Electric. Such changes were to be done only by an inter-ministerial group. As charges of tweaking terms of contracts fly against Planning Commission advisor Gajendra Haldea, he defends himself, saying, "The bid document and bid process for electrical locos was completely transparent, fair and competitive."

Associated with the process of evolving the PPP structure, Haldea states that "any suggestion that I made any changes at my level in the contract is complete hogwash". He points out that there are only four manufacturers of the kind of locos being procured and all of them are competing for the contracts. Highly-placed sources in the know point out that the freeze in decision-making on the Bihar and other PPP projects is mainly due to Mamata Banerjee's unease with what's happening. That is why a second committee of experts was set up to study the implications of various PPP proposals to safeguard the railways' interest.

Not all PPPs have gone wrong, avers former railway board chairman Vivek Sahai, who says experiments like the wagon investment scheme have proved to be a win-win situation for both the railways and the private party. However, as the Bihar PPPs show, for setting up manufacturing units (like the two proposed locomotive plants) it is still uncharted territory. Many contracts are coming under scrutiny for questionable clauses to suit investors.

Then, there's the touchy—and relevant—issue of the railways' massive land bank. The Rail Land Development Authority (RLDA) has found 52 sites that are commercially viable with the potential of earning Rs 5,500 crore. Currently, five sites are in the process of being leased out—for a 30-90-year period—and 10 more are in the works. The largest site is in Sarai Rohilla in Delhi, where Parsvnath Developers will rebuild 750 railway staff quarters. In lieu, it will be allowed to build luxury residential flats in the remaining area. Several questions have been raised about this Rs 1,651-crore deal, including why and how prime railway land was allowed to go out of hand in the guise of a 90-year lease.

"We have received the first instalment from the developers and now the process of incorporating an spv is on," says Rajesh Agarwal, general manager, projects, RLDA. But the project—like many others in the pipeline—will have to wait for the new land policy being drafted as it will spell out the terms of lease to protect government land from being surreptitiously sold.

The proposal to put in place a tariff regulator has also been criticised. In 2005, in a written response to the Rajya Sabha, then minister of state for railways R. Velu said: "The government decided to set up a Rail Tariff Regulatory Authority to fix rail tariffs. However, the ministry of railways is of the view that such an authority is not required and has approached the cabinet for reconsideration of its decision." Explaining the rationale behind the opposition, Sahai says, "If we are a monopoly and are keeping the lowest fare in the world, where is the need for a regulatory authority?" Such a body, he stresses, is more useful in the case of highways and airlines where there is more than one player in the field. Seeking further debate on this, former railway board chairman S.S. Khurana adds, "If the tariff authority is set up, the fares will become cost-based. The cause of the common man will be overlooked in the process."

While the railways outsources and privatises more and more services, a large section is questioning the need for this. "The government has no right to say there is no money," says Shanti Narain, former member (traffic), railway board. "Railways is the most efficient in terms of energy, land use, environment and safety." The government seems to have a different take. This view got further entrenched with Trivedi echoing the Planning Commission's stand on increasing privatisation.

Many feel this could spell disaster for India given the large social objective of the railways. "The privatisation experience of some other countries with a much smaller rail network—such as the UK—has also not been encouraging," says S.N. Mathur, former MD, Indian Railways Finance Corporation. Optimism persists among railwaymen that their organisation will not be privatised—certainly not the operational part which requires considerable expertise. That remains to be seen. But there's no denying a sneaking feeling that the railways has been run to the ground by successive rail ministers. Remember Laloo's famous "turnaround"? Such mismanagement may either see greater privatisation or a decline in the railways' fortunes. In the worst-case scenario, we could have both.

Translate
Posted by Palash Biswas at 7:51 AM