RSS TAKEOVER IN JUST 15 MONTHS, BHAGWAT IN COMMAND: "THE FUTURE IS OURS" 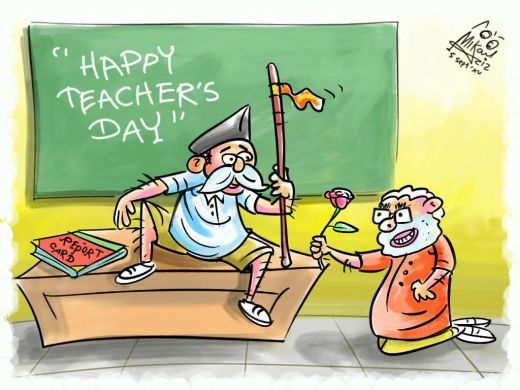 NEW DELHI: Prime Minister Narendra Modi, faced with three major agitations of farmers, ex-servicemen and now with the workers, has prostrated the government of India before the Rashtriya Swayamsevak Sangh in just 15 months of coming to power.

As a gesture the RSS backed trade union Bharatiya Mazdoor Sanghpulled out of the trade union agitation on the eve of the three day conclave attended by the PM on the last day, senior ministers in close confabulation with the mentor organisation, and Bharatiya Janata Party president Amit Shah.

There has been some friction between PM Modi and the RSS that has been resolved now by the latter flexing its muscles, and ensuring its say over governance at the meeting. PM Modi endorsed this, along with all senior Ministers of his government. As did the BJP in what is perhaps the first instance in the history of India where the RSS has openly discarded the fig leaf of being just a social organisation, and assumed political charge of internal and foreign policy.

Ministers of Finance, Home, External Affairs, Defence amongst others attended the meeting where issues of governance were raised, analysed and criticised with RSS leaders suggesting a course correction on matters of policy and implementation.

There was tension between the RSS and PM Modi soon after he came to power, arising from the highly personalised nature of his rise. There were sufficient leaks from Nagpur at the time to sections of the media to suggest that all were in the RSS were not happy with this phenomenon and efforts were on to curb this trend. As a result when he insisted on the appointment of his Man Friday Amit Shah as the BJP President there was some resistance from the RSS that was wary of this consolidation. However, the Prime Minister had his way as he was a riding a popularity wave that the RSS did not want to buck. Shah along the way, mended fences with the RSS as he was more comfortable working with the cadres than with the official BJP in most of the state.

Relations between Shah and the RSS are clearly cosy now, as in the briefing after the three day conclave the RSS spokesperson said that Shah had assured them that the One Rank One Pension scheme would be implemented. Strangely enough there was no mention by the RSS of the Defence Minister Manohar Parrikar insofar as this specific assurance was concerned. Instead RSS joint general secretary Dattatreya Hosabale told reporters, that Shah "will resolve this issue soon."

There were three major issues with which the RSS had differences with the government, developed of course, after strong adverse reaction from the ground. Over the months PM Modi came under flak on matters of policy, starting with the Land Acquisition Bill. RSS kisan organisations eventually joined the stir realising that this constituency was slipping away. Pressure thus doubled on the government to back off from the controversial anti-farmer amendments. The Prime MInister was adamant not to do so initially but has given in now as he found himself isolated within without the RSS support, and divisions within the BJP surfacing.

The second issue has been One Rank One Pension with ex-servicemen seen as a major BJP/RSS constituency. The anger over the delay has allowed the RSS to pressure the government on this, even as it supported the military veterans through the struggle. The government has made it clear at the conclave that this will be worked out to the satisfaction of all.

The third issue that erupted for just a day, but has the potential of turning into a major protest soon, was the trade union agitation. Interestingly BMS has been agitating with the other trade unions against the government on issues, and the impact would have been even more severe if it had remained part of the nationwide bandh two days ago. It pulled out as a gesture after the government virtually agreed to present itself on trial at the RSS conclave, address their concerns and doubts, and agree to be mentored for a course correction.

All this has happened with the RSS now claiming to be "satisfied" with the government response. Although, as its spokesperson said, not a 100 per cent but the government was now "moving in the right direction."

A fourth point of difference has been economic issues with the RSS affiliates opposed to economic reforms as being pursued by the government. It is not clear to what extent these differences have been ironed out with Hosabale saying, "economic models need to be developed on the basis of Bharatiya chintan and vichar. Western models have failed."The Land Acquisition Bill amendments of course appear to have been dropped by the government, a move that will not go down well with the corporates looking for positive signals from the "Make in India" government.

Jaitley was questioned by delegates, including many from the Swadeshi Jagran Manch, on Foreign Direct Investment that the latter has been opposed to.

The government was questioned on security issues, internal and external. The RSS now wants it to to talk to Pakistan as part of its 'akhand bharat' ideology. As Hosabale said at the briefing, "India is a member of SAARC. India has good relations with neighbouring countries—Pakistan and Bangladesh were our body parts earlier. People living in these countries are our family." He said it was necessary to ignore irritants in bilateral relations, and India being the bigger brother should take the onus of strengthening ties with these countries that are like siblings. This is an interesting shift in RSS position but it remains to be seen how it actually plays out on the ground.

The RSS mouthpiece carries a vicious article by extremist right winger Pravin Togadia on the census where he advocates stopping the Muslim growth rate in nasty words. Hosabale said that the RSS has prepared a report and this will be discussed at a meeting soon.

The RSS agenda of polarising communities, appointing key persons in cultural and educational institutions has gathered steam and will be further accelerated according to reports. The RSS will be giving in inputs for the New Education Policy being finalised by the HRD Ministry. It will also respond to PM Modi's direct appeal to help fight corruption at all levels.

The effort was to end friction, and to do so by accepting RSS mentoring and advice.

Finally RSS chief Mohan Bhagwat spoke claiming the future. "Bhawashiya hamara hai. We will win if we are united, we will lose if we fight each other," he said.

--
Pl see my blogs;
http://ambedkaractions.blogspot.in/
http://palashscape.blogspot.in/
Feel free -- and I request you -- to forward this newsletter to your lists and friends!
Posted by Palash Biswas at 8:02 AM