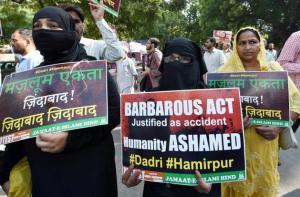 Bharatiya Muslim MahilaAndolan [BMMA] along with Bharat BachaoAndolan, Police Reforms Watch, VidyarthiBharti, Phule-AmbedkarManch and JagrutKamgaarManch is organized a press conference to protest against the increasing low scale harassment of Muslim youth in Mumbai and the increasing intolerance towards theMuslim community.

1. Danish Shaikh and AsifShaikh were picked up by the Bandra west station and thrashed and were told to go to Pakistan
2. Two Muslim youth were picked up from their from their karkhana at Indira Nagar pipeline, Bandra east for 'verification' with no reason given for taking them to Nirmalnagar police station.
3. The Mohalla Committee Movement Trust in its last meeting refused to take any complaints against the police saying that anyone wanting to complain must not come for the meeting at all.
In addition there are instances of growing intolerance towards the Muslim community and towards minorities
1. One Muslim woman was not allowed to enter the Navratricelebration at the Kherwadi Housing Board.
2. 6000 names from Behrampada and 370 names from Bharatnagar voters list has been removed.
3. Small children were denied entry into the Oberoi Mall in Goregoaneast and Phoenix Mall in Kurla west on the occasion of Eid-uz-Zuha citing discomfort from other customers

These and many more instances of intolerance and hatred towards the community is being seen.
To condemn the rising hatred and animosity, Bharatiya Muslim Mahila Andolan [BMMA] along with Bharat BachaoAndolan, Police Reforms Watch, Vidyarthi Bharti, Phule-Ambedkar Manch and Jagrut Kamgaar Manch organized a press conference at the Mumbai Marathi Patrakar Sangh on 21th October 2015.

We as members of the minority community and as concerned citizens of this wonderfully diverse country are appalled at the state complicity in inciting and supporting violence against minorities. The seeds of hatred sown by right wing groups has reached a stage where innocents are lynched, writers are intimidated and killed, artists hounded and rights of women trampled upon. No community and no country can progress in an environment of intimidation and state terror.

There is a attempt in demonizing and therefore deliberately profiling the Muslims because it is easy later on to make out they were doing something suspicious or its okay to profile them as terrorists and criminals because the public will believe it.

Muslims and other minorities are as much part of the national life as any other citizens. Muslims particularly have no affinity to Pakistan as is made out to be. It is a country like any other country. The right wing groups appear to be more in awe of Pakistan than the Muslims. It is time that all citizens demand equality, freedom and democracy and the right to dissent and to criticize the state. The fundamental freedoms ensured in the Constitution are there for all citizens and they have to be guarded by all. The state cannot tamper with them and trample on the rights of its people.

The state is increasingly encroaching in the private lives of the citizens. Whom do we live with, whom do we marry, what do we eat, what do we wear, how do we celebrate – these are personal decisions left for each person to decide. State should be the last body to interfere in this personal space. Instead of focusing on getting rid of poverty and destitution, getting for citizens good quality and cheap food, shelter, education, livelihood and medical care, the state is completely misplaced in its priority.

We demand that state and its various organs ensure that nobody is discriminated, trashed, intimidated and killed. We want rule of law, safety and security and a state machinery whom we can trust.

--
Pl see my blogs;
http://ambedkaractions.blogspot.in/
http://palashscape.blogspot.in/
Feel free -- and I request you -- to forward this newsletter to your lists and friends!
Posted by Palash Biswas at 10:12 AM