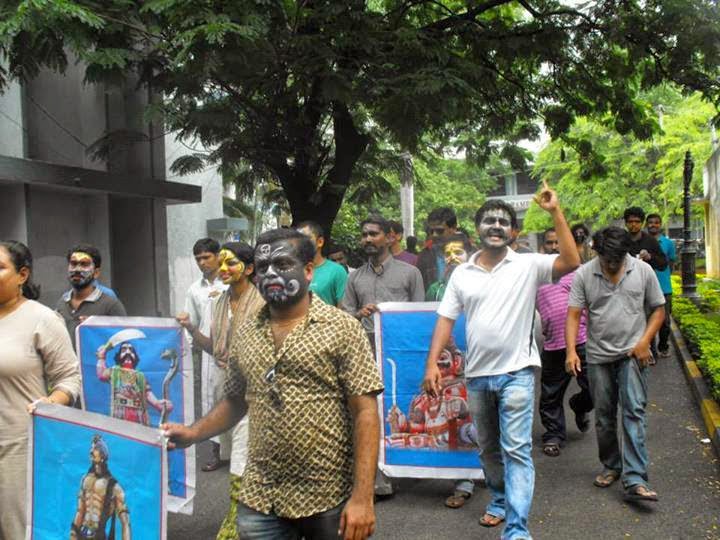 Posted by The Himalayan Voice:
[Prime Minister Dr. Bhattarai,  the widely believed ideologue of the 10 year Janayuddha, the people's war against 'status-quo' for 'parivartankari agragami chhalang' - if we may in a civil phraseology - 'a giant leap forward' for a change in the country, that took some 16,000 Nepalese lives, may have walked around those areas also. The reason being, the Maoists rebellion started in 1996 in the country and intensified in those areas also until a ceasefire was announced to sign an agreement in 2006. ]
By B. K. Rana 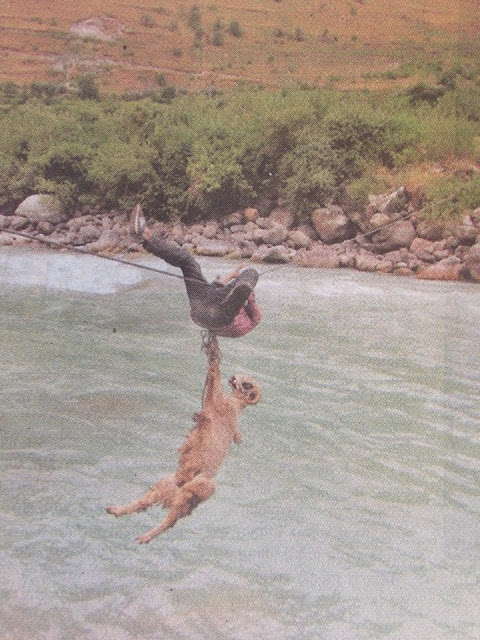 This week at least three pictures from around the Himalayas caught our attention. One of them is a photograph of a hanging ram laced into a corset of 'human-ferry' being carried across Karnali River in Mugu District of Karnali Zone, Western Nepal, posted onto hisFacebook wall by one of the former prime ministers of Nepal, Dr. Babu Ram Bhattarai who, apparently has deep understanding of planning for all-round development of such regions:  implying also infrastructural development such as: roads, bridges or suspension bridges for a kind of 'daily commute', where no road access is available. The western Nepal Mountain is difficult rugged terrain, remote and the least developed part of the country. This should also mean that the people in those areas are least educated and who virtually can't raise their voices loud for their basic needs for a living as the human being.  He has shared the picture fromKantipur Daily and captioned - 'our transport system in the 21st century'.
Prime Minister Dr. Bhattarai,  the widely believed ideologue of the 10 year Janayuddha, the people's war against 'status-quo' for 'parivartankari agragami chhalang' - if we may in a civil phraseology - 'a giant leap forward' for a change in the country, that took some 16,000 Nepalese lives, may have walked around those areas also. The reason being, the Maoists rebellion started in 1996 in the country and intensified in those areas also until a ceasefire was announced to sign an agreement in 2006. All over the Internet, there are some pictures that show him walking around some remote areas in western Nepal. The question is not whether he saw the tuin - a ropeway over Sipaghat  but  why on earth didn't he think of ordering the concerned officials to build in those areas also some suspension bridges when he was the prime minister of the country? But there was also an online report that some Nepalese party-people had received government fund  for building a bridge where there was no river running at all.  There are such pictures all over the Facebook walls and some German tourists have recently posted a video of few students crossing swollen Trishuli River in a Tuin, or a dangerous ropeway carriage over a huge river in some other Nepalese mountains. Now, posting this picture Dr. Bhattarai is implying that Nepal's transportation system is not of the 21th century and  which demands strong will power and commitment in the government to build more suspension bridges among the settlements where required. This is certainly a good gesture he is making here but the country is wasting lots of money on some of the all weather sickly party leaders' treatment abroad and which Dr. Bhattarai also could not resist while in the office. Dr. Bhattarai became the 35th Prime Minister of Nepal from August 2011 to March 2013.
Interestingly, however, it is  the only Dr. Bhattarai, one of the former prime ministers of Nepal, that seems active in social media, making posts onto his Facebook walls but  sadly none other prime ministers, neither sitting nor former, use such a powerful tool to outreach the folks in the grassroots. The other former Prime Minister Jhal Nath Khanal  also has aFacebook public page with only fewer 'likes' or subscription so to say, less than 2405 and without a single post made whatsoever. It is  not updated since March 4, 2011. Prime Minister Khanal has his own website also but which unfortunately seems now down for some unspecified reasons. It also does not seem, the other former Prime Minister Sher Bahadur Deuba has a website or social media pages of his own.  But K. P. Oli, the Nepal Communist Party [United Marxist-Leninists] Chairman and Parliamentary Leader to the Nepalese Parliament, nowadays, appears  all spirited in the social media but he recently toldKathmandu media people 'criminal minded', 'of irresponsible attitude towards the country', 'starhin' - person with no social standing and responsibility and 'jhalla' -drunken also . Should  one of the ruling  political party leaders tell out loud in the public this way ?
*
BEGGARS UNITE IN KATHMANDU 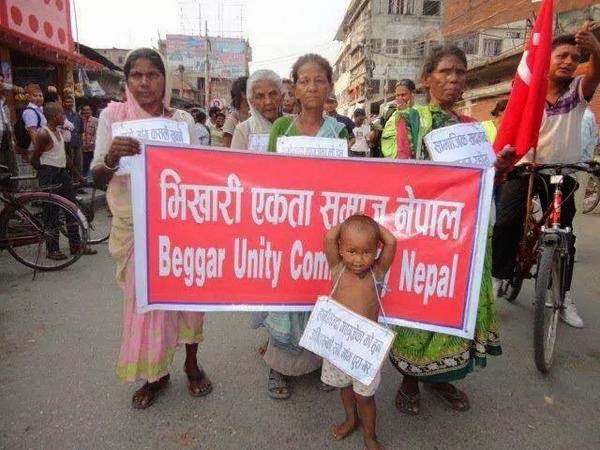 Coming down also from Facebook,  the other picture stunned us  down here but it remains unclear as to when it was taken actually. But it certainly seems being taken in Kathmandu, the capital city of Nepal. It is a picture of some people demonstrating in the streets of Kathmandu, holding a banner reading - BhikhariEkata Samaj, Nepal  - 'Beggars Unity Society- Nepal' ! So, in democracy people can form a union peacefully but the beggars particularly in the capital city of Kathmandu doing so -  does seem  not very spontaneous at all.  It does seem motivated  to  degrade Nepal down the gutter. The political party leaders, the government, bureaucrats  and other people are also responsible for their coming out in the streets. Prof.  Nava Raj Panta of Gimcheon University, South Korea commenting to our Facebook post yesterday wrote - 'some 15 years ago, an Indian Tourist Bus dropped-off many beggars from Gorakhpur at Kathmandu's Kalanki and those of whom, few days later, appeared in Dallu Bridge Area and Ratna Park as well in Kathmandu'. He suspects those are the beggars from India and suggests Nepal government to check whether they are  any Nepalese nationals or not. According to the laws of the land, no foreigners can form, register and run any organization in Nepal.
Whether the beggars were from Nepal or India, as Prof. Panta has remarked above, is not the question we wanted to raise here. The question  here is how has Nepal gone down the drains over these recent years ? Or, where has gone Nepal after the recent socio-political change ? Was the change brought to whomever for doing whatever they wanted in the country ? The picture does not show anything one would feel proud of being a Nepalese or  becoming the people of Nepalese origin in other parts of the world. Rather with this picture everywhere in the social media, the name of world famed Gorkhalis  - in other words, Nepalese people is now tarnished again. This is certainly  a nasty  picture  that has come out from Kathmandu. The beggars should have organized themselves in some other name to raise their voice.
*
Attachments area
Preview YouTube video UML politician Oli denies to recognize Don Dinesh Chari 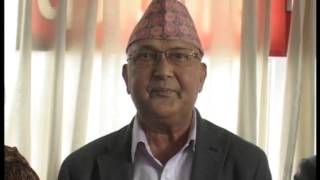 UML politician Oli denies to recognize Don Dinesh Chari
--
Pl see my blogs;
http://ambedkaractions.blogspot.in/
http://palashscape.blogspot.in/
Feel free -- and I request you -- to forward this newsletter to your lists and friends!
Posted by Palash Biswas at 7:13 AM