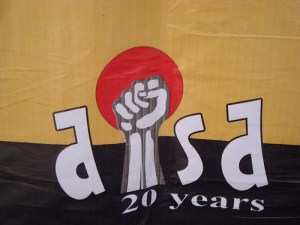 Friends, this is to inform you that JNUSU President, Comrade Kanhaiya has been arrested. Police are doing rounds of the campus and mindlessly witch-hunting activists. RSS is running campaigns to shut down JNU.  We need to Protest against the free run given by Vice-Chancellor to the police which, in coordination with ABVP goons, is identifying student leaders for arbitrary arrest.

We believe in uniting people. On the question of Lyngdoh, Fellowships,Gender Justice, Social Justice, we have united people from every nook and corner of the country- across divides of region, religion, caste or sex..

We have worked for a unity of people, so that they speak up for one another's rights, speak up for justice.. And this is what we get in return— certificates of "anti-national activity" from people who are not a least bit pained by these slogans, but are enjoying these slogans and mobilising people on it!

Why weren't they mobilising when we fought together for fellowships?

Why weren't they campaigning when a fellow student was forced to commit suicide?

Where were they, when there masses of this country were fighting for freedom from imperialism? T

They want to witch-hunt and target us, like they targeted Rohith Vemula. They want us to hang ourselves like Rohith did. But we want to remind them, every dead Rohith will further intensify the students' movement and people's unity.

Urging all students to stand united and defeat these sensationalist, jingoist fascists who want to make up for their sins- of taking away students' fellowships and forcing students to end their life through the practices of caste discrimination and the policies of neoliberalism.

--
Pl see my blogs;
http://ambedkaractions.blogspot.in/
http://palashscape.blogspot.in/
Feel free -- and I request you -- to forward this newsletter to your lists and friends!
Posted by Palash Biswas at 7:12 AM