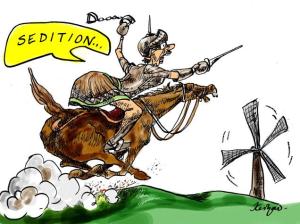 It is shocking that the Delhi Police has arrested the President of theJawahar Lal Nehru University Students Union (JNUSU) on the charges of 'sedition' –a provision of law about which Jawahar Lal Nehru, the firstPrime Minister of India, had said in 1951, "Now as far as I am concerned that particular Section is highly objectionable and obnoxious and it should have no place…in any body of laws that we might pass. The sooner we get rid of it the better."

The provision of section 124-A of the Indian Penal Code, which provide punishment for 'sedition' was enacted by the British to silence all opposition to its autocratic rule. This provision had been used by the British against Bal Gangadhar Tilak, Mahatma Gandhi, M.N.Roy,Maulana Hasrat Mohani, and many other freedom fighters. It is unfortunate that the governments in free India have been misusing this anachronistic colonial era law from time to time in order to silence the voices of dissent. The human rights organizations, especially PUCL, for many years have been campaigning for its repeal.

The action of the Delhi Police is also in violation of the law laid down by the Hon'ble Supreme Court in the celebrated case "Kedar Nath Das Vs. State of Bihar" (AIR 1962 SC 955) which held that "…comments, however strongly worded expressing, disapprobation of the actions ofGovernment, without exciting those feelings which generate the inclination to cause public disorder by acts of violence, would not be penal." It appears that there was no intention on the part of the President of JNUSU to incite violence and therefore the action of the Delhi Police in arresting him is condemnable. PUCL appeals to the Home Minister (Central Government) to instruct Delhi Police to release the arrested leader immediately.

The governments should remember what Gandhi said in 1922 in his trial for sedition, " Affection cannot be manufactured or regulated by law".
N.D.Pancholi

--
Pl see my blogs;
http://ambedkaractions.blogspot.in/
http://palashscape.blogspot.in/
Feel free -- and I request you -- to forward this newsletter to your lists and friends!
Posted by Palash Biswas at 7:03 AM