West Bengal Chief Minister Mamata Banerjee unveiled a bronze statue of Rani Rasmani, the most neglected founder of the Dakshineshswar Kali Temple on her 220 th birth anniversary on Friday. Rani Rasmani was a daughter of a fisherman who appointed Ramkrishna as purohit in the temple and Swami Vivekanand met Ramkrishna in the temple. Without Rasmani, Ram Krishna Mission was impossible but the Mission never recognised this.

Born in a village called Kona near Calcutta to a family that lived in great poverty.  She was exceptionally beautiful and won the attention of a wealthy landlord. Rachandra Das, from Calcuttawho asked for her hand in marriage. Rani married Rachandra Das and went to live in a mansion in Janbazar, Calcutta. She was widowed at the age of 44 and efficiently managed the estate of her late husband and their four daughters. She became a champion of civil rights, protesting especially against the British colonial authorities oppressive actions regarding fishing rights. She had a temple for the Goddess Kali built in the town of Dakshineshwar.

Rani experienced discrimination in her life as she was originally from a low caste.  She was in fact not allowed to own a temple or to cook food for the Brahmins, all of which she did owing to her accession to wealth through marriage. In response to casteist discrimination, the guru Ramkumar consecrated the temple on 31 May 1855, declaring it to be for the benefit of all, irrespective of caste or religion. This was indeed the case as all levels of society attended the temple and food was readily available to all temple-goers.
Rani did not have any formal teaching, except for her life which she lived according to the wisdom of the Goddess Kali and had a strong faith in her. She was open to guidance from the Goddess and followed it to the letter. Rani was a humble woman. Once, the guru Ramkrishna, who was appointed to Kali's temple in Dakshineshwar slapped Rani in the face and chastised her for focusing on worldly thoughts in a godly place. There was an outcry from onlookers who wanted the priest punished. Rani refused to do so, saying that the chastisement was coming directly from Kali, as she was in fact thinking of legal issues at the time.

Rani was particularly devoted to Kali, the Mother of Time, Goddess of beginnings and endings, new life and regeneration. 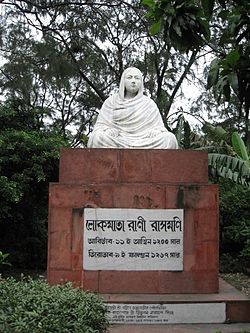 Rani Rashmoni (Bengali: রানি রাসমণি, 1793—1861) was the founder of the Dakshineswar Kali Temple, Kolkata, and remained closely associated with Sri Ramakrishna Paramhansa after she appointed him as the priest of the temple. Amongst her other including construction of street from Subarnarekha River to Pari for pilgrims, Babughatalso known as Rani Rashmoni Ghat, Ahirtola Ghat and Nimtola Ghat for the every day bathers at the Ganges and offered considerable charity to the Imperial Library (now theNational Library of India) and Hindu College (now Presidency College).[1].
Lok Mata Rani Rashmoni Mission is today situated near Nimpith Ashram, South 24 Parganas [2].

She was born on 26 September 1793 into a poor farming family of Harekrishna Das inKona village, in present day North 24 Parganas [3]. Exceptionally beautiful, she was married to Babu Rajachandra Das of Janbazar,Kolkata, a member of a wealthy zamindar family, when she was eleven years old. After her husband's death she took charge of the zamindari and business. She soon proved herself a natural leader. While the prestige of the zamindari grew, Rani Rashmoni, being very pious from childhood, continued to lead an extremely religious and austere life, befitting a widow in Indian Bengali Hindu society. Rani Rashmoni died on 19 February, 1861. 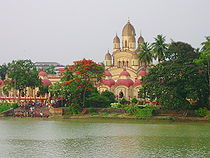 The Rani and her clashes with the British in India became household tales in her time. By blocking the shipping trade on a part of Ganges she compelled the British to abolish the tax imposed on fishing in the river, which threatened the livelihood of poor fishermen. When Pujaprocessions were stopped by the British on the charge that they disturbed the peace, she defied the orders. The British had to withdraw the penalty imposed on her in the face of public opposition and rioting in her support.
Rani Rashmoni also had to her credit numerous charitable works and other contributions to society. She oversaw the construction of a road from Subarnarekha river to Pari for pilgrims. She funded the construction of ghats such as Babughat (in memory of her husband), Ahiritola Ghat and Nimtala Ghat for the daily bathers in the Ganges. She donated generously to the then Imperial Library (now the National Library of India) and Hindu College (now Presidency College). Prince Dwarkanath Tagore had mortgaged a part of his Zamindari in now South 24 Parganas (part of present day Santoshpur and adjoining areas) to Rani Rashmoni for his passage to England. This part of land which was then a part of the Sunderbans was marshy and almost uninhabitable except for some families of thugs who found the area convenient to stay and venture out for plunders in far away places mounted on stilts. Rani Rashmoni persuaded these families and helped them to build up fisheries in the surrounding water bodies that later turned into large rich bheris. They gradually gave up their 'profession' of plundering and transformed into a community of fishermen. This was a great social reform that the Rani had initiated.
A divine revelation led her to found the famous temple complex on the banks of the Ganges at Dakshineswar in the North 24 Parganas.Sri Ramakrishna Paramhansa (then known as Gadadhar) was appointed its head priest under her patronage.
Rani Rashmoni's House at Janbazar was venue of traditional Durga Puja celebration each autumn. This included traditional pomp, including all-night jatras (folk theatre), rather than by entertainment for the Englishmen with whom she carried on a running feud. After her death in 1861, her sons-in-law took to celebrating Durga Puja in their respective premises [4] 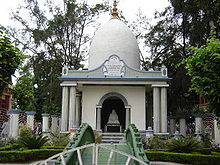 
text source from the Lokmata Rani Rashmoni Mission[clarification needed What is this?]