It is failed foreign policy.It is failed diplomacy yet again!Bangladesh set on fire to inject unrest in India!Amnesty fears attacks on Bangladesh Hindus! 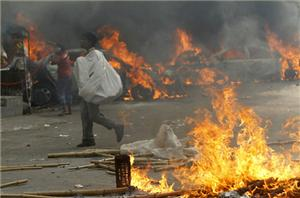 Sorry to communicate all of you very late in the night,almost in the early morning.It is very grave.The government of India is caught unaware that the prolonged turmoil in Bangladesh threatens the security of India.It is prolongued unrest all the way.You may remember,I have been warning.With the recent execution of the war crimes convict, Jamaat-e-Islami (JI) leader Abdul Quader Mollah, the hopes for a political reconciliation in Bangladesh have died down, said British weekly The Economist. "With him (Mr Mollah) died the hopes thatBangladesh might come to ... central office, rights to hold rallies and processions sound reasonable. Equally pressing are the demands of the AL that includes withdrawal of blockades, shutdowns and avoid creating unrest, said the English daily of the Saudi Kingdom.

Molla had been found guilty in February by a much-criticised domestic tribunal of having been a leader of a pro-Pakistan militia that fought against the country's independence and killed some of Bangladesh's top professors, doctors, writers and journalists.  Fears that the execution could spark further unrest, in a country where political violence is intensifying in the build-up to deeply divisive elections, were soon realised as the Islamists rioted in street battles in towns and cities.

Mullah, a senior leader of Bangladesh's largest Islamist party, Jamaat-e-Islami, was convicted on five counts of murder and genocide by the International Crimes Tribunal (ICT), a domestic court set up three years ago. The hanging marks a watershed in the country's short but often bloody ... but the negotiations suggest they may consider rescheduling the polls. But the entire negotiating process, fragile as it is, could go completely off the rails if the protests over Mullah's hanging reach the intensity of February's unrest.BBC reports.

In its reaction to the execution of Jamaat-e-Islami Bangladesh leader Abdul Quader Molla, Foreign Office Friday said that it was not Pakistan's policy to interfere in the affairs of any other countries, Geo News reported. "Pakistan, however, has noted ... leaders for war crimes. Fears that the execution could spark further unrest, in a country where political violence is intensifying in the build-up to deeply divisive elections, were soon realized as the Mollah supporters rioted in street battles in towns and cities.

Indian diplomacy is a failure from the beginning.It is responsible for the Himalayan blunder which could not be rectified till this date.India as a nation is seized withing just because of its foreign policy and a sustained failure diplomacy People`s republic India has been a  failure to defend the minorities across the border since the transfer of population at the time of partition.It failed to resist sustained persecution of minorities in East pakistan,Bangladesh,Pakistan and Srilnka and always paid very heavily.We may not get rid of insurgency and terror strikes just because we failed as a nation to protect the minorities within and across the borders time and again.

I am very sorry it is happening once again.The Parliament is rocked in constnat noise created just for nothing. Coincidentally,the parliament is in the session.

Coincidentally,it is historical fact that indian military intervention by  Mrs Indira Gandhi did contribute decisively to liberate Bangladesh and it is also coincidental while we celebrate the victory of the Bangladesh Liberation war,entire Bangladesh is set on fire by those forces against whom the liberation war was fought and won.

It is tragically ironical that present Indian leadership fails to understand the gravity of the situation.

Mollah, who was also the Jammat's assistant secretary general, was hanged at 10.01 p.m. Thursday, hours after the country's highest court dismissed his petition to review his death sentence.

Mollah was sentenced to death for crimes against humanity in the 1971 Liberation War.

"The country is on a razor's edge at the moment with pre-election tensions running high and almost non-stop street protests. Mollah's execution could trigger more violence with the Hindu community bearing the brunt," Faiz said.

The rights body said Hindus are at a risk of reprisal attacks after the execution.

"Bangladesh's minority Hindu community has been targeted in attacks this year following an earlier ICT (International Crimes Tribunal) verdict, they are at particular risk of violence now the execution has been carried out," Faiz said.

"The authorities must ensure that anyone at risk, especially Hindus, are given the protection they need at this tense time. Whole villages were burned down in the violence against Hindus this year and no one has been brought to justice.

"It is also crucial that all politicians in Bangladesh make it crystal clear to their supporters to refrain from human rights abuses and that attacks on Hindu communities are unacceptable," Faiz added.


Meanwhile Bangladesh on Saturday paid homage to victims, including the deceased intellectuals who were killed by the Pakistani forces and their collaborators during the 1971 liberation war.

People held the Bangladesh national flag and black flags, and gathered at the memorial to pay tribute to the victims.

The President of the National Garment Workers Federation in Bangladesh, Amirul Haque Amin, said that all war criminals should face speedy trials and should be hanged.

"On December 14, 1971, many people were killed by the Razakars (paramilitary force organized by the Pakistan Army in East Pakistan) and the student wing of Jamaat-e-Islami, Islami Chhatra Shibir. We have come here to pay homage to the victims. People of the country are very happy with the execution of the Islamist leader, Abdul Quadar Mollah. We demand that rest of the war criminals and the members of Jamaat-e-Islami who are accused of killing should undergo trial and should be hanged," he said.

Bangladesh became part of Pakistan at the end of British colonial rule in 1947. The country, then known as East Pakistan, won independence with India's help in December 1971 following a nine-month war against the rest of Pakistan.

Islamist opposition leader, Abdul Quader Mollah, accused of war crimes committed during the 1971 war of independence from Pakistan, was executed on December 12.

The decision to hang Mollah, a senior figure in the Jamaat-e-Islami party that is a key part of the opposition coalition, drew widespread condemnation from political allies and international human rights groups.

But many citizens celebrated the first ever execution of a Bangladesh war criminal, which took place late on Thursday at the Dhaka Central Jail in the capital.

There has been almost daily unrest in the impoverished nation of 160 million people since last month's announcement of parliamentary elections on January 5.

Prime Minister Sheikh Hasina and her ruling Awami League are determined to go ahead with the vote, but the opposition, led by Bangladesh Nationalist Party (BNP) head Begum Khaleda Zia, says it will not participate unless an interim government is installed and Hasina steps down.

Senior leaders from the Awami League and BNP-led opposition were expected to meet later on Friday for a third round of talks to break the political deadlock.

The deadlock is mainly over Sheikh Hasina-led government's move to conduct Jan 5 parliamentary elections under a caretaker government like previous elections. The opposition parties-led by Khaleda Zia's BNP oppose it.

On Friday, top Awami League and BNP leaders proposed ways to emerge out of the current crisis, officials of the two parties said, bdnews24.com reported.

"They have given some proposals; we have given ours," said Awami League General Secretary Syed Ashraful Islam after the meeting. He said the party would take a decision after discussing them.

"We began our talks to pave the way for a fair election with all parties taking part," said BNP acting Secretary General Mirza Fakhrul Islam Alamgir.

The BNP had given certain specific proposals and so had the Awami League, he said. "Now we will decide after discussion in the party."

Leaders of these two sides had held talks at the same place Wednesday with UN Assistant Secretary General Oscar Fernandez-Taranco bringing them to the negotiating table. He left Dhaka Wednesday evening, while urging the two sides to continue talks.

The UN assistant secretary general for political affairs during his visit had managed to bring the bickering politicians -- Prime Minister Hasina and Opposition leader Zia -- to the negotiating table and urged them to find out home-grown solutions. 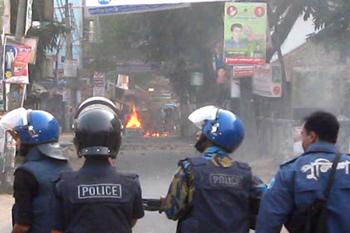 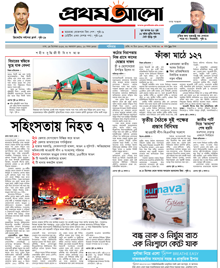 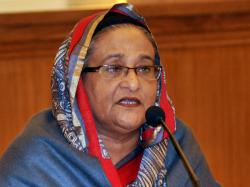