Mukesh Ambani demands that “Antilla” be made separate state!?

Mukesh Ambani demands that "Antilla" be made separate state!? 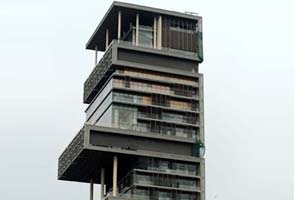 Mukesh Ambani demands that "Antilla" be made separate state!

Mukesh Ambani demands that "Antilla" be made separate state?

Mainstream media has not broken the news,but the information surfaced widely. I am not sure.

Is there anyone to confirm or deny?

However, I am not surprised.

We Indian citizens have no sovereignty at any level which Mr.Ambani and his industries do enjoy.ONGC and oil companies have been reduced and subjected to disinvestment.Gas prices just doubled for reliance while UID linked gas consumers have been deprived of subsidy. Every petro minister has been on Reliance payroll. The government of India has been constantly complying  to reliance industries interests long before the incarnation of reforms god!

Reliance supremo Mr Mukesh Ambani is to decide who would be the next prime minister.

Provided he demands statehood for Antalia, the government of India should be obliged. 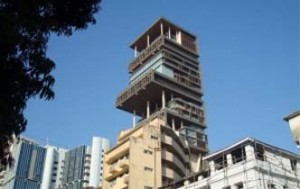 Moments after the Congress Working Committeeannounced the bifurcation of a separate Telangana state, Reliance industries Ltd chairman Mukesh Ambani has made a similar demand, that his residence Antilla, dubbed as the world's most expensive residence, be granted statehood.

Speaking to The UnReal Times business correspondent Dharubhai Manghnani the tycoon said, "Why not? Antilla is like a state in itself. Each floor is like a district and each room on a floor is like a city. It is only right that this be made a separate state, so that it makes it easier for me to ..err..the government to govern it. Mumbai can be the joint capital of Maharashtra and Antilla, until I decide which floor of Antilla to adjudge as the capital of the state."

"The Mumbai Indians team name can stay intact as long as Mumbai is the capital of Antilla. Once I make my decision on the capital, the team name will have to be changed, of course" Ambani hastened to add.

The UPA government has reacted positively to the demand, saying that it will be fulfilled ASAP. "It is widely believed that Antilla, not Delhi, is India's real seat of power. So the least we can do is grant it statehood replete with its own assembly, dummy Prime Minister and even a Pappu," said Finance Minister Chidambaram. "With a state like Antilla, no one can claim anymore that Gujarat is India's most prosperous state," added Mani Shankar Aiyar. "That honour will belong to Antilla which will also be India's most secular state."

Antilla is the only home that we have in the world: Nita Ambani

New York:  Billionaire Indian industrialist Mukesh Ambani's wife Nita describes their 27-storey Mumbai house Antilla as a "modern home with an Indian heart" and the "only home we have in the world."

The ultra-luxurious 400,000 sq feet Ambani mansion and its contents continue to fascinate people not only in India but also abroad. Vanity Fair, which interviewed Nita last November, will publish a few pictures from inside Antilla in its June edition, giving a sneak peek into what has been described as 'The Taj Mahal meets flash Gordon."

"The closed door policy has only piqued the worldwide fascination that has surrounded the edifice," the magazine said of Antilla.

Contrary to speculation that the Ambanis had not moved into their home as it did not conform to the ancient Indian architectural doctrine of 'vastu shastra', Nita told Vanity Fair that they had moved into the house around September last year and some of the media reports about their house were "exaggerated."

"This is the first time I am talking about my home. There have been exaggerated reports in the media about it I must say," she said in the article 'The Talk of Mumbai,' the title referring to Antilla.

"We moved in two months ago. And then it was going around that we have not moved in. It is a modern home with an Indian heart...It is the only home that we have in the world," she said in the interview which was conducted in November.

A New York Times report last October had said the Ambanis had not moved in to their new home, considered one of the most expensive private residences, and family members only slept there "sometimes".

Nita told Vanity Fair that the whole house is based on the theme of sun and lotus. Exquisite materials like rare woods, marble, mother of pearl and crystal were used to craft the shapes of the lotus and the sun in the building.

Ambani said rooms for the family are at the top of the high-rise to let in plenty of sunlight. The family quarters "sit at the pinnacle. We made our home right at the top because we wanted the sunlight. So it is an elevated house on top of a garden," Nita said.

Of the eight pictures that accompany Vanity Fair's article, one shows Nita in a red and pink saree standing in a brightly lit porch near one of the several terrace gardens of her home with a marbled dome structure in the background.

Another picture shows her reading a book in one of the expansive and exquisitely decorated living areas, with tall pillars and glass windows through which Mumbai's high-rises are visible.

Vanity Fair said like any Indian housewife Nita keeps a track of the weekly kitchen spending and waits for her husband "with candles lit and supper ready" to come home from office which is typically at 11 at night.

"I like to have everything smiley and happy for my husband. Men don't want to see a grumpy face at the end of a hard day," it quotes Nita as saying.

The article also talks about the series of enterprises that Nita has built in the past years that are "proud success stories in contemporary India" like an international preparatory school, a premier league cricket team, the nation's first braille newspaper in Hindi and a 400 acre model township that  houses 12000 people.

"For a modern maharaja living in Mumbai, a peninsular city where land is in particular short supply, there is nowhere to go but up and up the Ambanis went," it read.

Antilia is a 27-floor residence in South Mumbai belonging to businessman Mukesh Ambani, chairman of Reliance Industries.[3][4] A full-time staff of 600 maintains the residence, reportedly the most expensive home in the world.[5]

The building is named after the mythical Atlantic island of Antillia. Antillia, according to Aristotle, was a huge island in the Atlantic. 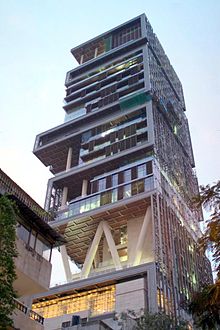 Antilia as seen from Altamount Road

Antilia was designed by Chicago based architects, Perkins + Will. The Australia-based construction company Leighton Holdings began constructing it.[6] The home has 27 floors with extra-high ceilings (other buildings of equivalent height may have as many as 60 floors).[7] The home was also designed to survive an 8-richter scale earthquake.[8]

The transactions surrounding the acquisition of the land on which this building is constructed, as well as various aspects of the construction and design of this building seem to raise significant issues of regulatory malfeasance and corruption among the various parties involved.[9]

In 2002, this property was purchased by a Mukesh Ambani controlled entity - Antilia Commercial Private Limited from the Currimbhoy Ebrahimbhoy Khoja Trust, in direct contravention [10] to section 51 of the Wakf Act.[11]

This land was owned previously by the Currimbhoy Ebrahim Khoja Yateemkhana (Orphanage). This charitable institution had sold the land allocated for the purpose of education of underprivileged Khoja children to Antilia Commercial Private Limited in July 2002 for

The Waqf minister Nawab Malik opposed this land sale and so did the revenue department of the Government of Maharashtra. Thus a stay order was issued on the sale of the land. Also, the Waqf board initially opposed this deal and filed a PIL in the Supreme Court challenging the decision of the trust. The Supreme Court while dismissing the petition asked the Waqf board to approach the Bombay High court. However the stay on this deal was subsequently vacated after the Waqf board withdrew its objection on receiving an amount of

In 2007 the Allahabad government said the structure is illegal because the land's owner, the Waqf Board, had no right to sell it, as Waqf property can neither be sold nor transferred.[5]Ambani then obtained a No Objection Certificate from the Waqf Board after paying

16 lakh and began construction.[5] In June 2011, the Union government asked the Maharashtra government to consider referring the matter to the Central Bureau of Investigation.[19][20][21][22]

Indian media has frequently reported that Antilia is the world's most expensive home costing between US$1 and 2 billion.[24][25][26] Thomas Johnson, director of marketing at architecture firm Will and Hirsch Bedner Associates that was consulted with by Reliance during building floor plan design, was cited by Forbes Magazine as estimating the cost of the residence at nearly $2 billion.[27] In June 2008, a Reliance spokesman told The New York Times that it would cost $50–$70 million to build.[28] Upon completion in 2010, media reports again speculated that, due to increasing land prices in the area, the tower may now be worth as much as US$1 billion.[29][30]

Tata Group former chairman Ratan Tata has described Antilia as an example of rich Indians' lack of empathy for the poor.[31] Tata also said: "The person who lives in there should be concerned about what he sees around him and [asking] can he make a difference. If he is not, then it's sad because this country needs people to allocate some of their enormous wealth to finding ways of mitigating the hardship that people have."

Some Indians are proud of the "ostentatious house", while others see it as "shameful in a nation where many children go hungry".[4]Dipankar Gupta, a sociologist at New Delhi's Jawaharlal Nehru University, opined that "such wealth can be inconceivable" not only inMumbai, "home to some of the Asia's worst slums", but also in a nation with 42 percent of the world's underweight children younger than five.[4] Recently Ratan Tata said that "It's sad Mukesh Ambani lives in such opulence ole".[32]

Author activist and trained architect [33] Arundhati Roy questioned whether the "Ambanis hope to sever their links to the poverty and squalor of their homeland and raise a new civilisation" through Antilia.[34]