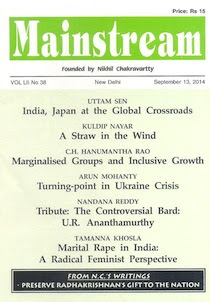 In the same section

Meenakshipuram, a village in Ramanatha-puram (now Theni) district in Tamil Nadu, was the epicentre of an extraordinary social, political and religious upheaval in 1981. A large number of men and women belonging to the Pallan community, who are Scheduled Caste,1 had embraced Islam there. Th is created consternation across India and a strong feeling of anger, abomination as also nervousness marked by accusation and allegation pervaded the atmos-phere. Untouchability, discrimination and degra-dation coupled with atrocities led the victims of caste hatred to conversion: for them desertion of the Hindu-fold meant emancipation. Tamil Nadu continues to be as discriminatory, atrocious and exploitative for the Scheduled Castes as Haryana, Bihar, Uttar Pradesh, Rajasthan etc. But many people had noted then that atrocities against the Scheduled Castes, which are the favourite pastime of the upper castes, had stopped abruptly, though for a while. A torrential allegation of petrodollars responsible for the Menakshipuram conversion was very loud. The stone blindness of their antagonists did not allow them to see how atrocities, deprivation, discrimination, untouchability, though a pan-India feature, caused havoc to the dignity of the Scheduled Castes in Tamil Nadu as well. There is little awareness in Hindu quarters about the dignity and esteem of the Dalits.

Much later, disclosed the media, 72 Valmiki families at Agra, UP who had embraced Christianity in 1995—have recently reconverted to the Hindu-fold. But some Hindutva veterans want the countrymen to believe that theirs is not reconversion to Hinduism—it is mere 'home-coming'. They are, therefore, happy because the Valmikis would go back to their home, restart their traditional occupation which is cleaning, sweeping streets, dry latrines and carrying night soil on their heads generation after generation hereafter without murmur and live like slaves. The Hindu Goebbels, thoroughly indoctrinated, would not think anything more edifying for them. By returning home, they must not aspire anything better or noble. That is the law of caste, though an incurable cancer, which Lord Krishna in the holy Gita claims to have created and, therefore, destroyed for eternity peace, happiness, prosperity or solidarity of the Hindudom.2

In the backdrop of Meenakeshipuram, the Government of India sought information from the Government of Bihar in 1984 on the reported conversion of adivasi or tribal people because of inducement or allurement to Christianity in Singhbhum district. The materials were required to facilitate the Union Home Minister for replying a parliamentary question. A Member of the august House wanted to know if foreign funds were used as allurements by the Christian missionaries to convert the poor and ignorant tribals in that district. The questioner also emphasised for information on the quantum of foreign funds inflow into Singhbhum for conversion.

The district police submitted an itemised inquiry report covering all points for onward communication to the Union Government. The police view was that the missionaries had used monetary inducement for conversion of tribals to Christianity. The materials gathered from the field inquiry travelled upward through the labyrinth of hierarchical ladders and ultimately landed on my table for seeking approval of the Home Secretary for communication to Delhi. Parliament questions in official circles are accorded highest priority at every level.

The Singhbhum Police report, accompanying the auditors' report on the foreign funds utilised in the 'proselytisation drives' for the period concerned, was initiated at and by the concerned police station or thana. This report was dittoed as well as vetted by all including the Police Headquarters without altering or adding even a single comma or semi-colon. Lower level officials in the Home Department, who too went with the police version, did not show application of mind in their analysis. It was brought on record that a sum of about two million rupees was received and utilised by the Christian missionaries in Singhbhum. It was clear from their reports that funds were earmarked and utilised for certain activities by the Christian missionaries. The missionaries had set up schools and established students' hostels, provided reading-writing materials, dresses, food, etc. for students mostly, if not entirely, from indigent tribal families. Funds were also allocated for establishing and running a few primary health centres for the local people as there was no healthcare facilities within easy reach and affordability. The theatre of missionary activities was far away from the nearest hospitals at Chaibasa, which is the district headquarters of Singhbhum. For a tribal, the steel city of Jamshedpur was a fearful, distant destination. Village road construction, digging of ponds for water supply etc. undertaken by them helped ameliorate the poverty-stricken local people—tribals in the main—particularly in the lean seasons. Plucking and collection of tendu leaves (for bidi rolling) and other minor forest produce for private contractors, who are not either law-abiding or charitable, offered them seasonal employment. For major parts of the year, they were left high and dry.

Which Funds used for Allurement for Conversion?

The auditors reported that the missionaries had exhausted the funds for defraying expenses over activities, for example, (1) setting up schools and hostels; (2) supply of reading-writing materials, food and dresses; (3) establishing primary heath centres; (4) public works like construction of rural roads in tribal villages; (5) digging ponds for water supply and the like. The report did not specify any funds either earmarked or used as monetary allurement to tribals for embracing Christianity though the Parliament question sought information precisely on it. Absence of hard and unchallengeable proof is bound to ridicule and pooh-pooh such an allegation as a figment of imagination.

After examining the police report along with the audit report with the seriousness it merited, I raised a simple question: "Which part of foreign funds has been offered as allurement to the tribals for converting to Christianity?" This simple and inescapable question was not raised at any level from the police station to the Police Headquarters and even in my own Department of Home (Special). Inducement for religious conversion in India is unlawful while voluntary conversion is not illegal. The audit report did not find any role of money utilised as allurement for religious conversion. Neither did the police point any accusing finger. Nevertheless, they concluded that conversion of tribals in Singhbhum was the result of monetary inducements,.

My note went on to state that there was no denying the fact that the activities the missio-naries launched were integral to overall development of the area though it ameliorated the life of poor tribal communities living in forests. Leaving the frontiers of the society brittle, any idea of a modern and progressive nation was foolish and daydream. If any section of the people were denied education, healthcare, communication and reasonable standard of living and livelihood, it was a major failure of the state, I pointed out. Failures to bring any section of the society within the ambit of development and integrate them in the mainstream are fraught with long-term, disastrous and irredeemable consequences. The country boasts of many reputed charitable institutions and organisations known for dedicated humanitarian services in normal times as also in emergencies like floods, earth-quakes, epidemics, other natural calamities etc. But they had either overlooked or shunned the tribals and low-caste people living in far-flung, inaccessible areas, forests, hills and riverine shanties or slums for generations. This studied negligence had provided space for the Christian missionaries to step in and fill the vacuum, I noted. What the state was to perform for the tribal communities, they have accomplished. If any tribal or anybody voluntarily embraced Christianity, without inducement or pressure, the law cannot prevent her/him. Indian citizens enjoy this as a right to the freedom of religion. Lack of sympathy, humanism, catholicity and fellow-feelings alienated a section of the countrymen to desert the religion of their forefathers. It was pointed out that the conjecture of monetary inducement in the parliamentary question was baseless and the answer, therefore, was in the negative. In other words, no foreign funds were used to allure the tribal communities in Singhbhum district to embrace Christianity.

In the end, I suggested to the Home Secretary that the police might be asked to re-investigate and pinpoint the quantum of funds, if any, utilised by the missionaries to convert the tribals into Christianity through allurement so that the Union Home Ministry might be intimated accordingly to facilitate to reply the question in Parliament.

While I was dictating my note to my personal assistant and stenographer, Patna District Magistrate Mukhtear Singh had landed in my chamber for some discussion. I asked him to wait for a few minutes so that the dictation could be completed for submission of the file to the higher authorities to obtain approval. On completion of my dictation, which he followed attentively, Mukhtear told me with a mischievous smile: "Sir, you have qualified yourself for transfer from the Home Department."

Lo and behold! He proved prophetic. The State Cabinet in its next weekly meeting transferred me to somewhere else. But the file did not return to me till then with any orders.

Indonesia, Malayasia, Singapore, Canada, USA, Guyana, Maharastra, etc. Their population, according to the 2001 census, aggregated at 2.2 millions and suffered untouchability and discrimination.

2. "I created the fourfold varnavyvastha." Sanatan Hindus are euphoric about this though the Sudras and untouchables have no reason to cheer.

The author is a retired IAS officer of the Bihar cadre and former Vice-Chancellor, B. R. Ambedkar Bihar University, Muzaffarpur. For comments and observations email to atulb64@gmail.com