Neither China nor India may afford a regional war,hope,Sus understands as Both countries opted free market economy and have to support each other for the sustenance of growth! Palash Biswas

Neither China nor India may afford a regional war,hope,Sus understands as Both countries opted free market economy and have to support each other for the sustenance of growth!

Indian history is closely linked with central Asia for thousands of years.Mahapandit Rahul Sankratyan is the only person who studied it very deeply and wrote Madhya Asia Ka Itihas in two parts.It would be better for anyone to have studied this before addressing the Himalayn puzzle.The silk route has been the key of Indian economy in acient times.The history repeats itself as India and China has to revive the Silk route once again.Not only this,buddhism has been the basic connectivity between the two countries.Not Hindutva,but Buddhism would be the way of biliteral relations once again.

We must welcome the initiative taken by Indian minister of foreign affairs, the old goldie beautiful Mrs Swaraj to blow of border stand off centred on an imaginary line created by the colonial imperialist British Raj in India.During the visit of Chinese President,the theme song of panchsheel and coexistence was very loud which had been overlapped by media hype of Chinese aggression so much so much so that suddenly there seemed another war scenario to be created in the Himalayas reminiscent of Sino Indian border clash in 1962.The silk route lost its existence and the Mcmohan line prevailed over panchsheel once again.Unfortunately Indian prime minister had been provoked by media against national interest.

On the other hand,Chinese leadership was also as much as provoked to talk about imminent regional war,understandably against India.

The storm is over and India as well as China much be grateful to a lady named Sushama Swaraj to ensure continued friendship between two countries.As Humphery Hawksley points out in his article in Economic Times very well why China may not afford regional war.I just want his permission to add that neither China nor India may dare to engage in yetanother war in the Himalayas.

India and China are the front running emerging market in the global free market economy.It is rather in the best interest of the people and the twon nations that they must focus on growth lest they might lose theirposition in global economy once again.

Barack Hussain Obama did an excellent work as two term President of America as he tried his best to pull out American forces from the middle east and helped the economy in recession.But he failed just because of the hegemonial war economy of USA and lost the hard earned advantage to jump once again in the burning oil.The third oil war makes him as much as destructive for America as Richard Nixon,Senior and Junior Bush proved themselves to involve America in yet another suicidal war which puts dollar supremacy at the stake.

Better,Chinese as well as Indian leadership should learn from American experience.

President Xi Jinping asked his generals to prepare for a regional war earlier this week. Here's why that may not be a great idea

China's president Xi Jinping is leader of the world's most populous country and the second biggest economy. He presides over the building of roads, railways, airports and infrastructure at an astonishing rate.

He and his colleagues are the architects of a system that has pulled hundreds of mil lions out of poverty, structured robust in stitutions and created world-class trans national corporations.

Earlier this month, Alibaba, the Chinese online retailer, made a record $25 billion launch on the New York stock market. The rags-to-riches story of its founder reso nates with the dreams, ideas, success and money of modern China whose economic achievements have been the envy of India, indeed of much of the developing world.

Yet for all of that Xi appears to have an itch on his face. Time and again he makes public statements instructing his military to prepare for war.

He did this in April and December last year. Then earlier this week he did it again, telling his generals to "improve their com bat readiness and sharpen their ability to win a regional war in the age of informa tion technology." The latest emphasis is on the region and technology and the ques tion raised is what does it mean for India.

First, technology. For more than a dec ade a once top secret agency within the People's Liberation Army (PLA), known as the Advanced Persistent Threat Unit 61398, has been honing its hacking skills.Among its targets is the Indian government. Intelligence officials believe the core Chinese teams operate from a drab, 12-storey building in Pudong, an industrial suburb of Shanghai.

The next major war, whether regional or global, will be fought as much with electronic weapons that jam systems and crash stock markets as with missile strikes and boots on the ground. China is beefing up this part of its military. India must do the same. With home-grown hi-tech skills that stretch from California to Bangalore to the Defence Intelligence Agency, Indian tech geeks are more than capable of taking on China, but they do need the budget.

Second, the region. After years of ham-fisted diplomacy, China finds itself bereft of strategic allies and its record in choosing them has been dreadful.Cambodia's Khmer Rouge, Myanmar's military junta and North Korea's dynastic dictatorship have hardly been partnerships of strength and reliability. Its key ally, Pakistan, is pitifully unstable.

So, China finds itself more strategically isolated in Asia than it was a generation ago while the world's two biggest democracies, India and the US, have forged a flawed but active alliance which arose from one of America's post 911 foreign initiatives. It is not difficult, therefore, to guess the war-gaming taking place in Chinese military academies.

Potential enemies include Japan because of history and the disputed East China Sea islands; South Korea over a possible mishandled collapse of North Korea; the Philippines or Vietnam over Beijing making a push too far into the South China Sea; America in any flashpoint in the Asia-Pacific; and of course India where Chinese and Indian troops continue to face each other on the disputed Chumar area of Ladakh.

All these governments, bar one, have some kind of strategic or military arrangement with the US.Therefore any flare up into a hot war would put China into direct hostility with America. The exception is Vietnam with whom China fought a war in 1979. Battle hardened from defeating both France and the US, Vi etnamese troops ran rings around the Chinese who through sheer numbers reached their ob jectives and then rapidly fled.Against this spectre of war comes talk of trade and the peace dividend of entwined economies. Xi has pledged $20 billion to India over the next five years and India has invited Chinese involvement in infrastructure projects -a far cry from the thorny relationship 10 years ago when China was banned from such projects because of security concerns.

There is, of course, no reason for conflict.Every country in Asia -apart from North Korea -is steadily getting wealthier and more secure. But lessons over the past century -from World War I to the present crisis in Ukraine -tell us that if politicians have the fire of war in their bellies, booming economies count for nothing. China's behaviour in recent years indicates that this might be the case -however illogical and absurd it might seem.

India, though, is well placed to face it down. Its weakness is that China has more of just about everything in military hardware. Its annual defence budget of $131 billion is nearly three times that of India's $46 billion. But its strengths are the creative hi-tech geeks who, given a chance, will give the PLA's unit 61938 a run for its money in electronic combat. India also now has a strongly mandated leader who appears to know his mind and, for the first time, is not beholden to a parliamentary coalition or a dynastic legacy. Prime minister Modi, an Indian nationalist, can do what he wants.

It might be wise, therefore, for Xi to hold his tongue about regional war, not the least because it shows a reckless immaturity of global leadership. Supposing every world leader routinely rallied his armies to prepare for war. Then, surely, sooner or later, war would happen. And, in Asia, up against the nuclear weapons, computer geeks and foot soldiers of India, America, Japan, South Korea and probably Vietnam, China might well lose.

It's time for Jinping to scratch that war itch off his face.

The writer is a BBC correspondent and author of Dragon Fire 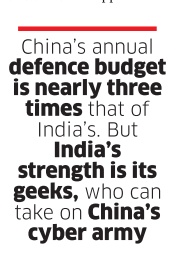 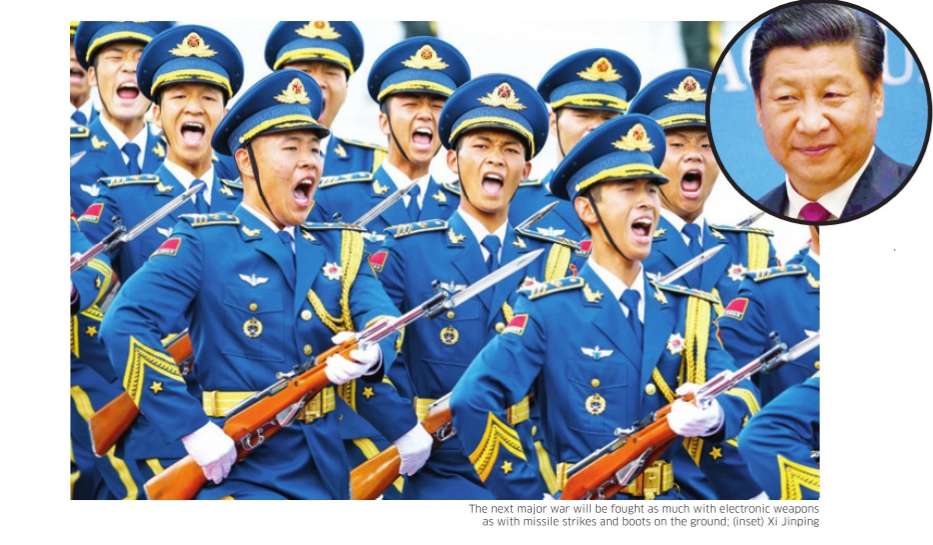 Thousands of Indian-American supporters of Prime Minister Narendra Modi are lining up excitedly outside the iconic Madison Square Garden here to listen to his eagerly awaited speech. 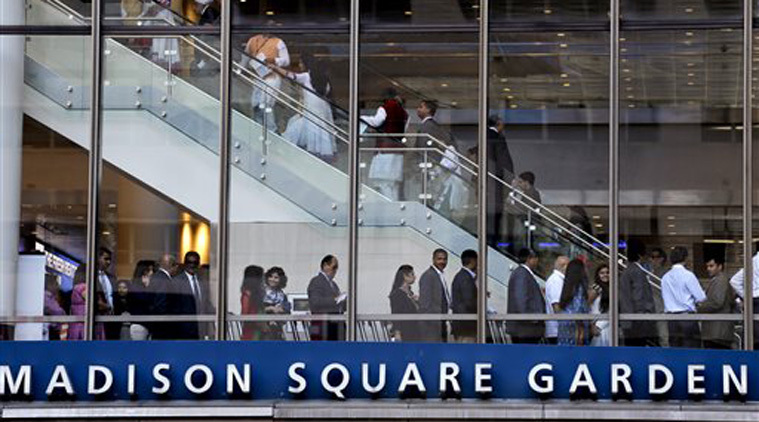 Indian-American men, women and children wearing colourful Indian attire have gathered to greet the prime minister since early morning to hear him speak with long lines of people waiting to enter the venue.

Modi's fans were seen carrying the Indian tricolour and wore traditional Indian garb with several groups of performers carrying drums and 'dhols' to give him a rousing welcome.

8.26 pm: Miss America Nina Davuluri is MC for this event.

8.28 pm: The event kicked off with artists performing a number from Sharukh Kahn's 'Chakde India' and Bruce Springsteen's classic 'Born in the USA'.

8.43 pm: Playback singer Kavita Krishnamurthy begins her performance with "I Love My India".

9.00 pm: Members of Alliance for Justice and Accountablity holding a protest against Prime Minister Narendra Modi outside Madison Square Garden in New York on Sunday. 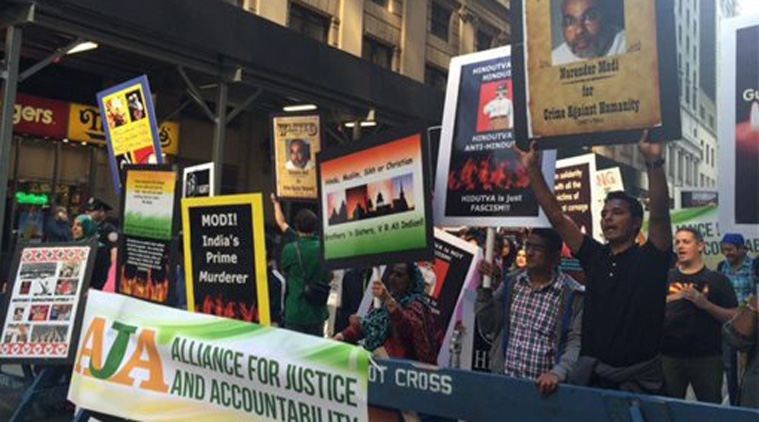 9.10 pm:  Supporters of Prime Minister Narendra Modi fill Madison Square Garden before before a reception by the Indian community in honor of Modi's visit to the United States, Sunday, Sept. 28, 2014, in New York. 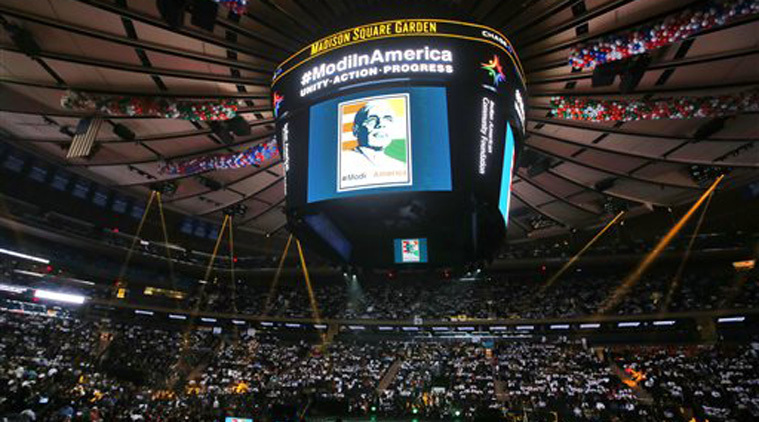 Excitement builds up at Madison Square before Modi's speech.