Land bill hearing score: one for, 33 against

Land bill hearing score: one for, 33 against

New Delhi, June 28: A joint parliamentary panel examining the Narendra Modi government's land acquisition bill has been flooded with objections to the proposed legislation from those who have deposed before it so far, sources have said.

The Confederation of Indian Industry is the only one among 34 individuals and organisations to have supported the changes the bill seeks to make to the current law, passed in December 2013 under UPA rule, the sources added.

"An overwhelming majority among the 502 email representations the committee has received too have opposed the bill," a source said.

The 30-member panel, drawn from both Houses and headed by BJP member S.S. Ahluwalia, will hold a last round of public interactions on June 29 and 30. It has to hand its report in before the monsoon session starts on July 21.

In the previous session, the government failed to get the bill through the Rajya Sabha, where it lacks the numbers, in the face of a largely united Opposition that has dubbed the bill "anti-farmer". It had, therefore, to reissue it in ordinance form.

Most of the objections the panel has received relate to the provisions that make the social impact assessment (SIA) and landowners' consent optional for certain kinds of projects and dilute the five-year deadline after which any unused land must be returned. (See chart) 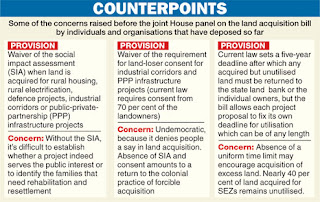 Sources said Ram Singh, a Delhi School of Economics professor, was one of those who had deposed before the committee.

Contacted by The Telegraph, Singh refrained from going into the specifics of the position he had taken before the committee but explained his general concerns about the bill.

He said that dropping the SIA and the five-year deadline to begin land utilisation could lead to excess acquisition.

An SIA surveys the families living in and around the project area and identifies those that would be affected by the project and to what extent. An SIA is mandatory for all land acquisitions under the current law.

"One key objective of the SIA is to ascertain whether a project indeed serves the public interest. There's no other way to find that out," Singh said.

The dilution of the provision for land-losers' consent has been tagged "undemocratic" by the All India Democratic Women's Association (AIDWA), the women's wing of the CPM.

"It removes people's right to have a say in land acquisition. The SIA and consent (requirements) should apply to all projects," said Archana Prasad, a JNU professor who was part of the AIDWA delegation that met the panel.

Singh said the government should not acquire land for public-private-partnership (PPP) or private projects. In a research paper, he has cited instances of direct land purchase by industry, such as the Kakinada Special Economic Zone in Andhra Pradesh buying over 4,000 acres directly from farmers.

Singh said multi-national companies produce different parts of a product in different countries and assemble them later but Indian companies tend to do everything at one place and therefore need more land.

P.S. Krishnan, a former secretary in the erstwhile welfare ministry and an expert on issues of social justice, has written to the panel saying acquisition of tribal land in scheduled areas should be avoided.

He suggested extending the same provision to the Dalits as well as tribals living outside the scheduled areas -that is, areas dominated by tribals in central, eastern and northeastern India.

Posted by Palash Biswas at 1:37 AM