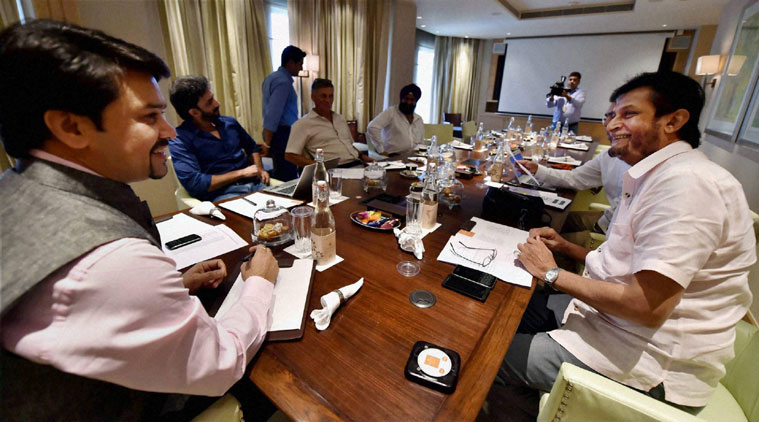 LaMo dares the sheds of blue which is claimed to be the color against him and warns to get every scoundrel in British court responsible for his status controversy as he names the Big Players of the IPL Casino in his latest interview.He claimed that no chargesheet ever filed against him and he would sue if anybody calls him fugitive!

The Iron Man in the wings warned for an imminent emergency like calamity,might it be media censorship.It seems to come true as the skin is exposed at so mass level that every other man or women belonging to the Billionaire Millionaire class and the whole lot of corporate lawyeres, a tip of the iceberg from the fastest growing realty sector is branded NAKED.

As LK Advani advised,no one seems to step down as RSS umbrella of fascism unprecedented is potential enough to consume every other color than the saffron.Rather we have to witness perhaps the parliamentary consensus for an emergency or media censorship.

Quite a rainbow hangs around while LaMo blasts continues and the aftershocks put the polity as well as economy in turmoil and LaMo has warned to blast daily! Mind you,Daily!

Provided LaMo is the fugitive what stops the governance of fascism to get him back to try and let the law work!

The BCCI on Monday said that since the players play international cricket, they fall under the jurisdiction of ICC.

The BCCI on Monday gave a clean chit to three international cricketers, who were accused of accepting bribes from a Mumbai-based businessman by ousted IPL commissioner Lalit Modi.

BCCI secretary Anurag Thakur said "there is nothing in it" when asked about the ICC acknowledging a letter from Modi in June 2013, claiming that two cricketers from India and a West Indian were paid in cash and kind to the tune of Rs 20 crore each.

"Lalit Modi had written a letter to ICC, so they informed BCCI about the letter. The three players are international players and fall under the international jurisdiction. There is no information on these players from ICC so far, so it is in a way a clean chit for them to play," said Thakur.

"The ICC has sent a press release, they had informed BCCI about the three players.When somebody plays international cricket, the ICC is responsible. Only the ICC can answer as per their investigations. It falls under ICC's purview. They have said that they are inquiring, so only they can answer on this."

"If there was anything, they could have reported back to us," he said further on the controversial issue.

The acknowledgement of Modi's letter came only on Sunday from the ICC.

"The ICC confirms that Mr Modi's confidential e-mail, which was received in June 2013, and which has recently been published on Twitter, was provided to the ACSU at that time.

The ACSU handled that information in accordance with its standard operating procedures, which included sharing it with the BCCI's anti-corruption unit," the ICC had said.

On IPL, Thakur was asked about the identity of the player who was approached for spot-fixing ahead of the 2015 edition.

"We don't disclose the name of the players. If a player has been approached, we report it to the anti-corruption unit."

"We have to look at the detailed report. Once the final report comes in then we will take action. As of now, enquiry is still not over," Thakur added.

In an exclusive interview with India Today TV's Consulting Editor Boria Majumdar in London, Modi asked, "Why is Srinivasan the head of the ICC anti-corruption branch?" Srinivasan, former chief of the Board of Control for Cricket in India (BCCI), is also the owner of IPL franchise, Chennai Super Kings.

Refusing to go down without a fight, an unplugged former IPL commissioner Lalit Modi on Monday attacked his bete noire and current International Cricket Council chairman N Srinivasan and the Enforcement Directorate (ED) for the massive controversy surrounding him and dared the government to make the report of the Justice Mudgal committee, which probed the IPL scam, public.

In an exclusive interview with India Today TV's Consulting Editor Boria Majumdar in London, Modi asked, "Why is Srinivasan the head of the ICC anti-corruption branch?" Srinivasan, former chief of the Board of Control for Cricket in India (BCCI), is also the owner of IPL franchise, Chennai Super Kings.

Claiming that he is not behind the leak of the emails to the ICC in which three players were named for IPL spot-fixing, Modi said, "The BCCI leaked my mails to the ICC because of internal politics. If I had wanted to do it, I would have done so three years ago."

Modi also dared the government to make the names of those implicated by the Mudgal panel, which investigated reports of match and spot-fixing in the IPL, public. "Why have the names not been revealed? The nation wants to know."

When asked about him being a fugitive in the eyes of the Indian law, Modi said,

"Please be careful while using the word. On what basis am I being called a fugitive? Is there any case pending before a court of law in India against me?"

On why he refuses to return to India and face the allegations, the 49-year-old former IPL czar said he continues to live in the UK owing to security fears. "The only thing stopping me from coming back to India is the security issue. Why did (former Finance Minister) P Chidambaram withdraw my security after I testified against Shashi Tharoor?"

Modi challenged the ED, which is investigating cases of money laundering and FEMA violations against him, to produce evidence. "I challenge the ED to produce any evidence against me," he said, claiming that he gave the ED all the papers which led them to make a case against the BCCI.

His last words? "I am not done yet. You will see more to come from me in the coming days. I am not going to take all the bullets and not fight back," he said.