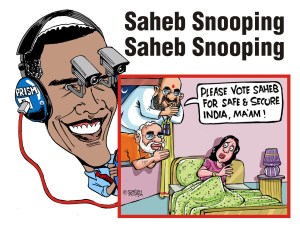 A Constitution Bench of the Supreme Court of India is to pronounce whether the right to privacy is a fundamental right or not. A three-judge division bench hearing the constitutional validity of the Aadhaar project referred the matter to the Constitution bench on the request of the attorney-general, Mukul Rohatgi. Earlier, his argument before the apex court in defence of Aadhaar, that the right to privacy is not a fundamental right, triggered a storm. Adding grist to the mill, theUnion government banned 857 porn sites, only to backtrack later before the Supreme Court, when the nation grizzled against it as invasion into their privacy. Realising its folly, the government told the court that it was not a totalitarian state and that it "does not intend to become the moral police of the people".

When the AG pleaded before the court that right to privacy is not a fundamental right, he was basing his contention on the Supreme Court's judgments in M.P. Sharma v. Satish Chandra (1954) andKharak Singh v. State of UP (1962), where the court held that "…when the Constitution makers have thought it fit not to subject such regulation to constitutional limitations by recognition of fundamental right to privacy, we have no justification to import it… by some process of strained construction."

It appears that the Supreme Court was not aware of the debate on the issue in the Constituent Assembly. The Congress' Kazi Karimuddin had moved an amendment in the Constituent Assembly on the lines of the Fourth Amendment of the US Constitution, but it was defeated. However, Dr B.R. Ambedkar supported it: "I think it is a useful provision and may find a place in our Constitution." Besides, the Preamble also talks of "fraternity assuring the dignity of the individual".

In Kharak Singh's case, Justice Subba Rao, among the five judges of the Constitution Bench, wrote in his dissenting judgment that right to privacy is an essential ingredient of personal liberty.

Right to privacy, thus, is an inalienable part of right to personal liberty guaranteed by Article 21 of the Indian Constitution but it's not explicitly mentioned as a fundamental right.

Most common law Constitutions do not bequeath right to privacy to their citizens. In the US, courts did not protect this right until the fag end of the 19th century. This right was recognised when Charles Warren and Louis Brandeis published their seminal article, The Right To Privacy, in the Harvard Law Review (1890). Though hundreds of cases related to right to privacy came to the courts, the first higher American court to deal with this right was a New York appellate court in Roberson v. Rochester Folding Box Co. (1902). Chief Justice Parker ruled that the defendants had invaded what is called a "right to privacy", in other words, the right to be left alone.

There is no consensus over the definition of privacy. For Professor Michael A. Weinstein, privacy is a psychological state, a condition of "being apart from others", and for American jurist Charles Fried, privacy is a form of power, "the control we have over information about ourselves".

Ancient Indian law-givers declared "Sarve sve sve grihe raja" (Every man is a king in his own house). Indian classical literature and epics expounded the law of privacy with this concept as the central theme, and the king, under a moral obligation to uphold dharma, had to respect the privacy of the citizen. In the Mahabharata we find how privacy was respected. Draupadi was the common wife of the five Pandava brothers. To avoid embarrassment, a rule was made that if any one of them happened to see Draupadi in company of another brother he would have to undergo banishment for 12 years in the forest as brahmachari. Once it so happened that while Draupadi was with Yudhishthira in a room, Arjun had to collect his weapons kept in that room. Not finding any alternative, Arjun intruded their privacy, violating the rule and presenting himself to undergo the prescribed punishment.

Indian traditions and customs have always respected this kind of privacy, and the Indian courts were ahead of British and US courts in protecting this right. In 1888, Chief Justice John Edge of the Allahabad high court observed, "In my opinion, the fact that there is no such custom of privacy known to the law of England can have no bearing on the question whether there can be Indian usage or custom of privacy valid in law."

Advocating the right to privacy for British nationals, Professor Percy H. Winfield passionately appealed to the House of Commons in 1931 to follow the Indian law. Section 509 of the IPC, 1860, makes it a crime to intrude into the privacy of a woman. It was not imported from England, nor a novel contribution of Thomas Babington Macaulay, but was just a codification of a long established tradition in India.

Yet, the government is ready to introduce the DNA Profiling Bill in Parliament soon. The bill will give teeth to criminal investigations as it will allow the use of forensic science to identify a person using the unique signature found in his/her DNA. But there is no safeguard against the misuse of data proposed to be collected under the bill.

A group of experts headed by former Chief Justice of the Delhi high court, A.P. Shah, recommended a framework for a Privacy Act which would recognise all dimensions of the right to privacy and address concerns about data safety, protection from unauthorised interception, surveillance, use of personal identifiers and bodily privacy.

The Supreme Court has, in its interim order, directed that the Aadhaar number can be used for PDS and LPG subsidy, but is not mandatory for any other purpose. Thus reiterating that safeguards against the misuse of biometric details of people are necessary before they are collected.

The writer is a senior TV journalist and author

--
Pl see my blogs;
http://ambedkaractions.blogspot.in/
http://palashscape.blogspot.in/
Feel free -- and I request you -- to forward this newsletter to your lists and friends!
Posted by Palash Biswas at 2:18 AM