SOVEREIGN Market Settles for Oil Freedom!For the Time Being! The Masses Deprived of Purchasing Plastic Money Power Have NO RIGHT to Live in Free Market Democracy! 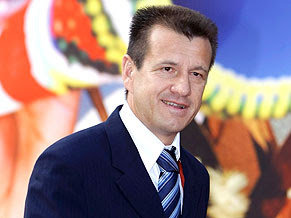 Dunga and co could be in for a tough time in the group stage of the World Cup in South Africa next year. Group G consists of Brazil, Portugal, Ivory Coast and North Korea and will not be an easy ride for the South Americans. Brazil kick off their campaign against North Korea in the Ellis Park stadium in Johannesburg. Their second match sees them take on Ivory Coast – a side that includes Didier Drogba, Salomon Kalou, YaYa and Kolo Touré. Brazil's final game is against Portugal. In an interview after the draw, the Brazil coach discussed the meeting with Portugal: "it's Brazil against Brazil. Brazil A against Brazil B", he said, referring to the number of nationalized Brazilians playing for the Europeans.

Dunga went on to say: "It's a difficult group. We have to respect all of our opponents … ".

9 Comments Add your own

Contact – I do reply to most emails. So, if you haven't had a response after a few days, check your spam folder. You can also leave a question in the comment sections

9.25 pm: Thank you for being with us. We hope you enjoyed our 'coverage'

. See you at the next big battle! Let's rejoice in the beautiful game, get together at the end of the day. Wave your flag, everyone!

9.18 pm: 5 minutes of stoppage time. And Eduardo saves another!

9.10 pm: Ten minutes to go, and this game doesn't seem to want to go anywhere.

9.08 pm: A colleague said this would be a 'climax' of an encounter (he used a synonym that we're not mentioning here) – somehow, doesn't seem like it, no?

9.07 pm: The chips are down in the bar – we can't hear anything but the vuvuzelas.

tear-filled corner of the bar, this.

8.54 pm: Impending heartbreak, people – either for half of the world, or for the entire world.

8.46 pm: Brilliant shot from Simao and a great save from Cesar!

8.39 pm: Chigateri is not really bothered about who wins tonight – as long as Germany wins the WC, he's fine, he says. Boo!

8.24 pm: The crowd is singing along to Waka Waka and Wavin' Flag. It's now Ole Ole time!

8.20: Deepika from Pondicherry is at our table and is cheering for Brazil, because "All Brazilians are hot and sexy!" She likes Ronaldo, too!

8.15 pm: Half-time. A half-pleased Ronaldo walks off the field. Thanks to Portugese goalie Eduardo for some brilliant saves.

8.13 pm: In a very Karan Johare-esque twist, Melo gets a yellow for elbowing Pepe. Bad-refereeing, screams the crowd here. And a minute later, Melo gets replaced by Josue.

8.10 pm: Portugal mid-fielder and former Real Madrid's Pepe gets a yellow card for a foul on Mello. Portugal's 2-1. Yellow card-wise.

8.07 pm: Hahaha! No, Brazil doesn't. Bongopondit on Twitter says: Tiago needs to attend the Italian spring training camps before the World Cup. An amateur effort like that actually deserved a red card.

7.57 pm: Juan of Brazil gets a yellow card for a handball and Duda of Portugal gets the same treatment for protesting. One all.

7.52: Muted lights, loud cheers, wine and beer on the table and football on TV. Could life be better?

7.50 pm: Carol in the comments says Ronaldo is awesome and sxy. We don't know about sexy, hon, but awesome he is!

7.47 pm: Tiago misses a shot and there's a loud groan from the Portuguese half here, mostly women

7.44 pm: Received an interesting SMS – so this girl asks her boyfriend who she's cheering for – Brazil or Portugal. Girl power!

7.40 pm: A lot of support for Brazil in the comments – the ladies in our team do not agree with you. Portugal!!!!

7.35 pm: Danny Alves of Brazil, known as "The Beast", misses a shot and there are loud cheers from the Portuguese supporters and a collective "Noooooo!" from the Brazil fans! Did we tell you our team is divided too?

7.33 pm: A lovey-dovey couple here are divided in their support for the teams – she supports Brazil and is disappointed that Kaka isn't playing. And the boyfriend swears by Portugal, but isn't too fond of Ronaldo.

7.28 pm: Anthems have been sung and the field is ready for the taking!

7.21 pm: Lohit from Tommy Hilfiger is cheering for Portugal, and thinks Tiago is going to win the match for Portugal tonight! Do you agree?

7.18 pm: Singing along to Wavin' Flag – Shakira, honey, can you bellydance to this song?

7.15 pm: The crowd here seems to be equally divided – the screams for both teams shattered our eardrums!

7.12 pm: The TV tells us that Brazil lineup has Baptista, Alves in the middle and Nilmar playing upfront. Fireworks!

7.07 pm: We've arrived, and the atmosphere here is electric. Though we must say, the music is so loud that we can't hear each other speak!

All right, here we are! Portugal takes on Brazil in one of the highly anticipated clashes of the group stage at WC 2010. Cristiano Ronaldo's Portugal, on a high after their fashionable win over North Korea, will be eager to produce another winning performance to claim the top spot of Group G.

It will be a welcome opportunity for World Cup favourites Brazil to triumph over their former colonial masters while Portugal will be desperate to better their dismal head-to-head record against the former. Portugal have won only four times in their 18 attempts over the five-time World Cup winners, two of those coming in the last three encounters.

If Brazil wins, they will top the Group of Death and they will be facing the runners-up of group H. However, Ronaldo and men can take it easy as even if they lose and Ivory Coast wins today, Portugal will anyway move to the next round as they enjoy a massive goal advantage over Drogba's Cote d'Ivoire.

Though Brazil could find themselves in a bit of a spot thanks to Kaka's absence, they have Julio Baptista, Daniel Alves, Ramires or Kleberson to play in his place. Plus, all is well as long as 'Mr Dependable' Maicon, who can fire a shot from any range, is there to cover them. However, though the fate of Group G is almost decided, both teams are not going to take any chances here as a win means facing a less threatening team from Group H.

You can never write off the calibre of Portugal. Though they had a sluggish start, they made an awesome comeback by crushing the Korean squad with a massive margin of 7-0. The same happened during the qualifiers also. Plus Cristiano Ronaldo seems to have found his form back and coupled with the brilliance of Tiago, they can crush the 'Canarinhos'. Carlos Queiroz and his men are here to create history and they know no fear, so keep a close watch on Ronaldo's men.

Who will it be? Portugal or Brazil? Tune in as we liveblog the match from one of Bangalore's happening sports bars, Xtreme – comment, tweet, share and join the fun!

Posted by Palash Biswas at 9:14 AM