Opposition died! Long live the Opposition! We are amidst war situation and the ruling parties across the political borders have made us warring nations. 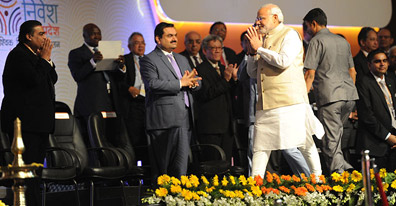 Prime Minister Narendra Modi on Thursday said $100 billion worth of foreign investments is knocking at the doors of India and it is up to the states to lap up as much as they can.

Parliamentary democracy may not survive without opposition.In India,the Opposition is  died! Long live the Opposition!

In the wake of intensifying ceasefire violations along the border in Jammu and Kashmir, India has cleared that talks with Islamabad will not be possible unless Pakistan stops cross-border firing.

According to reports, New Delhi has responded strongly, conveying the Indian leadership's resolve and ability to deal with Pakistan.

Escalating their operation, the Pakistani troops on Wednesday continued to target security outposts along the entire 192-km International Border in Jammu and Kashmir.

Parliament has become quite irrelevant as the Opposition exists no more.Scams are dismissed one after one without any storm whatsoever.Reforms activated without parliamentary clearance.

Legislation executed without any debate and the government declares policies on foreign land to protect foreign interests.The Prime Minister announces in America to throw all laws hitherto into the dustbin as it no mere suits free low of foreign capital.

Policy making is wholesale affair concerned to expert committees represented by the private sector subjective to corporate lobbying and it is endorsed by the parliament without disturbing the government without mandate.

It is free market economy and it is minimum governance.

Ninety percent of forest land has to be gifted away to multinational national companies without hearing whatsoever,without environment clearance,violating supreme court orders, killing fifth and sixth schedules of the constitution and finally displacing the nature associated people enacting racial ethnic cleansing and waging a constant salawa judum war against the people.No one dares to protest as the act is branded to be cidition, a war aginst the governement.

We have not seen any opposition whatsoever which deals with public issues and always in a default mode of identity based vote bank equations.

The Ruling party and the opposition seem to be just two sides of the same coin in the states and in the center.All representatives suddenly get rich and have to become billionaires.

All political parties have to be funded by corporate houses.Itis consensus overwhelming killing the opposition.

Suddenly we have enhanced our latest status as we have elevated ourselves as a war economy and making in America.

The opposition sacrificed opposition to achieve the goal and the mandate is manipulated accordingly as opposition is doing everything for the win of a specific set of rulers who may serve their interests.

It is a WWF scenario as Congress quite willingly handed power to Shaffron Modi brigade as it could not launch second generation of ethnic cleansing which is called reforms.

No issue related to agrarian,professional,business communities have to be addressed at all.

No issues relating labour, women, students and children are addressed.

No issues related to civic and human rights are addressed.

It is blind communal religious identity nationalism which is the politics of modern India.

For instance, National security and internal security is handed over to Reliance and other private companies making Indian emerging market an emerging war economy americansed.

Nevertheless,Under fire, Prime Minister Narendra Modi on Thursday launched a counter offensive against Congress and NCP on ceasefire violations by Pakistan, saying such issues should not be dragged into political discourse as he hauled them over the coals over corruption in Maharashtra.

NCP boss and former Defence Minister Sharad Pawar was the butt of Modi's criticism as he continued to hit the campaign trail for Maharashtra Assembly poll with a vengeance despite being dubbed an "absentee" Prime Minister by Congress.

"When you were the defence minister, there were problems with Pakistan and China on the border. Did you ever bother to go to the border then?"

"There have been terror strikes in Maharashtra during your tenure... Mumbai, Malegaon, Pune. You could not even reach the terrorists, leave alone catching them. In the spirit of patriotism, we never politicised the issue," he told an election rally at Baramati, Pawar's pocket borough.

Modi was responding to Pawar's criticism for holding a string of election meetings despite the tension on the border following repeated ceasefire violations by Pakistan that have caused civilian casualties.

The latest developments should be noted!

Indian express reports:An Italian court on Thursday acquitted former Finmeccanica CEO Giuseppe Orsi and former AgustaWestland head Bruno Spagnolini of "charges of international corruption" in the Rs 3,600 crore VVIP chopper deal with India. The court, however, convicted and sentenced them to two years in prison on the lesser charge of "false invoicing" in the case.

"Former Finmeccannica CEO Giuseppe Orsi and ex-AgustaWestland head Bruno Spagnolini were acquitted of charges of international corruption in relation to alleged bribes paid to land a contract to sell 12 helicopters to the Indian government," Italian news agency Ansa reported. It said Orsi "was convicted of false invoicing… and sentenced to two years in prison, along with Spagnolini."

On July 29, the prosecution had "shelved proceedings against Finmeccanica for alleged corruption in the sale to the Indian government of 12 AW-101 helicopters made by its AgustaWestland subsidiary".

Ansa had then reported that "the prosecution found the company had nothing to do with the alleged corruption". Quoting a statement by Finmeccanica, it said, "AgustaWestland has agreed to pay a fine, while reiterating it knew nothing about the alleged bribery."