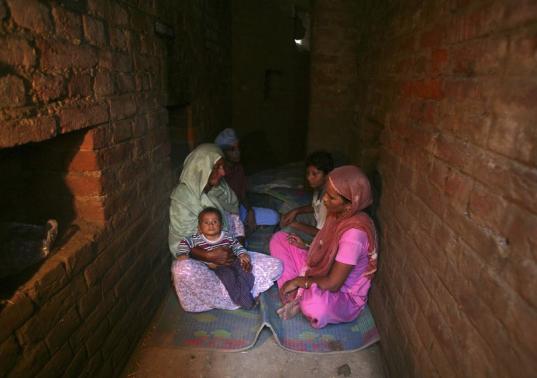 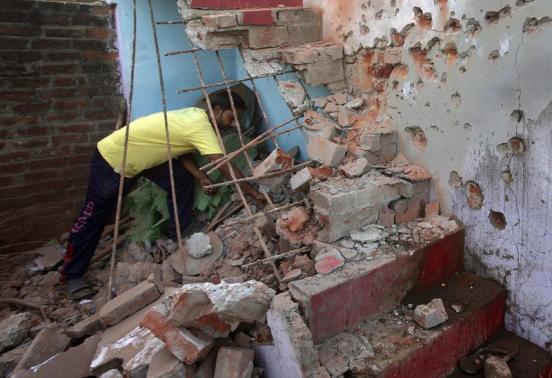 1 OF 3. Indian villagers take shelter inside an army bunker at Devi Garh village near Jammu October 7, 2014.

Indian Incs as well as Anti Democracy Pro America Pak Spring supported by army urgently needs  Indo Pak conflict.Hence, Fighting intensified between India and Pakistan in the disputed Himalayan region of Kashmir on Wednesday, wounding a dozen along a more than 200-km (124-mile) stretch of border.

Indira Gandhi had been the goddess supreme for Dhiru Bhai Ambani who helped her to win the corporate war against Nusli Wadia and journalist like Arun Shourie,world bank return could not spoil his game.Indira made the pillars of Reliance empire,but the fact remains, global Hindutva made the empire global.

Mukesh Ambani and sibling Anil Ambani were not fools as they crossed fence and sacrificed his fathers great relationship with Congress and declared Narendra Bhai Modi,the King of the heaven at the occasion of vibrant Gujarat long before the Lok sabha election.

Here you are.Reliance is the master of growing Indian war economy as Modi makes in an America in India at the cost of Indian people, Indian democratic republic,democracy itself,Indian constitution, Indian security and internal security,green, civic and human writes privatising everything ,even the sovereignty of India,the defence for which he opted for a corporate defender in the high profile defence minister tagged with finance,making the Gujarati PPP Hindutva model single window apps technically.

Now the great Indian dragon enters the scene and scenario turns to be relance empire.It is the climax of magic Indian realism,of course.As so much so hyped it is that Narendra Modi has launched an ambitious plan to streamline a bloated and inefficient welfare system by paying for everything from cooking gas to university stipends via a bank account, in a bid to save billions of dollars a year. But resistance among more than 800 million people entitled to subsidised food is high.

The shafron PPP Gujarati ends in a war economy so fast as Modi quickly makes an America in India.

What a wonder friends! A small change in foreign investment rules-by doing away with minimum 51% holding by a single Indian entity in a defence venture-has helped Mukesh Ambani's Reliance Aerospace and Punj Lloyd bag licences that they had been waiting for.

The Licensing Committee, chaired by Secretary in the Department of Industrial Policy and Promotion (DIPP), has cleared these long pending applications last week and granted industrial licences to them, an official statement said.

The 33 projects include 14 cases whose applicants have been informed that licences were not required anymore as a vast number of defence items have been delicensed, it added.

"It has been possible to approve these cases as a consequence of the simplification of FDI policy," the release said, adding that the development would give a big boost to 'Make In India' campaign which seeks to make the country a hub for global manufacturing.

The Narendra Modi-led government has liberalised the FDI policy in the defence sector by hiking the cap from 26 percent to 49 percent.

India imports up to 70 percent of its military hardware.

According to sources, the decision is expected to result in investments of billions of dollars.

The Licensing Committee also discussed the possibility of removal of stipulation of annual capacity in the industrial licence as also to permit sale of licensed items to other entities under the control of Home Ministry, state governments, PSUs and other defence licensed companies without requiring approval of the Department of Defence Production.

"It was agreed that the above stipulation would be relaxed subject to submission of bi-annual returns by the unit. The DIPP would be shortly notifying the above decision by issue of a Press Note," the release said.

"Giving a big boost to 'Make In India', the Licensing Committee chaired by Secretary, Department of Industrial Policy & Promotion (DIPP), said it last week cleared 19 proposals for grant of industrial licence," the Commerce and Industry Ministry said in a statement.

In addition, applicants in 14 pending cases have been informed that licences were not required anymore as a vast number of defence items have been delicensed, it added.

Many of the 19 proposals, have pending with the government for last several years.

"It has been possible to approve these cases as consequence of the simplification of FDI policy," the Ministry said.

As per the liberalised policy, the FDI cap in defence has raised from 26 per cent to 49 per cent.

It also permitted portfolio investments of up to 24 per cent of the total equity of the investee/joint venture company under automatic route and doing away with requirement of 51 percent equity ownership by a single Indian investor/company.

India imports up to 70 per cent of its military hardware.

The mostly Muslim Himalayan region of Kashmir is claimed by both India and Pakistan and has been a major focus of tension in South Asia. The nuclear-armed neighbours have fought two wars over the territory and there have been regular clashes along their de facto border, known as the Line of Control.

Thousands of Indians living in Indian-controlled Kashmir have fled their homes as the fighting moves to civilian areas. The shooting, which started more than a week ago, has seen some of the most intense violence between the two nations since they agreed a border truce in 2003.

Indian and Pakistani politicians have accused each other of unprovoked violations of their border truce, as goodwill that had built up after Prime Minister Narendra Modi took office in May evaporates in the face of weeks of sporadic fighting.

"It is very unusual that we are seeing both sides targeting civilian areas and buildings," said S. Chandrasekharan, director of the South Asia Analysis Group in New Delhi. "At the moment neither side seems willing to back down."

NEW DELHI: A small change in foreign investment rules-by doing away with minimum 51% holding by a single Indian entity in a defence venture-has helped Mukesh Ambani's Reliance Aerospace and Punj Lloyd bag licences that they had been waiting for.

While increasing the foreign direct investment (FDI) cap for defence to 49%, the government did away with the clause that had been in the policy for years, as part of a strategy to attract investment in local manufacturing units. In special cases, 100%FDI has been allowed. The earlier rule did not allow Reliance Aerospace to get the licences to manufacture weapon launchers for combat aircraft as the promoters hold 45.3% in Reliance Industries. Similarly, the promoters of Punj Lloyd together have a 37% stake, which restricted a wholly owned subsidiary's ability to bag licences to manufacture torpedoes, rocket launchers and combat vehicle, sources familiar with the development told TOI.

While the government did not disclose any details, an official statement said that a committee had cleared 19 proposals from several large Indian corporate houses - including the Tatas, Mahindra and Bharat Forge - to bag licences for defence manufacturing.

In at least 14 other cases, the government has informed companies that licences are no longer required. These included Tata Advanced System's proposal to manufacture aircraft and spacecraft components, Mahindra Aerostructure, which wants to make parts of aircraft and Reliance Aerospace's flight control system manufacturing plans. Even before FDI rules were changed, the department of industrial policy and promotion had reduced the number of items in the defence sector that need licences and freed dual-use items, such as radars and aircraft components that have civilian use too, from licensing requirement. 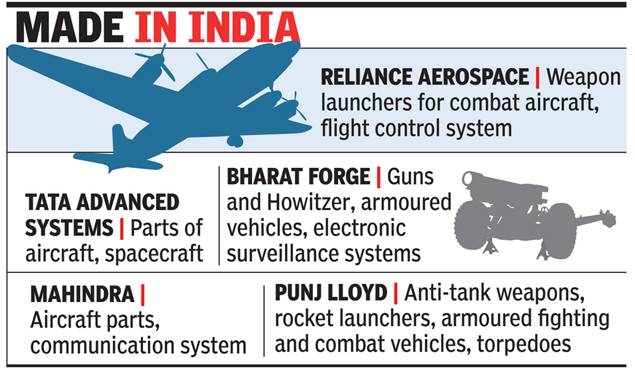 For years, the defence ministry has frowned upon the entry of the private sector into the arena even as it had relied on imports, often involving middlemen. In fact, during UPA's term in office, the commerce and industry ministry's plea to increase the FDI cap for the sector was repeatedly blocked by A K Antony, the then defence minister. In recent months, however, the mood has changed as the department of defence production has backed private and foreign capital in local ventures.

Now, the government is working on further easing the rules, including doing away with annual capacity ceiling in industrial licences and also permit of sale of licensed items to other entities under the control of the home ministry, state governments, PSUs and other valid defence licensed companies without approval.